While there are only a small percentage of actual confirmed cases of person's iPhones bending, this issue has now been featured (& blown out of proportion) in newspapers, in prime-time news reports and of course all over social networks.

Why doesn't Apple just release a statement saying that only a few persons are affected and offer them a replacement (and a goodie)?

I think this will put things into perspective for the media.

Should not answer, would be a terrible mistake.

I'm sure they are in Cupertino carefully plotting their response. It took awhile for them to hold the mini-keynote for the iPhone 4 "holding it wrong" problem.

Be interesting to see if/how they respond.

They should ignore it, and people should stop making new threads about it.
F

i would love to see what comes after #bendgate

maybe #hammergate where the iphone is shown to break if slammed with a hammer.
H

That would be detrimental for Apple to do that. Social networking has made it very easy to spread FUD. One person with an issue or one person with an axe to grind with Apple or one person that's an Apple hater could go on Twitter or Facebook and post. This can easily turn into many other people of the same types I mentioned earlier.
It doesn't take long for something to fester on Social networking even if it's just a small amount of people or even one person trying to put a big company on blast.

Now personally, I have zero respect for the way this "Bend BS" has been handled. The guy that used much force to bend that iPhone 6 plus seems to be getting a lot of support. I can't believe so many people here are supporting that. That's ridiculous. You can damage anything by using force. Then people are putting the phone in their back pocket and sitting on it. What the hell are people expecting to happen?

It's very frustrating to see the media support people that do this but that's what's so magical about Social Media. I can understand if something is functionally wrong with the product but to deliberately break it and put Apple on blast is something I simply can't support and Apple should not either.

6 days after launch? No.

Unless there is absolute irrefutable mass validity to the bending claims, Apple should not comment.

Unless there is absolute widespread malfunction, as with iOS 8.0.1, they will monitor any claims quietly as they seem to always do.

No. Just loosen the exchange policy in the stores so that every social media story about it ends with the bent phone getting exchanged without a fight.

Anything more than than that will just start the news cycle all over again.
S

absolutely yes. competitors already taking jabs and good for them. 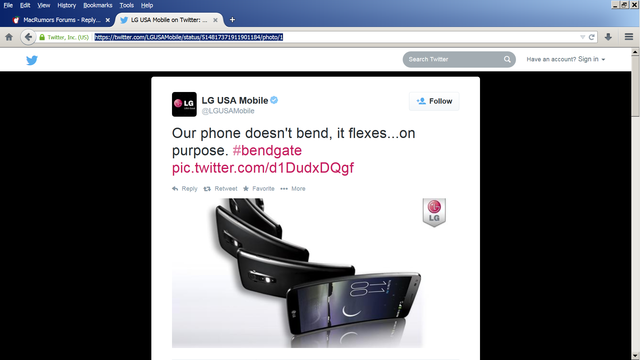 FrozenDarkness said:
i would love to see what comes after #bendgate

maybe #hammergate where the iphone is shown to break if slammed with a hammer.
Click to expand...

Apple will quietly replace the bent phones without comment. Even if they have to replace thousands, because Apple never releases how many are replaced. News is fleeting and bendgate will be a one day headline. just like the GM ignition scandal which cost lives. Or the NFL debacle. They are not front page anymore. It's now on to the war against ISIS. Next it will be another celebrity scandal. Fleeting, very fleeting and Apple knows it.

And my opinion is no they shouldn't say anything. This is an idiot problem, not a 'bendgate' problem

Maybe a PSA by a third party:

"Your phones are not indestructible. Stop sitting on them."

They should just say that any issues would likely be covered under warranty, depending on specific circumstances. One of their support reps kind of already said it and that message is now starting to be posted around the web.

They should say "you're sitting on it wrong". No they shouldn't say anything. It's ridiculous. Common sense tells you not to sit on the long aluminum thing in your pants.
P


So after four days, I have a slightly bent, slightly scratched phone. Which means that, while this is the best hardware Ive ever usedfrom the processor to the camera to the displayIm worried about durability.

And look, for me this isnt such a big deal, because I didnt pay for the phone. Its a loaner, sent over by Apple. But if I had paid $1,000 for this phone off contractor even $300 for the smallest version with a new two year contractI would be pretty irritated. I certainly would be in line for a replacement.
Click to expand...

planeluvr said:
Apple iPhone 6 Plus
The WIRED iPhone 6 Plus Review: Too Big to Fail, But Not to Bend
Click to expand...

Although he admits in the same review (directly in the previous sentence to the one you posted actually) that he probably did sit on it. Amazing.

Also, Apple says a grand total of 9 people have reported this as an issue. Out of the 10 Million or so that have they have sold. That's a 9 x 10^-7 defect rate. I can live with that.

I honestly believe that the people who are claiming that it bent from regular use in their front pocket are either forgetting sitting on it / dropping it, or they're flat out lying. Mine was stuffed in my front pocket for 3 days of training classes last weekend, sitting for 8 hours a day. It was just fine.
S

bendgate is not a serious problem,because the bending was caused by human attitude,the phone wasnt bent itself,you know i dont even sit on my 5s i know it would crack.
You must log in or register to reply here.
Share:
Facebook Twitter Reddit Email Share Link
Register on MacRumors! This sidebar will go away, and you'll see fewer ads.
Sign Up
Top Bottom