SIM NOT VALID - can this be fixed?

1. Bought an iPhone on Swappa. 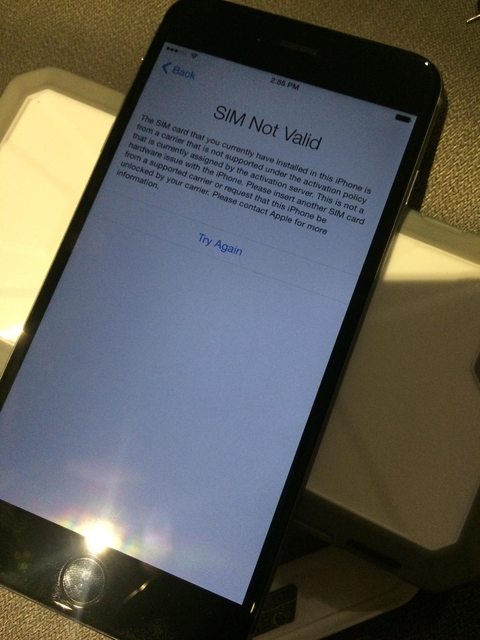 3. Seller will take iPhone back but what a headache and time wasted.

It doesn't appear to be locked but it could be a bad SIM card. Have you tried to remove the SIM and install a SIM from a different provider? Also if you continue with the problem, If the phone is still under warranty take it back to Apple to see if they will replace it.
B

Oh I had no idea it may be that simple.
Never had this issue before.
I should definitely try a different SIM.
May I ask - how do you realize it is not locked?
Thank you!!!

If the phone was locked, you would have received a different screen that stated "Activate iPhone-This iPhone is currently linked to an Apple ID----".
B

I think perhaps what you mean is associated with an existing iCloud account. But this is different than Carrier-Locked. No?

This could be locked to a different carrier than the SIM you are installing. Did this seller advertise as unlocked or on the same network? If so, then that is not the case.
B

He advertised as UNLOCKED but perhaps he was not telling the truth.

I almost bought a used 5s with this problem in the UK.
Seller was adamant it was unlocked, but after trying o2, three, and EE sims with no luck, she put her vodaphone sim in and it worked.

She had already phoned Apple, who confirmed that the phone was unlocked.
I suggested she return it an Apple store for them to check it out, but she just sold it as locked to Vodaphone.
I think this is an old problem, looking at some other forums.
You must log in or register to reply here.
Share:
Facebook Twitter Reddit Email Share Link
Register on MacRumors! This sidebar will go away, and you'll see fewer ads.
Sign Up
Top Bottom