Apple's virtual assistant Siri is known for offering up funny responses to a range of questions, and Apple's Siri team often puts time and effort into providing Siri with answers and comments on current events. This summer, augmented reality game Pokémon Go has become a worldwide phenomenon, and as discovered on Reddit and by 9to5Mac, Siri will now answer questions about the hit game.

A question like "Siri, what's your favorite Pokémon?" receives answers like "That yellow species with an electrostatic tail of variable lengths is rather cute" or "Polymaths prefer Poliwags." Asking Siri if it likes Pokémon Go also results in humorous answers like "I like pocket monsters. Pocket assistants, too." 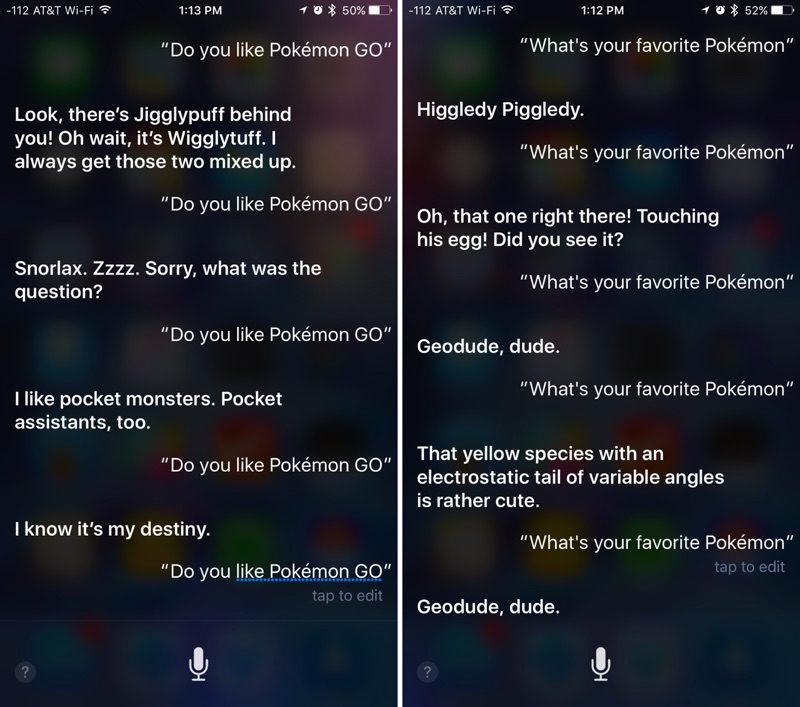 Because Siri draws in information from sources like Wolfram Alpha, which has offered information about Pokémon since 2013, the personal assistant can also answer specific questions you ask about Pokémon. Data available includes Pokémon type, abilities, stats, evolutions, and more specific comparative questions about which Pokémon have the highest attack, fastest speed, and more. 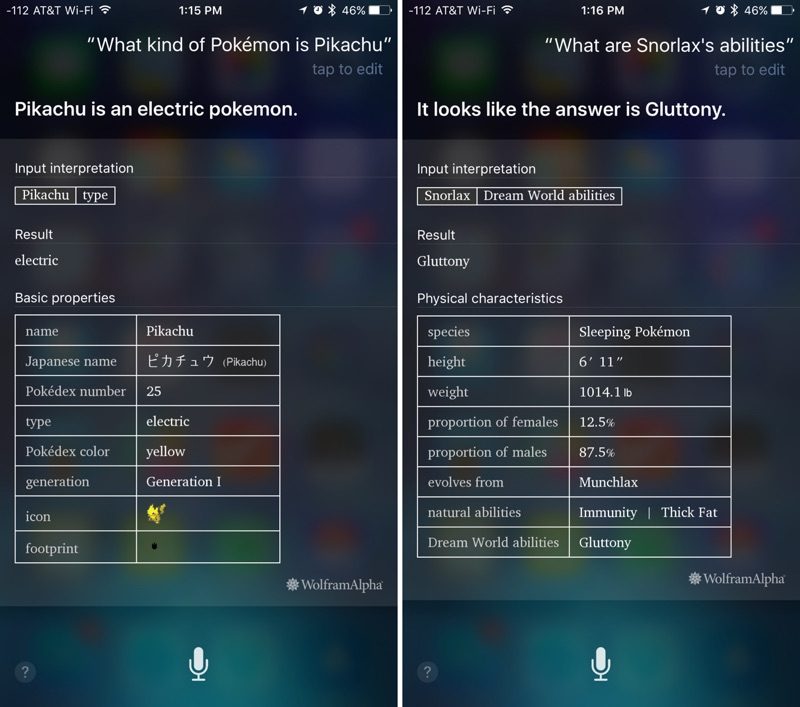 While fervor over Pokémon Go has died down somewhat in recent days due to controversial feature changes and decisions made by Niantic Labs, Pokémon Go set an App Store record for the most ever downloads during its first week of availability.

It is considered the biggest mobile game in U.S. history and has been downloaded more than 100 million times. According to estimates, the game brings in more than $10 million in daily revenue across the iOS and Google Play app stores.

To find other questions Siri gives funny answers to, Siri.io, a new website that offers a comprehensive list of Siri commands is worth checking out.

Before anyone asks, yes, it is a slow day!
Reactions: teeoh717, continuity, freezelighter and 88 others

Siri is a parrot and not much more.......
Reactions: continuity, attila, brentonbrenton and 8 others

"Touching his egg"
– See what you did there ( ͡° ͜ʖ ͡°)
Reactions: continuity, appledefenceforce, Dopestar and 8 others

Would be great to see some of that effort put into making Siri useful.
Reactions: twochoicestom, continuity, eji and 38 others

That's pretty much all it does in general
Reactions: continuity, eji, iCloudStrife and 35 others
H

I know it's my destiny
Pokemon, oh, you're my best friend!
In a world we must defend,
Pokemon, gotta catch 'em all!
A heart so true,
Our courage will pull us through...

This is what they spend their time programming? Seriously?

I can imagine their meetings:

Hey guys, you know what's a great idea? There's this pokemon phenomenon going on, we should capitalize on it!

Cool! Okay, Johnson get on it, should be done in like 30 minutes right?

It's nice to see Apple take a break from designing new watch bands and have a little fun.
Reactions: jadAce, continuity, MecPro and 22 others

Siri is like a box of chocolates......you never know what you'll get and most of the time nothing.....
Reactions: jadAce, continuity, iamPro and 9 others
R

Can't innovate my ass!! Siri can piggyback off anything that is ....innovating

Siri + Samsung = marriage made in heaven
A

Crosscreek said:
Siri is like a box of chocolates......you never know what you'll get and most of the time nothing.....
Click to expand...

You were excited to get it and thought it was so cool, only to realize he only had a few clubs, most of which are broken.
Reactions: continuity, otternonsense, autrefois and 2 others

Looks like they're keeping their interns busy.
Reactions: MrNikeFresh808 and LeadingHeat
N

Even in its current version on IOS 10 beta, it is not much better. This is why I have google for the serious questions I need to get. I asked Siri when Michael Phelps swims again and it asked Which team, the clippers or sonics. No excuse for it being this bad this long. It is embarrassing. Googles search just eats its lunch.
Reactions: iamPro, g-7, Idgit and 6 others

Siri is stuck where it started! Seems like an abandoned kid from Apple.
Reactions: g-7 and Iiiirvin

Would be nice to see Suri as remotely useful as Cortana or have the speech recognition capabilities of Google. Instead they waste time programming corny jokes that are funny about 3 times to a 13 year old.
Reactions: continuity, TimSHB, Iiiirvin and 1 other person
N

Asking Siri random **** is a bit too cringe at this point...
Reactions: Iiiirvin
R

Siri in her current state.. is pretty much useles.
Reactions: continuity, iamPro, Idgit and 6 others

precogincog said:
Would be great to see some of that effort put into making Siri useful.
Click to expand...

mantan said:
Would be nice to see Suri as remotely useful as Cortana or have the speech recognition capabilities of Google. Instead they waste time programming corny jokes that are funny about 3 times to a 13 year old.
Click to expand...

Or Siri?
Reactions: mantan, Shirasaki, Iiiirvin and 1 other person

I just saw this article, on my iPad.
I figured I'd play along.
I asked Siri, "what's your favorite Pokémon?"
My iPad rebooted.
I fear Siri may not have her heart in this one.
Reactions: NightFox, haruhiko, strategicthinke and 1 other person
You must log in or register to reply here.
Share:
Facebook Twitter Reddit Email Link
Register on MacRumors! This sidebar will go away, and you'll see fewer ads.
Sign Up
Top Bottom