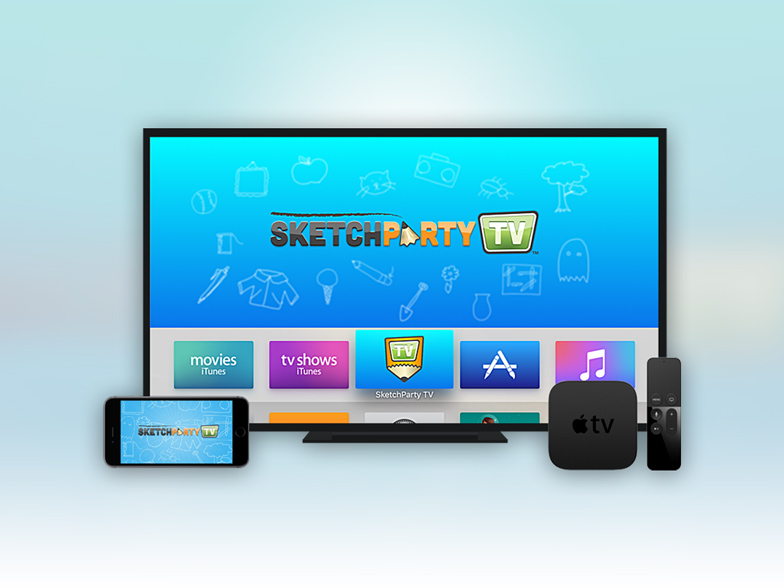 I’m very happy to announce the availability of SketchParty TV on the App Store for the new Apple TV.

SketchParty TV is the fun, family-friendly party game for the Apple TV, originally released in 2012. It brings a high-tech Pictionary-style game to iPad and iPhone owner’s HDTVs through the magic of AirPlay. Now it’s gone native to the Apple TV, enabling sharper graphics, better sound quality, and more fluid animation.

The iOS app has been revamped and pairs simply with the Apple TV app over a Wi-Fi network. AirPlay Mirroring is also still supported, along with cabled HDMI adapters and third-party AirPlay apps like Reflector.

Great for parties, family gatherings, and events, SketchParty TV offers hours of replay with a standard word list of more than 1000 words. With the Custom Word List editor it’s also an exciting addition to the classroom, and is recommend by Tony Vincent, world-renowned educational technology consultant and teaching conference speaker.

- Fast, fluid drawing engine. Brush stroke size is determined by drawing speed. Move your finger slowly to get a fine line, and fast to get a thick line.

- Custom Word List editor, great for classrooms and adding your own words

You can find SketchParty TV on the Apple TV App Store via Search, or you can purchase it on your iOS device here ( https://itunes.apple.com/us/app/sketchparty-tv/id500175028?mt=8 ) and then find it in your Purchased history on the Apple TV.

More info about the game is available at http://SketchParty.tv

The first three promo codes have been claimed. I have a few left, so here are three more promo codes for SketchParty TV:

To anyone that missed the promo codes - there's also a free edition, SketchParty TV Free, available here: http://sketchparty.tv/free/ - it has a limited number of word lists, but it's still just as fun as the paid edition. If you just want to try it out, I'd recommend taking a look at that.
Comment

A quick question. Drawing slowly for a thin line and quickly for a thick line. Was this a typo as this goes against every drawing app out there which reverse this behaviour. I would have just thought it more logical for a quick line to be thin and vice versa?
Reactions: DoctorFedora
Comment

Donka said:
A quick question. Drawing slowly for a thin line and quickly for a thick line. Was this a typo as this goes against every drawing app out there which reverse this behaviour. I would have just thought it more logical for a quick line to be thin and vice versa?
Click to expand...

A good question, but it's not a typo. With real world tools, you'd apply more pressure or rotate a brush to get thicker lines, like you would with an iPad Pro - but I needed this to work with the majority of iOS devices. So when drawing deliberately and slowly, the player is drawing more precisely, and thus drawing with a thinner line. Moving quickly will lay down more color at once (e.g. - move your finger or stylus rapidly over the screen to fill in a larger area more quickly).

But please, give it a try and let me know what you think of how it works. I hope you'll find it intuitive.
Reactions: Donka
Comment

Thanks for the reply. I'll give the free app a spin and feedback. Is that available for the ATV?
Comment

Donka said:
Thanks for the reply. I'll give the free app a spin and feedback. Is that available for the ATV?
Click to expand...

Donka said:
Thanks. Will check it out tomorrow.
Click to expand...

Thank you, I hope you enjoy it! It's a lot of fun.
Comment
Z