A sketchy new report [PDF] from analysts at KDB Daewoo Securities Research shared by OLED-Display.net (via BGR) claims to have full details on Apple's iPhone 6, but there are several issues with the claims that call the entire report into question.

According to the report, the iPhone 6 will be available in two sizes, one with a 4.7-4.8 inch display and a second at 5.5 inches. These displays are said to run at 1920x1080 (440 ppi) and 2272x1280 (510 ppi) respectively, using indium gallium zinc oxide (IGZO) technology rather than the low-temperature polysilicon (LTPS) technology used in current iPhones. 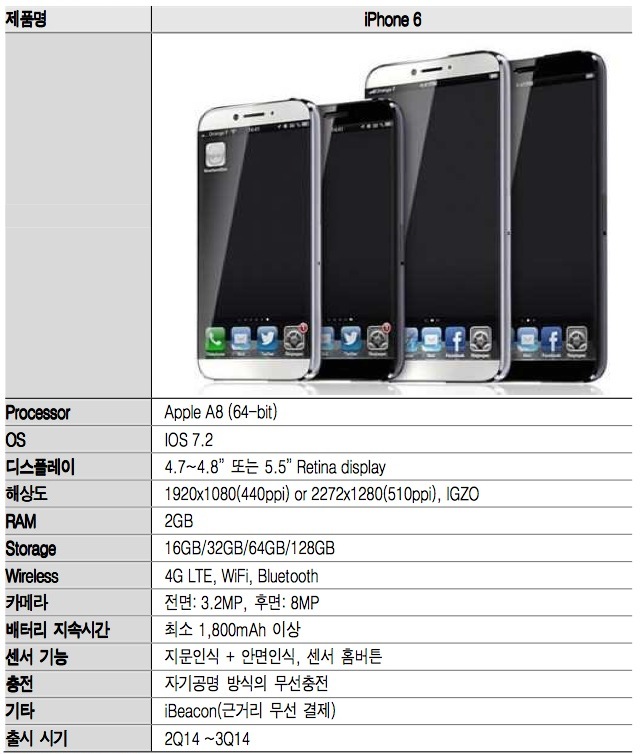 While the claimed display sizes are in line with circulating rumors, the claim of IGZO over LTPS raises some doubt given that LTPS offers better electron mobility and thus greater efficiency than IGZO. IGZO is starting to gain popularity in larger devices such as tablets due to technical limitations with creating LTPS displays at those sizes, but LTPS remains the preferred technology for many high-end smartphones. Still, it is possible that larger displays at higher pixel density for the iPhone 6 could spur Apple to change its display technology.

Other claims in the report include a bump in RAM to 2 GB alongside a new A8 chip, a new 128 GB storage option at the high end, and an upgraded 3.2-megapixel front camera. In line with a previous claim, the analysts predict that the rear camera will remain at 8 megapixels, although it could gain other improvements.

Finally, the report gives a fairly wide launch window of the second or third quarter of this year. iPhone launches have come at the tail end of the third quarter or even early in the fourth quarter over the past several years, with repeated rumors of Apple possibly returning to the mid-year launch window used for early models failing to come to fruition.

Debunked: has no Touch ID.

nonsense. looks like a samsung, hungover much macrumors?
C

these analysts will do anything for attention

No way this happens. "Sketchy Report" says it all.

I'm hoping that if the iPhone 6 releases in two sizes, one of them is the current 4" size. I don't want an iPad Mini that places phone calls.
C

I love how it's running iOS 6. Seems legit.

Apple really needs to knock of the 16gb base model stuff this year. 32gb please.

Guess the next step forward in display technology would be LTPS with quantum dots...

(for everyone who is not that into display technologies: IGZOs main advantage is, that it's cheaper to produce large displays [large like ipad, notebook and larger] than LTPS, which has twice the electron mobility.)
Last edited: Feb 3, 2014
M

cymerc said:
I love how it's running iOS 6. Seems legit.

They aren't saying the image is of the new iPhone... They are using that as an example placeholder. I think these specs seem legit.. Maybe not the IGZO part though.
S

Is this a report by Mr. Kuo? No? Then move along. Nothing to see here.

It almost looks like they've taken a Htc and put iOS6 skin on it.
They could've at least added a home button/Touch Id to it
L

cymerc said:
I love how it's running iOS 6. Seems legit.
Click to expand...

Analysts are getting really lazy with their photoshopping these days.

ethanlee said:
Debunked: has no Touch ID.
Click to expand...

cymerc said:
I love how it's running iOS 6. Seems legit.
Click to expand...

Well, they never said that was a picture of the new phone... someone probably just threw something together real quick for the clickbait. Err, I mean, for the report.

I'm in the "I'll believe it when I see it" crowd, but I wouldn't mind a slightly larger screen.
L

What would be the point of a 500ppi display?

An 1080p screen would be very welcome on iPhone, regardless of the screen size.

There's no reason to list iBeacon. iBeacon is a function of the app API and the beacon that is installed somewhere. There is no specific hardware that would be tickmarked in the device other than BT4.0LE, which has been present since the iPhone 4S.

Stick around 326ppi and save on battery usage.

A PPI way beyond what you can even see achieves three things:

- Slows down the GPU

- Makes a nice bullet marketing bullet point for people who care about spec numbers over actual usefulness (tech reviewers often fall into that trap--and it drives them crazy that Apple users keep on choosing real features that work well, over marketing fluff like spec numbers)
E

monaarts said:
They aren't saying the image is of the new iPhone... They are using that as an example placeholder. I think these specs seem legit.. Maybe not the IGZO part though.
Click to expand...

Or the iOS7.2 bit, each new phone gets a new version so it would be 8.0, this crap isn't even plausible, at all.

ethanlee said:
Debunked: has no Touch ID.
Click to expand...

The entire surface of the phone will be a Touch ID sensor. The phone will know it is you as soon as you pick it up.
You must log in or register to reply here.
Share:
Facebook Twitter Reddit Email Share Link
Register on MacRumors! This sidebar will go away, and you'll see fewer ads.
Sign Up
Top Bottom