The real time messaging and file sharing platform has become a favorite among professionals for its one-to-one and group conversation tools, and the addition of voice calls comes after months of beta testing by the startup.

The update means all users can make one-on-one calls, but only paying teams can make use of the group call option in channels and group messages.

Slack users should see a phone icon in the channel header when using the desktop app or running the service through Google Chrome browser. A "Start Call" option also now appears in the iOS app's dropdown menu.

Also accompanying the new voice call feature is an emoji response tool, allowing users to make characters appear under their profile photo for the duration of the call. The idea is for listeners to be able to 'comment' on the subject being relayed to them without interrupting the speaker. 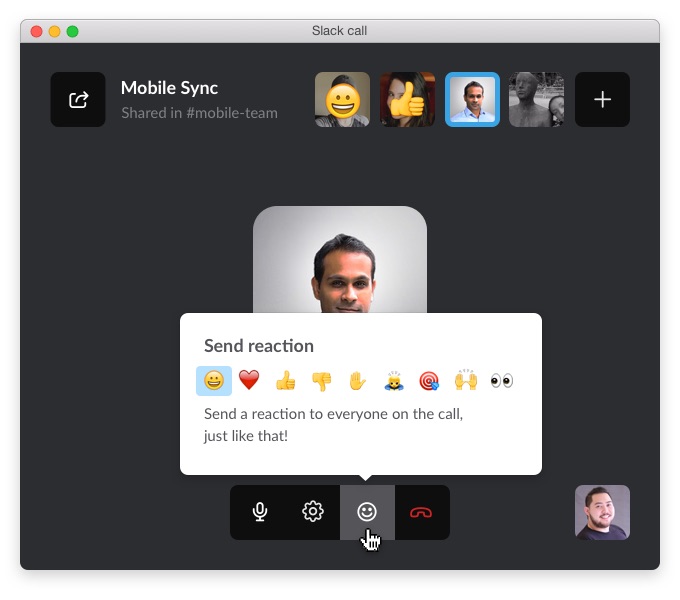 Slack announced its intention to introduce voice calling to its text-based chat platform back in March, signaling the company's advance into traditionally Skype-dominated territory and its ambition to become the go-to tool for all team-based communications.

Slack is a free download for Mac on the Mac App Store and available for iPhone and iPad on the App Store.

Will have to give that a go, better than the Google or Skype plugins I expect. We use Slack heavily in our company division, lots of integrations etc.

We've been using voice calls on Slack for about a month or two now. It's amazing.
Reactions: pbush25

I thought this came out back in April? I remember using it the first day it came out and it was okay. The sound was a bit "tunnely" but I started noticing that the quality continued to improve. It's actually pretty good now.

Used it this morning, works well. Yes it came out before, but I think in "beta" only, had tried it before and it worked fine, but forgot about it and it is now easily in the app as a single click operation

Now if they would just add video calling...

brownbird said:
Now if they would just add video calling...
Click to expand...

Right now you can use Skype plugin or Google Hangouts plugin, but yes, video call and screen/virtual whiteboard sharing would be really nice.

kryten42 said:
Right now you can use Skype plugin or Google Hangouts plugin, but yes, video call and screen/virtual whiteboard sharing would be really nice.
Click to expand...

We use appear.in which is great, but a video service native to the app would really be killer. Whiteboard would be amazing. What recs do you have for virtual whiteboarding?

brownbird said:
We use appear.in which is great, but a video service native to the app would really be killer. Whiteboard would be amazing. What recs do you have for virtual whiteboarding?
Click to expand...

Yes, I'd be curious to see what people are using for whiteboarding inside of or from Slack.

Skype is fine for home users etc but Skype for business (which is just Lync re-branded) is woeful. Most of our clients have now moved to hosted VoIP with most of them utilising the broadworks platform.

spiggott said:
Yes, I'd be curious to see what people are using for whiteboarding inside of or from Slack.
Click to expand...

Nothing inside Slack right now (which is why I would love one adding). Have used it in WebEx before, but really not as useful as it could be. I would love one that would integrate nicely to slack, especially if it works on the iOS (iPad) so I can use a stylus/pen to draw on it.

The team I manage are based all over the world so this would be a killer feature for us, especially as we work on some upcoming major projects.
You must log in or register to reply here.
Share:
Facebook Twitter Reddit Email Share Link
Register on MacRumors! This sidebar will go away, and you'll see fewer ads.
Sign Up
Top Bottom