HI have a 2011 27" iMac which I'm attempting to make run faster by using an external SSD boot drive (La Cie little big drive). Installation went smoothly using CCC. When I tested speed using Black magic I don't seem to get any higher than 90 MBps read 85 Mbps Write. I know it should be much faster than that. Any suggestions? This is connected via Thunderbolt. Please let me know any other info you may need to help rectify this. Thanks much everyone!
Last edited: Jun 23, 2015

Stupid question but ... are you sure you have the external selected for benchmarking?

Ha! I do. And it runs just as slow as my internal HD. Or seems that way. Not in any way "snappy" like my macbook air

You don't mention which size of Thunderbolt LaCie Little Big Disk you have, but I have a couple of them and did some measurements awhile ago. Shown is the test on a 2TB (dual 1TB hard disks in RAID-0 as received), and a test after replacing the hard disks with a pair of SSDs in RAID-0. These were probably tested on a 2012 iMac 27" at that time. Another LBD came with 1TB using a pair of 500GB in RAID-0 and tested somewhat slower at 154/153. 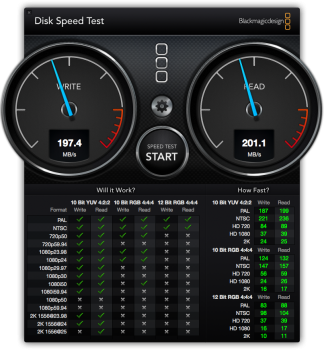 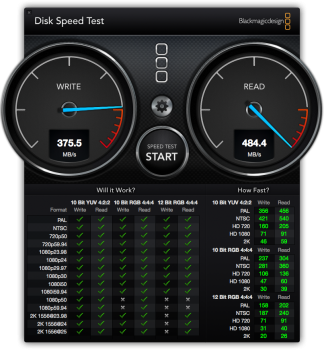 Sorry. I believe it's the 1 TB external w/dual 500 Gig SSD's in an enclosure that connects w/Thunderbolt

Maybe their SSDs are garbage. That seems very slow.
L

Well to give you some comparison I installed (albeit internally) an SSD alongside the existing HDD a couple of weeks ago - mid-2011 21.5" iMac (daughters machine). These are the results - SSD is Samsung Evo 850 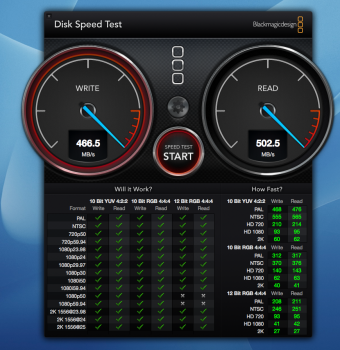 Those are speeds closer to that of of spinning hard drives. Does Disk Utility or "About This Mac" > Reports > show that the LaCie has actual SSDs in it? Older Little Big Drives were sold with the spinning disks.

Macthefork. you may be right. Here's what About this mac shows: 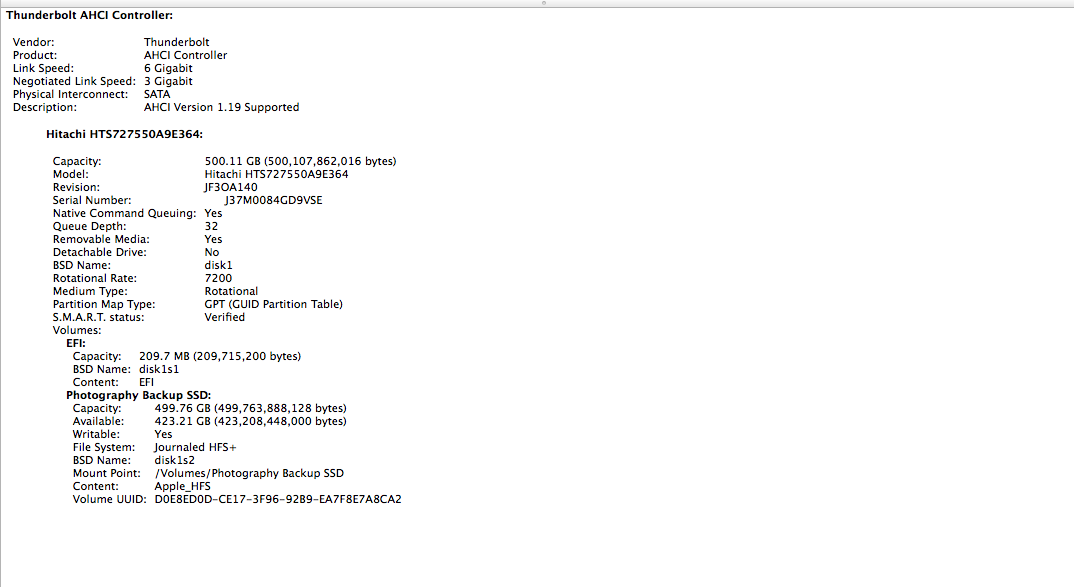 Ahh. Called Lacie (GREAT customer service btw). Gave them my serial #. Turns out this particular external is in fact a rotational drive vs. SSD (bought from a friend, so always assumed all LaCie were SSD. Thus the slow read/write times. I'll reformat this and keep as a storage device and start looking into adding internal SSD to the iMac. Thanks everyone.

Yes ... those are rotational hard drives, although they are 7200rpm Hitachi HST drives which should be good. Do you by chance have them configured as RAID-1 (mirrored)? That will give you only the rated 500GB total storage at the single disk transfer speed, but with full redundancy. If you configure them as RAID-0, they will give you a total disk capacity of 1TB (2 x 500GB), and will transfer data roughly twice as fast. However if a disk fails, all data is lost so do keep a backup (which should be done anyway).

Note: the RAID-1 does provide for disk failure, but it is not a "backup" either since a failure of the enclosure could destroy both disks at once, and altering a file either intentionally or accidentally is instantly duplicated to the other disk with no chance of undoing it. RAID-1 mirroring is really for 100% full-time data availability for critical needs that can't tolerate any downtime.
Reactions: miles28
L

miles28 said:
Ahh. Called Lacie (GREAT customer service btw). Gave them my serial #. Turns out this particular external is in fact a rotational drive vs. SSD (bought from a friend, so always assumed all LaCie were SSD. Thus the slow read/write times. I'll reformat this and keep as a storage device and start looking into adding internal SSD to the iMac. Thanks everyone.
Click to expand...

If you are going to internally fit an SSD in addition to existing HDD as I have done then tip - watch the instructional videos a couple of times and have them to hand when you do the job. Get the proper tools for the job including a good set of long nosed tweezers (invaluable) and keep a steady nerve.

Now I have done my daughters I am going to do my own (exact same model i.e. 21.5 inch mid-2011). Having done the one I will feel more confident second time around. I am going to use another Samsung Evo 850 500 gig model.
Reactions: miles28

Glad you figured it out.
Reactions: miles28

Yes you can! The only caveat being whether it is the early 2009 or the late 2009. With the late 2009 you will need the temp sensor if you are simply going to swap out the old HDD for the SSD.

If however you are going to add the SSD and keep the existing HDD in situ as I have done, then you won't need the temp sensor either way. There are a couple of ways to add the SSD so try Googling - plenty info out there.
You must log in or register to reply here.
Share:
Facebook Twitter Reddit Email Share Link
Register on MacRumors! This sidebar will go away, and you'll see fewer ads.
Sign Up
Top Bottom