Does anybody know where i can get a really really small apple logo sticker so i can put it on a remote? THANKS

sap12690 said:
Does anybody know where i can get a really really small apple logo sticker so i can put it on a remote? THANKS
Click to expand...

Lots of Apple products come with a pair of stickers, smaller items come with smaller stickers. Not sure how small you need.
Comment
P

Your best bet will be to trace an apple logo off your computer screen and transfer it to a small sticker and then cut it out. If you are looking for it to go on a remote, you are probably looking for a smaller one than what comes with the iPhone.
Comment
S

i need to be the size of about this "

Why do you want/need an Apple logo this small on your remote anyway?
Comment
C

Jason S. said:
Why do you want/need an Apple logo this small on your remote anyway?
Click to expand...

HELLO!!! Why WOULDN'T he want a sticker on his remote!!! LOL!!! I have apple stickers all over everything. On all of our cars (in rear window), our front screen door, front window, covering the logos on my two monitors at work where I am forced to use PC's, on both of my HP towers at work, my HP printer at work, and I made an apple magnet (put a sticker on an old magnet and cut around the sticker) to put in the doorway of my cubie at work. I recently had to turn off the data plan on my iPhone for financial reasons, and I've started using a cheesy flip phone, so I am also needing to find a small sticker that I can put on my flip phone to cover the at&t logo on the front. I'll probably have to make my own. I even had an apple logo shaped birthday cake made for my husband this year. THAT was totally AWESOME!!! (Yeah, I know, it's a sickness. Probably some kind of technical name like apple-itis, or something.)
Comment
A

the smallest real legit apple sticker made by apple, i have ever seen was the make your own one.
its 1" by 1 1/8" inch. in the picture it looks crude because i put tape over to seal it so it lasts longer.
without tape, the ink will fade and rub off

its an apple,
its a sticker,
its made by apple

apple gives away an apple sticker kit to retailers ( aka anybody ) for use on counters / windows to tell people the establishment accepts apple pay, and i got one, and i cut it out and i put it on my dog, so people would know he is a cool dog, from a distance 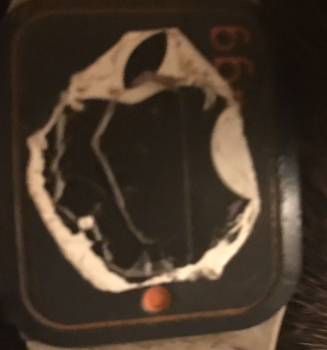