Sphero's been making iPhone-connected ball-shaped robotic toys since 2011, and while the company has been successful with the original Sphero and the Ollie, it stumbled on a major hit this year with the launch of the BB-8, a Star Wars branded iPhone-controlled droid.


BB-8 is based on the droid from the upcoming movie Star Wars: The Force Awakens. It combines Sphero's existing robotic ball technology with the Star Wars universe, a marriage that's resulted in the most appealing, advanced Sphero toy to date.

Sphero's BB-8 has a fun backstory and was designed with help from Lucasfilm. Throughout the development process, Lucasfilm provided Sphero with details on BB-8, feedback on the design, and the iconic sounds that bring the toy's personality to life.


The "real" BB-8 can be seen in the Star Wars: The Force Awakens trailer​
Hardware and Design

Design wise, the BB-8 consists of a robotic ball, similar to the original Sphero, and a droid head that fits onto the ball using magnets. Under the head, there are a set of wheels that allow it to move around and stay in place on top of the body of the BB-8 while it is in motion. 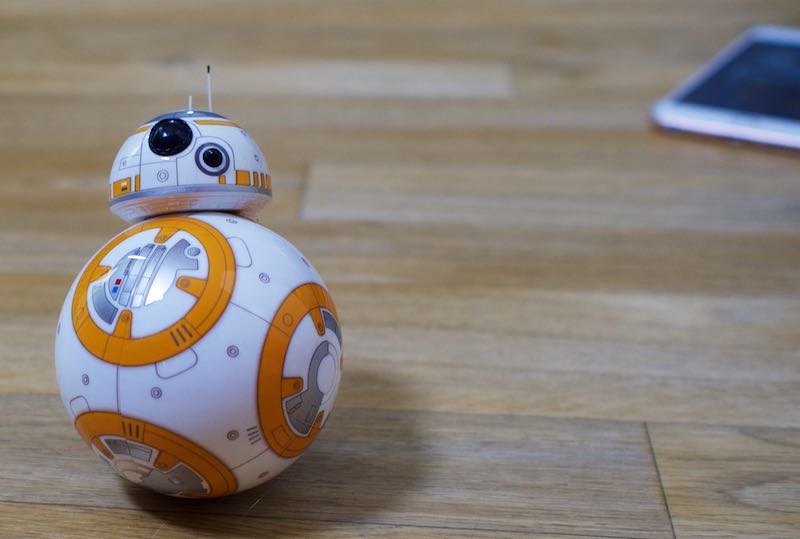 BB-8 is about the size of a baseball and fits in the palm of a hand. If you have a Sphero already, the body of the BB-8 is the same size as the Sphero ball. The head is about the size of half a ping pong ball and is adorned with two ornamental antennae. The body and the head are both made of a smooth plastic and there are LEDs inside that allow BB-8 to light up. This is a pretty durable plastic - even when BB-8 slammed into walls, it remained undamaged. Plastic is breakable though, and it's still worth being gentle with BB-8.

Hopefully they update it to be programmable like the normal Sphero, but I'd guess the limitations are part of the Star Wars agreement. It is sad, because it really limits what it can do. It is fun, but the review is right, it kind of loses its luster after a few weeks and is more likely to just sit in its dock on a shelf. It might be better if it connected more quickly, but between the long start up screen sequence and then time it takes to connect, it really feels like an effort to just get it going.
Reactions: tk421

Gonna have to pass.

Too small for the price. $250 for one the size of a basketball would be better.
Reactions: Digital Skunk and Sasparilla

Shut up and take my money..
Reactions: rhett7660, Oblivious.Robot and tk421
S

I'm sorry, but for $150, that is not a must have. Plus what if this droid turns out to be super annoying like Jar Jar Binks.
Reactions: knemonic
D

ghostface147 said:
Too small for the price. $250 for one the size of a basketball would be better.
Click to expand...

Ask and ye shall receive:

Reviews of Hasbro's version haven't been nearly as good, though. It doesn't move very well. But it's about half the price of the Sphero.


Supposedly, Sphero was involved in the creation of the movie prop.

Glad I haven't seen one of these at the Apple store. BB is adorable, but not to the tune of $150 especially when he keeps losing his head.

Anyways, way overpriced, will wait until it goes on a firesale. $150 can get you much better tech toys these days.


ghostface147 said:
Too small for the price. $250 for one the size of a basketball would be better.
Click to expand...

There is a Basketball one that is like $80, but is very low on tech and movement is not really like the droid. There ar many at different price ranges w sizes and movement.
Last edited by a moderator: Oct 21, 2015
F

Just an overpriced Sphero with plastic head and StarWars brand.
But marketing does the rest, of course.
E

I love Star Wars (the original trilogy) and was really excited when I heard about this...but when you actually READ all the not-so-great reviews (on multiple websites) and basically misleading advertising (the videos...especially the unit has 0 sound emanating from it), it's not worth $150 and probably not worth $100. I am hoping a 2.0 release comes out next summer where the device actually lives up to its advertisements.

This is one of those things you play around with for 30 minutes at best after unpacking, and then ask yourself why you were such an idiot spending € 160 on it. You spend the next 30 minutes trying to return it and get your money back.
You must log in or register to reply here.
Share:
Facebook Twitter Reddit Email Share Link
Register on MacRumors! This sidebar will go away, and you'll see fewer ads.
Sign Up
Top Bottom