Spotify today released a new version of its iOS app [Direct Link] that adds Apple CarPlay integration. Spotify was among several iOS apps, including CBS Radio, iHeartRadio and Beats Music, that pledged support for the in-car iOS feature when it was unveiled earlier this year, and Spotify's update arrives just as Pioneer is rolling out CarPlay firmware support for several existing aftermarket systems. 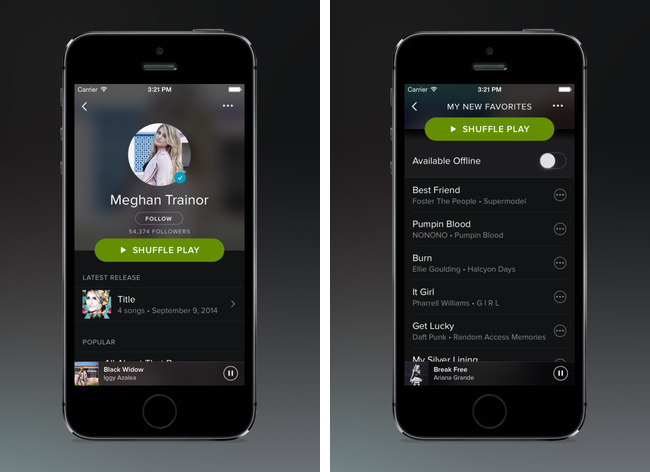 The updated music player will allow users to access their Spotify account using the car's in-dash receiver and a compatible iPhone. Other changes in version 1.8.0 include support for spoken Swedish and Québécois on iOS 8 and other various iOS 8 bug fixes.

Apple's CarPlay technology brings iOS features such as navigation, messaging, music playback and more to car dashboards, making it easier for users to interact with those services while in the vehicle. Several automobile manufacturers, including Audi, Ferrari, Ford, Hyundai, and others, have partnered with Apple to bring the technology to their cars in upcoming model years.

If only Honda would get rolling on Carplay support...
I

If my shipping estimate is correct, then it doesn't impact me for another 6 weeks... and if I have to wait 6 weeks. Given how long my wait time is, I'm thinking Spotify isn't concerned yet because the iPhone 6 hasn't hit critical mass for them yet.

ArtOfWarfare said:
I'm thinking Spotify isn't concerned yet because the iPhone 6 hasn't hit critical mass for them yet.
Click to expand...

You know, because Apple has only sold more than 10 million phones. I'm waiting for spotify to support landscape mode. Is that too much to ask?! And I want iPhones 6/6+ support on most apps.

JawnVawka said:
You know, because Apple has only sold more than 10 million phones. I'm waiting for spotify to support landscape mode. Is that too much to ask?! And I want iPhones 6/6+ support on most apps.
Click to expand...

Jeez... the Apple Store app just got updated yesterday... and the KNEW about the iPhone 6. Give these guys time.
C

People seem to not be remembering how long it took apps to support the iPhone 5 screen resolution...

JawnVawka said:
You know, because Apple has only sold more than 10 million phones.
Click to expand...

First off, I don't think sold is the same as delivered. Apple sold me an iPhone 6 and an iPhone 6+, but neither has been delivered yet (6 should arrive sometime next week, 6+ in mid November). Spotify isn't concerned about that. Furthermore, Apple sold over 160 M iPhones in the 12 months prior to the iPhone 6 going on sale, which means at most, only 6% of iPhone users have an iPhone 6 or 6+ so far. I expect the actual number to be considerably lower, since I know people sticking with the iPhone 5 or 4S, which means the total number of iPhones to consider is over 160 M (they sold ~300 M iPhones in the past 24 months.)

Factor in the number of people who have had their iPhone 6/6+ delivered... I don't know the actual numbers, but personally, about half the people I know who ordered one have received it so far. So I'd say the real number is somewhere around 1% of all iPhone users are iPhone 6 or 6+ users right now. Not worth supporting, yet, in the eyes of most developers. Wait for it to be 20-50% of users for it to get supported.

If you can't remember, Spotify took months after iOS 7 released to update their app and for full support on the iPhone 5s.

They are slow with updates and they will with this too I bet. All tho I could be wrong and they have a update in their pockets that will soon release but from past experience, I sort of doubt it.
E

At the very least, they should add landscape support. They already have it on Android devices, and their excuse for not having it for ios was that the screens were too small.

Menel said:
Jeez... the Apple Store app just got updated yesterday... and the KNEW about the iPhone 6. Give these guys time.
Click to expand...

There were people on Earth that didn't know about iPhone 6 before it was announced?????

I don't have enough data to attempt to stream music in my car. I would love to though!
X

If only Spotify focused on improving/fixing issues with BMW's iDrive system.

None of the apps I have (bar Facebook Messenger and Apple Store app) have been updated to support iPhone 6.

As of Septemer 30th, only 2.6% of iPhones in use were the iPhone 6 or 6+. So it's not worth worrying about yet. But the numbers are going up quickly, as quickly as Apple can make them, as shown by the shipping estimates not being within 24 hours, so I would expect it to top 5% by the 10th of October... Maybe around late November it'll hit 20% which is when most companies will begin supporting it.
P

Great! This will be awesome in all those cars have CarPlay!

All NONE of them.
D

I have CarPlay and it's awesome. Too bad the Spotify update for CarPlay has made it so unstable.
X

xizdun said:
If only Spotify focused on improving/fixing issues with BMW's iDrive system.
Click to expand...