Spotify is now testing its live lyrics feature in the United States, so some Spotify users will see an option to view lyrics synced to the music they're listening to on an iOS device. 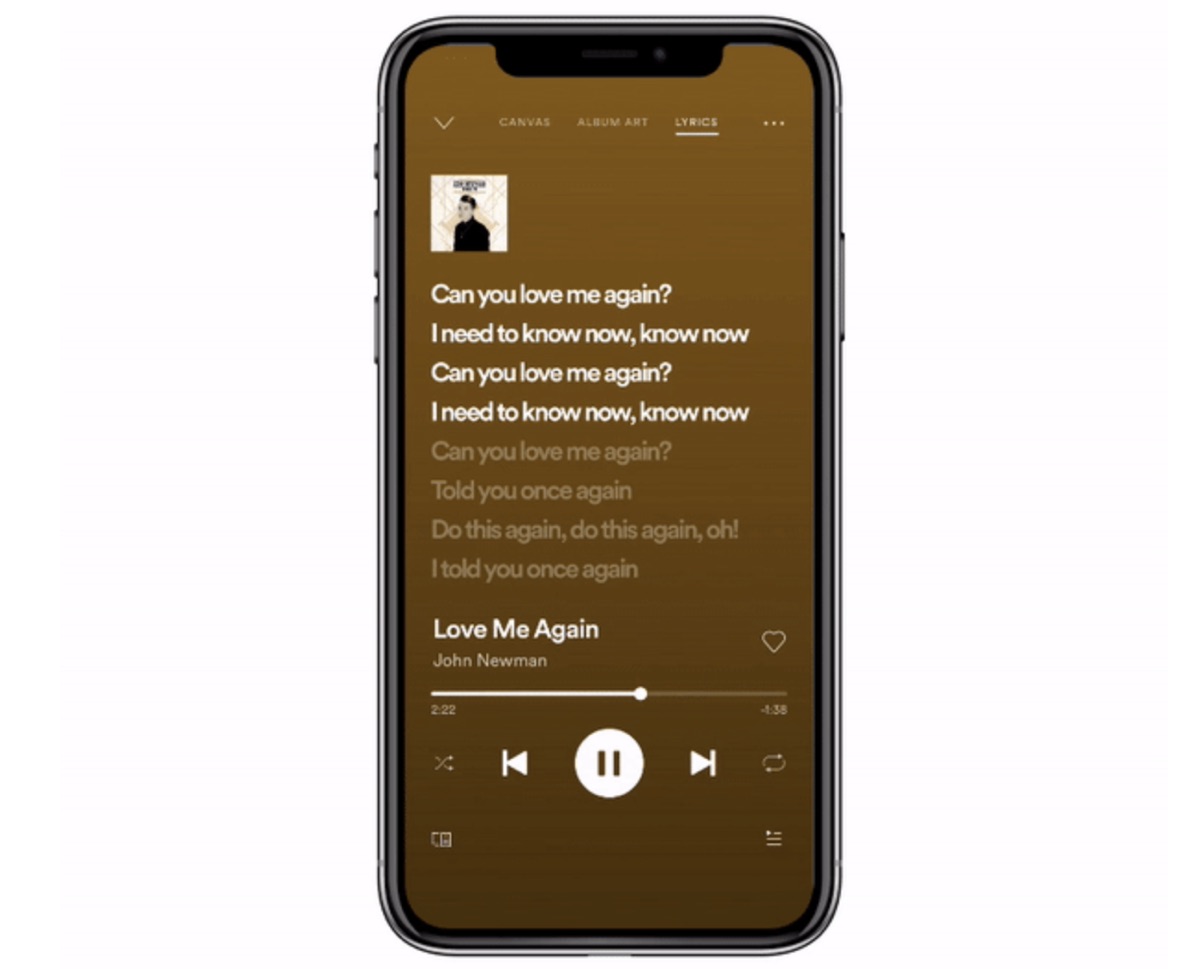 Live lyrics have already been tested and launched in other countries, and Spotify this morning confirmed to Engadget that the feature is available to some users in the United States.

"We can confirm we're currently testing our lyrics feature to a select number of users in the US. At Spotify, we routinely conduct a number of tests in an effort to improve our user experience. Some of those tests end up paving the way for our broader user experience and others serve only as an important learning. We don't have any further news to share at this time."
Click to expand...

Spotify's live lyrics feature won't show up for all Spotify users as the company is using A/B testing to determine demand for live lyrics in the U.S. If you have Spotify, you can check to see if live lyrics are enabled by choosing a song and then checking for the lyrics option in the playback controls.

Spotify's live lyrics option is powered by Musixmatch and has previously been launched in 26 markets around the world, including Brazil, Mexico, Hong Kong, Thailand, and India.

It's not yet clear if the live lyrics feature will fully launch in the U.S. because as Engadget points out, Spotify has tested it in markets like Canada and has then not followed through with the feature's release.

Major Spotify competitor Apple Music has a built-in live lyrics option that has been available since iOS 13. The lyrics in Apple Music scroll as a song plays, keeping time with the music, which is similar to how Spotify's live lyrics work.

LOL! Apple has notoriously taken ideas from the Spotify playbook for the last few years.
Reactions: michaelnugent, K!llSwitch, TheYayAreaLiving 🎗 and 3 others

Not copying, they had lyrics before back in 2014 but removed it after their agreement with Musixmatch lapsed. They initialized a new partnership and that's what this is.
Reactions: michaelnugent, ATC, TheDemogordon and 6 others

mcfrazieriv said:
LOL! Apple has notoriously taken ideas from the Spotify playbook for the last few years.
Click to expand...

KamranMackey said:
Not copying, they had lyrics before back in 2014 but removed it after their agreement with Musixmatch lapsed. They initialized a new partnership and that's what this is.
Click to expand...

Hmm, I thought Apple featured that feature first in Apple Music. But I do know Shazam introduced it first.
Reactions: beach bum
W

Spotify UI is so cluttered - song stories, Genius lyric cards, and now this? They need to just simplify things.
M

Apple copied Winamp because it can also play music and has playlists and album art. How far back do you want to go exactly?
Reactions: michaelnugent, Oblivious.Robot, CarpalMac and 1 other person

a music service offering lyrics is copying now? That’s like complaining about every pizza place having salami pizza
Reactions: TheDemogordon, Rob_2811, TheYayAreaLiving 🎗 and 1 other person

If that were the case you'd be able to use it on the homepod. ?
Reactions: TheYayAreaLiving 🎗
R

They probably thought it was fair after Apple Music copied their business
Reactions: FightTheFuture and TheYayAreaLiving 🎗
K

From the screenshot, it looks like there is finally a way to toggle between Canvas and album art. This ability existed for a hot second but was removed for some reason.

Lyrics will be a nice addition.

mdnz said:
Apple copied Winamp because it can also play music and has playlists and album art. How far back do you want to go exactly?
Click to expand...

About a decade prior to Winamp in 1980s there were Stereo SID Player for Commodore 64 by Mark Dickenson and Diversi-Tune for Apple IIgs by Bill Basham to name a few.

How does it work on Apple Watch? Oh wait, this is Spotify we’re talking about.
G

It doesn't really matter. I do find it curious that when Apple does something, there is always a competitor that comes up with the same type of feature shortly thereafter. As long as no laws are being broken, let the competition continue.
Reactions: AhRiHmAn

I hope theirs has more accurate lyrics.
Reactions: Paul_a

be a lot cooler if they made a Sonos widget
S

Whoever is copying who, I love the live lyrics feature on Apple Music. It's one of their best features.

I’m on the TestFlight beta and sadly don’t have the feature. I’m really hoping they’ll carry through and bring live lyrics to U.S. users, that’s been something I’ve envied of Apple Music ever since it was added.
S

Deezer had lyrics before Apple. ;/)

Long over due, I think. But better later to the party than never. Only for that feature many music enthusiast will use the app, including myself