Developer Square Enix recently launched a new game called Mobius Final Fantasy, which the company said is "custom-tailored for mobile platforms," and is now available on iPhone, iPad, and Android devices. Some of the team behind the game includes producer Yoshinori Kitase and writer Kazushige Nojima, who penned both Final Fantasy VII and Final Fantasy X. 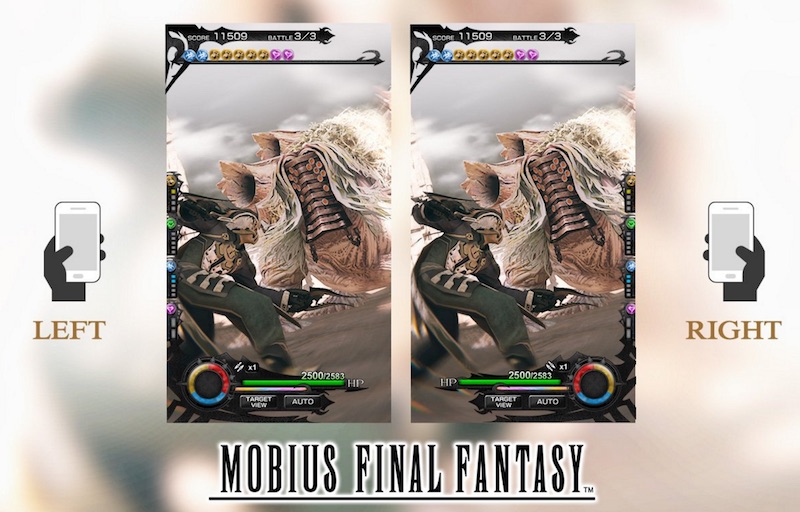 Like with most games in the series, Mobius Final Fantasy is an RPG with in-depth character customization options and a turn-based battle system "specifically designed for mobile devices." The company said that the game's character personalization options come from the "job system," a mechanic seen in previous Final Fantasy entries, which lets players specialize in a specific area of expertise to combo different classes with "specialized elemental abilities" and gain an advantage over enemies in battle.

According to Square Enix, the game will see upcoming releases debuted in "chapters," which will bring new in-game events, playable content, and avatar items, although it was left unclear if these will be locked behind a paywall. In its App Store page, the main source of in-app purchases centers around "Magicite," which is the game's version of in-world currency that lets users pay real money to get slightly ahead if their in-game monetary intake is drying up.


Unlike most titles from Square Enix on the App Store, like the recently released $8.99 Apple Watch game Cosmos Rings, Mobius Final Fantasy is a free-to-play entry in the series, so players interested can download the game and try it out without having to pay. In addition, anyone who starts up the game before August 31 will have a chance to gain special items related to past titles in the series, including Tidus's signature weapon from Final Fantasy X, and other various ability boosters and consumable tokens.

You can download Mobius Final Fantasy from the iOS App Store for free. [Direct Link]

Shoulda seen that one coming

Growing up I was a massive Final Fantasy nerd so you know... this hits right in my nostalgia zone. I think it's interesting and intelligent for Square-Enix to try and create compelling mobile apps... but this seems to be missing the mark for me.

The 'tutorial' is just a boring, hot mess. There are too many things they are trying to stuff down your throat right away instead of introducing these elements more organically throughout the gameplay. I found it somewhat overwhelming at times. The interface seems needlessly complex for a mobile game. There are innumerable tiny buttons and submenus that the user will need to navigate through in order to affect changes to the various cards / jobs / abilities / etc.

I'm going to check it out again today... but after that I don't know.

I think with their port of Final Fantasy Brave Exvius they hit a sweet spot for mobile + Final Fantasy. This? This seems like you're going to spend more time in the navigation than in the actual gameplay.
Reactions: tkukoc and Benjamin Frost

I miss the good 'ol days of demos. Ya know; the other way you could try a game for free before buying? But I get it, F2P had to come into play somehow for SE. They've been pushing $7-16 games on iOS already which is amazing compared to many other mobile games - though these have mostly (if not all) been ports, so adding F2P would have been more work and would have upset fans.

This is a new game so fans can't get mad at any change. But it's also sad to show that every developer that wants to be on mobile feels they MUST have a F2P title.

I'm more likely to pay a one-time in-app purchase to unlock the entire game. But that's not how these games are built and so they are not for me.

I do download and try these F2P games and they fail me 99% of the time. Which is upsetting because the developers don't see that as a negative thing. They got that download which helps they're trending which is all that matters because that results in more users which results in more $$. not hating the player, just hating the F2P game.
Reactions: Benjamin Frost

Sonic the Hedgehog fails to appear even once in the entire game 2/10
Reactions: Spendlove and iShater

I am too busy with CoC to try this.

As opposed to your game? Link please.

iShater said:
I am too busy with CoC to try this.
Click to expand...

Being that people (including me) don't know what CoC means...

It looks like your too busy with cock. Which is fine, but makes me wonder... Why post that in this forum?

marty1980 said:
Being that people (including me) don't know what CoC means...

It looks like your too busy with cock. Which is fine, but makes me wonder... Why post that in this forum?

Played the first chapter before deleting it.. have always really loved the Final Fantasy franchise. Hate this wave of IAP "games" that are little more than skins for a storefront. An insult to gamers fueled by laziness and greed. Will NOT be supporting the development of such games and I think it's a shame that Square Enix would take FF down this road.

Durentis said:
Played the first chapter before deleting it.. have always really loved the Final Fantasy franchise. Hate this wave of IAP "games" that are little more than skins for a storefront. An insult to gamers fueled by laziness and greed. Will NOT be supporting the development of such games and I think it's a shame that Square Enix would take FF down this road.

so instead, lets all play a gay where you can pay 20$ a month for as long as you play, or pay 80$ up front for a game you may not even like right?

do you know how many times I've pay 59 or 69 dollars for a new release game because the "reviews" were great to find out its utter trash? id rather put the 60$ into a game i enjoy over time, then waste it on a one time game.

Chair-Sama said:
so instead, lets all play a gay where you can pay 20$ a month for as long as you play, or pay 80$ up front for a game you may not even like right
Click to expand...

Yes. It happens. Sometimes you have to try a few to find a good fit. We are all of us unique snowflakes.


Chair-Sama said:
either way you are paying, at least this way if i don't like the game, i don't have to pay, or if I'm fine playing with it and i don't WANT to pay, i don't have to
Click to expand...

True-ish, but bypasses/hides/generalizes issues such as the quality of what you're potentially paying for and the total amount you can potentially pay, which for these games is an unjustifiable tens of thousands of dollars over a very short period. There are other, more ethical, ways for companies to give you free partial/trial access to games. These ways can only be demanded/incentivized by a solidarity of gamers who choose to not support the development of inferior games.


Chair-Sama said:
do you know how many times I've pay 59 or 69 dollars for a new release game because the "reviews" were great to find out its utter trash? id rather put the 60$ into a game i enjoy over time, then waste it on a one time game
Click to expand...

I've done so many times too (Diablo III comes readily to mind). If only such games as this ended at $60 over time, but they don't. The early period is extremely generous (look at all the "free" stamina you get levelling so quickly early on) specifically to get you hooked long enough to become addicted and pay just once - even if it's just $1. This is because anyone who they can get to pay once has been proven very likely to pay repeatedly and justify paying in larger amounts. The first dollar is the hardest hurdle to taking your money. The longer you play such a game as this though, the more crippled the gameplay feels and the more it makes you feel compelled to pay money to resume playing at a similar rate (or with similar pleasure) as you started. And there's no end to how much money the game can draw from you. You're being preyed upon whether you realize it or not.

Now, if you can stick to a reasonable $/time entertainment budget that makes you happy so be it. But know that by paying anything to companies for games such as this you are supporting lazy and greedy game development. You are ultimately depriving yourself of potentially better games that would cost you less overall. By allowing companies to make billions of dollars off of what are effectively skinned storefronts you are helping to discourage the good quality game design we've come to love prior to this model taking over - even if you have to try several before you find the truly memorable ones.

I just found out that Galaxy on Fire 3: Manticore is also to use this damn IAP model. I was really excited for another title in the series until reading that. Use of such a model makes GoF3 unworthy of its name. Fishlabs used to be a good company. Was it the acquisition by Koch Media (Deep Silver) that killed GoF? Such a shame, regardless.

I know full well that I'm an evaporated drop from the ocean and my words won't stem the tide. But I'm nevertheless disgusted with companies that adopt this model over the developement of quality games and feel little need to shut up and give them my money.