Starbucks today launched a limited iOS beta test for a new artificial intelligence assistant called "My Starbucks barista," which will let customers order their favorite menu items by speaking with a virtual barista within a new messaging interface in the company's mobile app (via TechCrunch).

If they choose to, users can also opt to simply type their order to Starbucks, similar to chatbots that have become popular in apps like Facebook Messenger. My Starbucks barista will ask to confirm the pick-up location for the order and can help customers through the payment process as well, leaving them only needing to pass by their local Starbucks and pick up their order when it's ready. 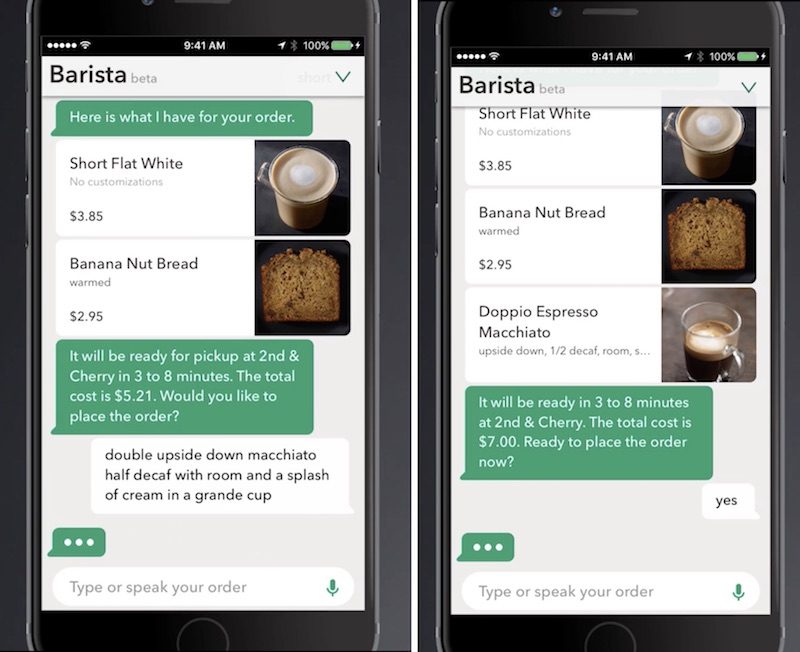 "The Starbucks experience is built on the personal connection between our barista and customer, so everything we do in our digital ecosystem must reflect that sensibility," said Gerri Martin-Flickinger, chief technology officer for Starbucks, in a statement. "Our team is focused on making sure that Starbucks voice ordering within our app is truly personal and equally important was finding the right partner in Amazon to test and learn from this new capability."
Click to expand...

Additionally, a new "Starbucks Reorder Skill" is being implemented for Amazon's Alexa devices, giving users the chance to simply say, "Alexa, order my Starbucks" to reorder their usual items. The process requires the Starbucks app to be installed, with an account already in place that includes a designated favorite order.

The Starbucks app has increased in popularity over the years thanks to its ability to let customers place orders online and arrive in the store to receive their drinks and food at the pick-up counter. The practice has become so popular in some locations, however, that customers have been known to leave when faced with long wait times. To fix the problem, Starbucks has begun hiring online order-only baristas, as well as testing out text notifications that alert customers when to arrive at the store.

The beta test is currently beginning, but is limited to a small set of 1,000 iOS users in the U.S., with "a phased rollout" estimated to begin on a larger scale this summer. An update to the Android app is said to come later in 2017.

The Starbucks iOS app is available to download for free. [Direct Link]

Even Starbucks is innovating more than Apple...
Reactions: pnoyblazed

Innovation is cool, but SBX should start with making good coffee first.
Reactions: 0970373, Cameroncafe10a, BuffaloTF and 1 other person

MacRumors said:
The Starbucks app has increased in popularity over the years thanks to its ability to let customers place orders online and arrive in the store to receive their drinks and food at the pick-up counter.
Click to expand...

Uh, no. The app is popular because it's the only way to earn stars. Or at least without carrying around a special card in addition to my phone and normal credit card. My local starbucks is terrible at handling mobile orders. Without fail, it is literally always quicker to show up, order in line, and receive that order than it is to wait at the mobile pickup counter to receive an order placed ahead of time.
Reactions: Cameroncafe10a and Solomani
I

I get breakfast there every morning. Sous vere eggs. They are amazing. I make my own tea to go with them when I get to work. I can't wait to be able to just shout at Alexa on the way out the door in the morning.
Reactions: unobtainium
H

You're comparing the term innovation to a beta Starbucks application? I really don't Believe this an appropriate comparison against Apple.

If you compare innovation, I think it would be more suitable to use that term what other electronic manufacturers are releasing/updating.

So will I get notifications reminding me to tip "My Starbucks Barista" in addition to the store's actual one? Heh.

Helloimjacob said:
And yet they still don't support Apple Pay
Click to expand...

It's very silly. You have to "reload your starbucks card" before you can pay in the app. Why can't I just pay you directly for the coffee instead of paying you for a virtual card which I then use to pay for the coffee?
Reactions: ILikeAllOS and i hate phones

Incremental innovation happens every time a new version of a product is released.

It used to be a very modest word, but Silicon Valley took it to the skies with their disruptiveness. As a result, people a hard time distinguishing between major earth shattering blockbuster billion dollar ideas and continuous improvement and evolution of a product.

It's an app. Don't get too excited.

You can't call a company that still identifies your order by scrawling a version your name across the cup innovative, but this is a step in the right direction. Shame the coffee's still mediocre and overpriced.

Jakexb said:
It's very silly. You have to "reload your starbucks card" before you can pay in the app. Why can't I just pay you directly for the coffee instead of paying you for a virtual card which I then use to pay for the coffee?
Click to expand...

It probably minimizes their payment processing fees. It's normally better to process fewer, larger payments instead of many small payments.

The human bariasta's days are limited. I predict that there's fewer than 10 years left before they're all gone, and I wouldn't be too surprised if they're getting pretty rare by 2022.

Jakexb said:
It's very silly. You have to "reload your starbucks card" before you can pay in the app. Why can't I just pay you directly for the coffee instead of paying you for a virtual card which I then use to pay for the coffee?
Click to expand...

You need the app to get rewards.
N

AlliFlowers said:
You need the app to get rewards.
Click to expand...

in china, it works exactly as he wants it to. MSR and payments are separate. you scan it like a loyalty card (can use an actual card, or a virtual one in their app) and then pay by whatever manner you like, including apple pay (which they fully accept. go china!). they also offer gift cards (which can be topped up like starbucks cards in other countries, but are often just bought as one time deals) which can now be added to the same app - but the downside is its still a 2 stage process.

but my rambling point is there's no functional reason it couldn't work like he asked. the only reasons it doesn't are commercial.