This has been a long time coming, but my room mate has been planning on moving out for a while to be closer to work(and his girlfriend) and I decided to just take over the full payment on the apartment.

He has a few lingering pieces of furniture, but I've already started "annexing" his old bedroom. It's ultimately going to be both a computer and reloading room. I'm working on getting tables and actually getting as much as I can permanently set-up, but here's about an hour's worth of work this evening.

On the left is a Cube connected to a 22" Cinema, in the center is a Sawtooth, and on the right is my Quicksilver with the Gigadesigns Dual upgrade(running at 1.6ghz) and a 23" HD Cinema. This computer has the 9600 PC&Mac, so I'm using an A1006 to power the ADC.

The Sawtooth is in serious need of more RAM-I just didn't feel like sorting through the RAM drawer this evening(although I do at least have my SDRAM drawer fairly well organized with the sticks bagged and marked by type). The last time I used it was to check capacities on unmarked sticks, and it got left with 3x32mb sticks.

I have the 17" CRT ADC and 15" ADC coming in. I also have a 17" LCD and 20" Cinema at my parents' house that will be brought in as space permits. That will give me the full collection of ADC displays.

Damn... I want to do that in a room in the basement, too bad my parents are making it into an office, lol
Comment

Altemose said:
The start of the new museum...
Click to expand...

Wing one of the museum. I found out where my new office is going to be, and I'll have plenty of room there for the "public" museum .

My new Quad(when it arrives) is probably going in there for a main computer, or if I have issues with it I'll keep using the dual core. I'm going to take a beige G3 in for writing, a Cube just because and probably an MDD(I'm thinking a single 1.25) as a secondary/TA computer. I may also use a 7100 running System 7.5 as a Localtalk-Ethernet bridge. There's already a nice serial port Laserwriter in the office that I can commandeer
Comment

Altemose said:
The start of the new museum...
Click to expand...

The museum is in Phoenix. This is the annex. His people are talking to my people.
Comment

bunnspecial said:
Wing one of the museum. I found out where my new office is going to be, and I'll have plenty of room there for the "public" museum .
Click to expand...

One of my college professors has a a really nice modern sizable glass office in the brand new Science Building and he has it chock full of PowerBooks, Quadras and a 22" Apple CRT to show off to all the other professors every day

Another one (with an office in the old building) has one of the nicest desktops ever. Dual 30" ACD's, Harmon Kardon Soundsticks, and a 2013 Mac Pro! (Used to have a G5 until last year). Snapped a picture of it while he was out one day: 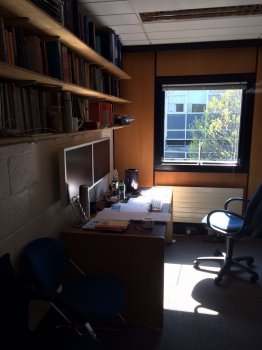 tevion5 said:
Another one (with an office in the old building) has one of the nicest desktops ever. Dual 30" ACD's, Harmon Kardon Soundsticks, and a 2013 Mac Pro! (Used to have a G5 until last year). Snapped a picture of it while he was out one day:

Those dual monitors are making me drool

You need some furniture there. I'd love to see the room filled up.
Comment

You need some furniture there. I'd love to see the room filled up.
Click to expand...

I'm working on the furniture, although I'm limited somewhat by his stuff still there(he's paying me a pretty generous storage fee until it's all gone). If nothing else, it's uncomfortable to use a computer on the floor

I'm probably going to watch for the next University surplus sale and see if I can pick up a couple of Steelcase tables and/or desks. I do have a nice old white oak teacher's desk at my parents' house that's coming up also when I have the space. I actually prefer just plain tables, though, as I don't need the storage space the drawers provide and they make it easier to put multiple computers on one table.

It won't be late '90s/early '2000s exclusively either . The oldest computer in there will be a c.1990 Macintosh SE. My late '06 iMac is going up there, and I do want to get a Mac Pro(probably a 2,1 or 3,1). One G5 is staying at my desk downstairs. I have a Quad on the way, which may either go up in the computer room or replace my office computer(in which case I'll bring the current DC 2.0 home for the computer room).

Of course, I have to leave space for the reloading equipment also. I have a couple hundred pounds of bullets(which don't take up that much space, fortunately) that need to come up, along with 40 or 50 lbs of powder, 10K or so primers(I'm running low) and who knows how much brass. It doesn't help either that I've gone nuts with casting bullets the past week. I bought a 6 cavity mold on Wednesday, and now that I have properly seasoned and going it takes me know time to crank out bullets by the hundreds. I had to stop and refill my 10lb lead pot a couple of times this evening-I'm working out of a 5 gallon bucket of wheel weights that started at around 150lbs and I'd guess is still well over 100(of course, I've thrown out a lot crap, too-iron and zinc weight don't even go in the pot, and the lead ones give up their steel clips and all the road crap on them).
Last edited: May 29, 2015
Comment

bunnspecial said:
along with 40 or 50 lbs of powder, 10K or so primers(I'm running low) and who knows how much brass.
Click to expand...

Your landlord doesn't mind having 50 lbs of highly explosive Smokeless powder in the building?
Or maybe he just doesn't know!
Comment

Nice man! I'd love to come visit sometime, as I like in TN, wouldn't be too bad of a drive. Esp. since I'm looking at UT Chat or Knox in the future. I wish I had a proper place to display all of my stuff.
Comment

jbarley said:
Your landlord doesn't mind having 50 lbs of highly explosive Smokeless powder in the building?
Or maybe he just doesn't know!
Click to expand...

Bricking a computer with a single Open Firmware command

Boyhood 1st computer back to life.