I have an Mac pro (2009), currently I have installed a GTX 580 which has been working for more than 2 years but now there is a strange horizontal lines and the whole interface is very sluggish when using OSX 10.11 but in bootcamp windows 10 there is no issue at all.
B

i have been having weird graphics issues on my mac pro 2009 also. i have a geforce gt120 gpu. i thought it was the graphics card failing, and purchased a used identical machine to try to decipher what is causing it. system has been sluggish the past month or so and i have 10.6.8 OS which has been solid and fast for me until recently. i also have been having odd repeating screen scrambles that are bizarre and no one on here seems to have any input.

i tried the other identical graphics card, still occurred. I switched my ram tray with the other from 1 x 16 gb to 4 x 2gb to see if that has any effect. and i also cloned my HD to a new SATA drive, and am booting off that to see if it may just be a failing HD.

is your issue different or are you seeing similar graphics? i attached pics of mine. 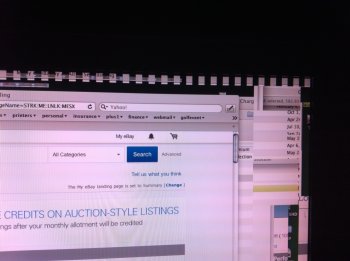 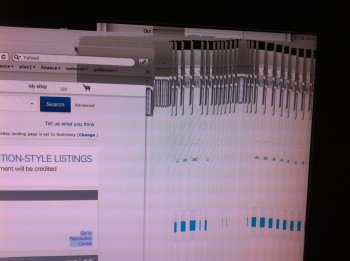 [doublepost=1462237242][/doublepost]i just cloned the hard drive today, restarted twice with the other ram still in. it seems to be running better, although i have not had any of the graphics issues on any consistent basis so it could just be coincidence. i am going through a process of elimination to try to see what the problem is in my case. i have ruled out the graphics card since it happened on both, as well as the ram. i think mine could have been the HD failing, or it is some issue with the CPU. if it occurs again, i will be down to either a ram issue, or the CPU, which i should be able to figure out since i have a second machine to swap everything over to.

When you see those graphics anomalies, take a screenshot. If the anomalies don't appear on the screenshot, your video card is dying.
B

they appear on the screen shot as well, when doing cmd shift 3.

If it's on the screenshot, then the problem lies elsewhere. Personally, I would try a clean install of the OS to eliminate software as the cause.
Reactions: ActionableMango
B

unfortunately, i cant do a clean install, as some of my adobe software does not have install disks. i did get a 10.7 os dvd, to do an upgrade if none of these hardware swap outs eliminate the problem.

Not sure if it helps. I have little graphic issue in the last few weeks. Occasionally have small block of corrupted graphic on the screen. Which may or may not exist on the screen shot.

I open the case, take out the graphic card, give it a blow from the exhaust, and blow the PCIe slot as well (any duster for electronics or compress air should able to do the job well). And then put the card back in.

Now the problem seems fixed. Nothing comes up for more then a week now.
B

h9826790 said:
Not sure if it helps. I have little graphic issue in the last few weeks. Occasionally have small block of corrupted graphic on the screen. Which may or may not exist on the screen shot.

I open the case, take out the graphic card, give it a blow from the exhaust, and blow the PCIe slot as well (any duster for electronics or compress air should able to do the job well). And then put the card back in.

Now the problem seems fixed. Nothing comes up for more then a week now.
Click to expand...

i have used 2 separate gpu's, both have been cleaned with compressed air thoroughly. i dont think my graphics cards are the issue.

I don't know if you're using the web driver or not. It's being reported on a few forums that the Nvidia web driver has taken a dive recently. In Photoshop it leaves nasty glitches whenever you try to use any kind of brush.

Reverting to the OSX driver fixes the issues, but 9 series owners can't do this.

adobe supply all it's software from there website, each time i do a clean install i just grab the CS6 sweat of the site and stick in my info always works fine.
(might be worth burning a copy on to a dvd as a backup)

have seen problems like this after using an osx update on an imac a while ago, just used the combo updater from the apple site and it seemed to fix it. but that was a long time ago osx10.6/7 days i gess.

id gess your using Cs3?
i was using Cs3 for a long time which locked me to osx10.6
if it's Cs2 adobe is giving that out for free (kind of) as they accidentally broke there activation server for it.
Last edited: May 3, 2016
B

i am not using a web driver that i am aware. when this started happenning, i did install the
CUDA Driver Version: 4.1.25 to make sure it was not a driver problem. like i said, i changed my graphics card, and it occurred with both.

i am on cs5.5. i have read that as long as you keep an older version of java 6, cs5 should work fine even up to el capitan.
i have suitcase fusion 4 also, which i do not think is compatible beyond 10.8.

i do not think this is related to adobe software. all that is functioning fine and screen errors do not occur while using adobe suite. since cloning my drive and booting from the new drive, i have not yet had any issues in days.
You must log in or register to reply here.
Share:
Facebook Twitter Reddit Email Link
Register on MacRumors! This sidebar will go away, and you'll see fewer ads.
Sign Up
Top Bottom