So this morning I enabled File Sharing and Remote Login in the Sharing preference pane, and now I get this whenever I use sudo:

It was working all yesterday. I haven't been poking around in the system files at all. I've been using sudo to burn my Raspberry Pi image to an SD card (used it for diskutil to unmount & eject the SD card).

I'm not sure if the File Sharing or Remote Login causes this or not, so I wouldn't recommend anything just seeing if it works, because I haven't figured out a way to fix it yet, without reinstalling OSX... If someone wants to risk it, then by all means, let me know.

If someone knows how to fix it, then definitely tell me! It would be MUCH appreciated! 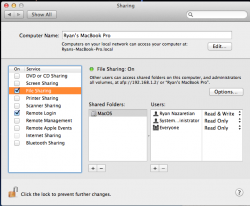 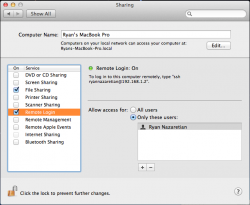 "sudo" and "visudo" in terminal: 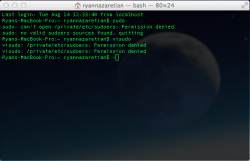 Fixed it already... I managed to find this posted on the Apple Communities:

Reboot & hold Command + S to boot into Single User Mode. You should reach a terminal with root permissions.

Then run the following commands:

Login, open terminal, and verify that it was fixed.

I checked by unmounted that SD card I talked about in the previous post:

I lucked out. Be careful.

THIS IS A CAUTIONARY TALE:

I did something unhelpful, like changing the default editor for visudo as according with somebody's advice on the internet. Then I tried to use:

nano came up as the default editor and when I exited without saving the newly generated, blank version of sudoers, I lost my sudoers.tmp content. No lines no characters. "Permission denied" came up for sudo on one command.

It did appear that I was able to rechange the .bashrc file and get rid of nano as the default editor for visudo. Then I could just run "edit sudoers.tmp". and cut and paste the correct version of the sudoers what I found on the internet.

Since the version found on the internet was a bog-standard one, i was able to save it and reboot the Mac.

I tried it again:

Although the sudoers.tmp file tells you to use only visudo because it does a syntax check, you can physically edit the file and trust to luck. I AM NOT RECOMMENDING SUCH ACTION. I did it because it was the only way out, like MacGyver trying to save the nation. Some folk advise to reinstall the OS. I don't know about that.

So, I don't fully understand all of the ins and outs but for Snow Leopard the following is the correct sudoers.tmp basic-issue file:


# sudoers file.
#
# This file MUST be edited with the 'visudo' command as root.
# Failure to use 'visudo' may result in syntax or file permission errors
# that prevent sudo from running.
#
# See the sudoers man page for the details on how to write a sudoers file.
#


# Same thing without a password
# %wheel ALL=(ALL) NOPASSWD: ALL