So, I recently bought some Swan M10 speakers from AudioInsider, after much deliberation. My indecisiveness stemmed from the fact that there is SUCH a lack of reviews/information regarding this speaker system. And so, I figure I should contribute a review!

Background
First off, I have a limited budget when it comes to personal audio equipment, but I try to search for the best quality I can get within my range. I've been using M-Audio AV30s with my computer for about two years now, so I'll be loosely comparing the M10s to those. I do audio professionally now and then for various theaters and whatnot, so I have an idea of what sounds 'good,' although 'good' is definitely up to personal preference. Anywho, the M10s appealed to me on account of the smaller subwoofer -- I live in an apartment building, and buying a huge sub would simply be discourteous. 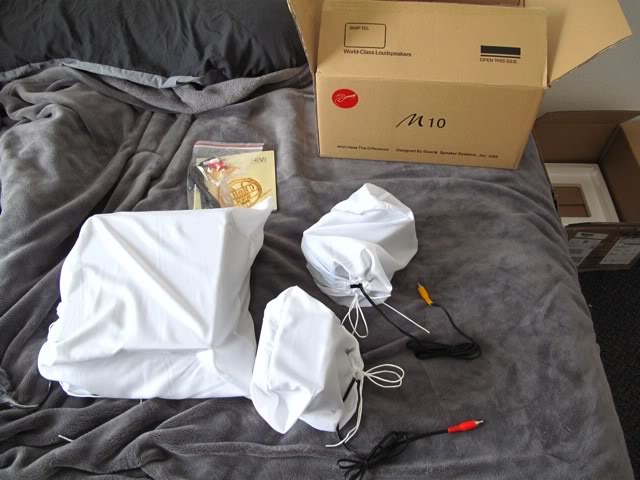 Well, it was double-boxed with molded styrofoam. In the box there was a gratuitous pamphlet from Hivi, those silly white gloves, and a stereo to RCA cable. It all got here from across the country in one piece, so I guess they did a good job. 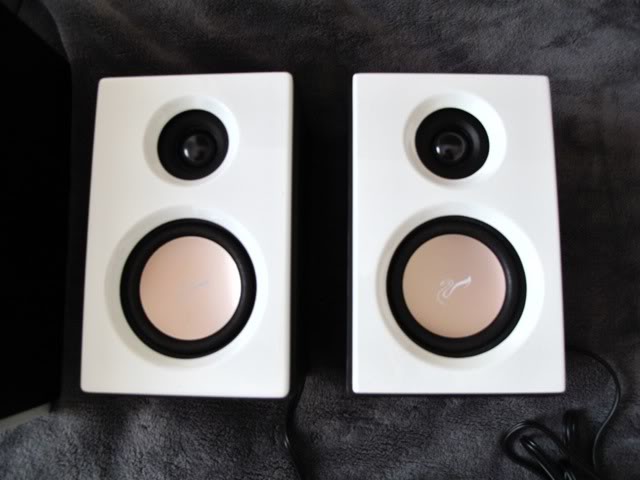 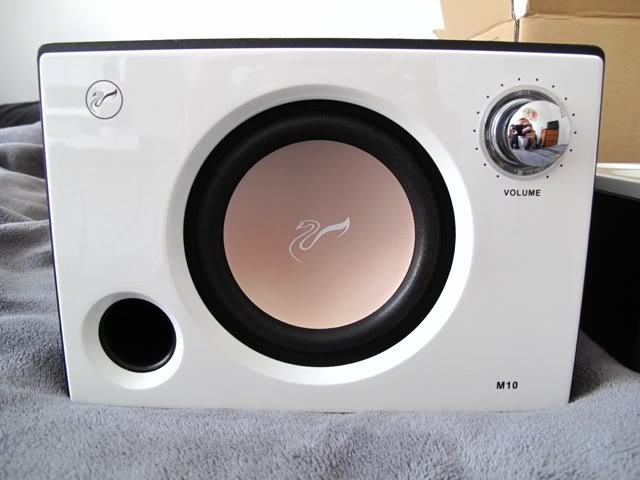 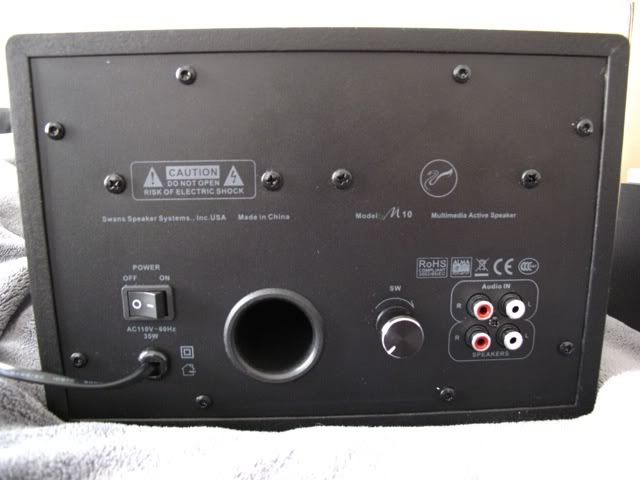 Initially, I was surprised at both how light and how small the satellites are. All three of the speakers look very beautiful, and the overall aesthetics are quite appealing, at least for my tastes. All of them have four little rubber feet, which I rather appreciate, as my AV30s were bare on the bottom.

On a somewhat pedantic note, the logo on the sub (upper-left) is neither 'Hivi' nor 'Swans.' When doing the research on these, I thought it was rather strange that there were differences anyways, but this set has a logo I didn't come across. Fortunately, I prefer this one.

Additionally, the fascia is not a matte/plain white (as I expected), but ... sparkly: 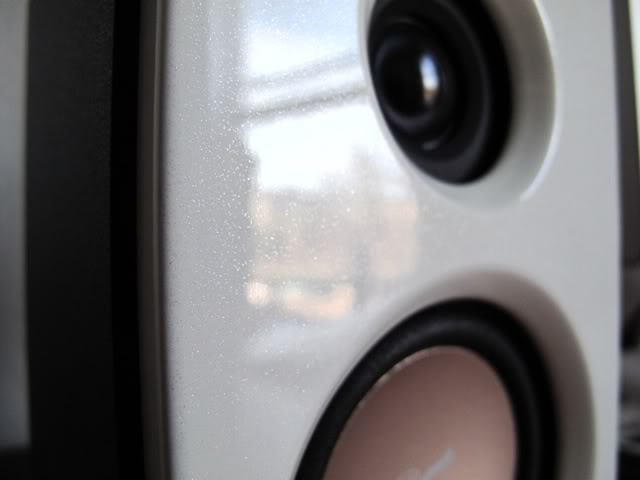 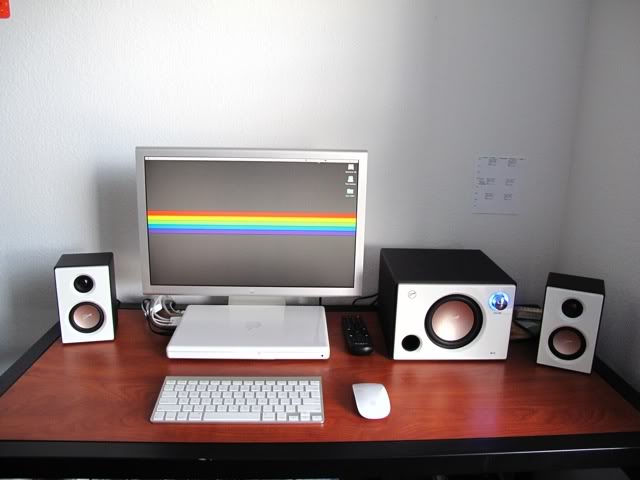 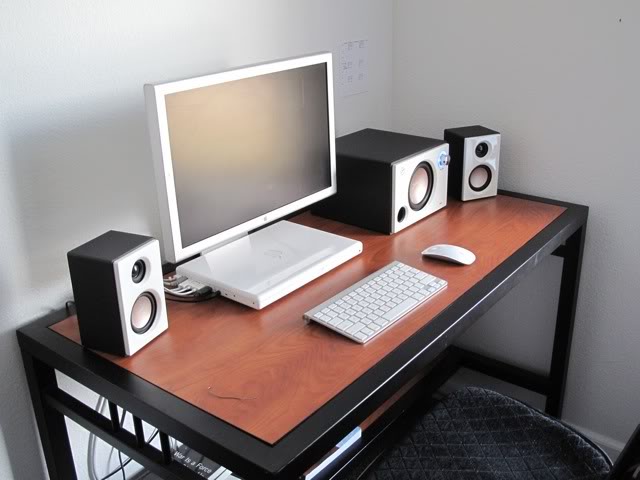 At first, I tried centering the monitor/computer on top of the subwoofer, but it was comically tall. So I opted for this set-up. It works out just fine acoustically and I think it looks great.

As far as performance goes, overall, I'm impressed! Despite their size, these speakers can pack quite a punch, if you so desire. I would describe the sound as open, separated, and clean. The mids and highs are vivid and sound just great. In comparison, the AV30s (which are now connected to the TV and are working brilliantly there) sounded somewhat boxed-in and ... heavy. The Swans bring a certain levity to the music, approaching on bright.

It took a little tinkering with the knobs and EQs to get the subwoofer at a preferred volume. I find this sub works rather well for my applications and is a vast improvement upon my old AV30s. It's no house-shaker by any means, and I wasn't expecting that. It drops off at around 40hz. Above that, I would describe the bass as deep. It's definitely not 'boomy' as with bigger subs, but it's rich nonetheless.

That said, despite these romanticizations, there are MANY speakers that sound better, much better, than the Swans. However, those speakers also cost hundreds more. For the price, the M10s are a great value. Some will find these speakers underpowered, perhaps even 'thin' sounding. But I say to them, in the best sense, caveat emptor.

All in all, I highly recommend the Swan M10s. Just know what you're looking for. 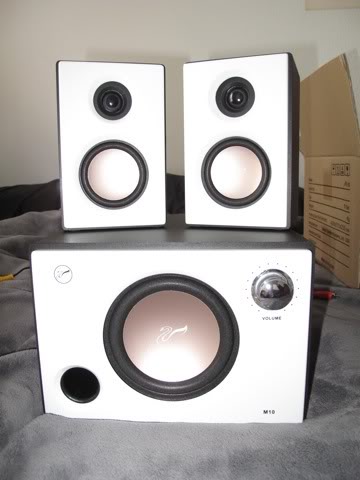 That speaker set up sounds (?) like they would serve well as computer speakers, without breaking the bank. Nice review, thanks.
G

Very nice review. I really admire your setup. I've been on the fence about the M10s for a while.

Mind asking what you paid for these?

I thought it was a little on the expensive side initially seeing as the AudioInsider had them for cheaper several months ago. But after using/hearing them, the frugal side of me was pacified -- I think they're worth what I paid.
D

I have been looking at these speakers for my MBP and have heard they sound great but was concerned with the blue light on the volume knob.

Is it too bright to leave on at night in your bedroom???


DiddyMac said:
Is it too bright to leave on at night in your bedroom???
Click to expand...

I have to say it's rather bright, as far as electronic lights go. But that doesn't mean it's like a strange blue Maglite in your face all night; think more along the lines of the luminance of a nightlight or a digital alarm clock with blue typeface.

Personally, it doesn't bother me -- I find it soothing, actually.
G

I've never seen these with that black Swan logo in the upper left corner. Mine just says "Swans" with silver letters, which in my opinion looks quite a bit better. Not that it matters a lot, the sound quality is more important I guess.

I love them, but they were really hard to get here in Europe...

G-Force said:
I've never seen these with that black Swan logo in the upper left corner. Mine just says "Swans" with silver letters, which in my opinion looks quite a bit better. Not that it matters a lot, the sound quality is more important I guess.

I love them, but they were really hard to get here in Europe...
Click to expand...

Mine have a picture of the Swan as well. I did purchase them recently so maybe the company changed it up.

I ordered the black ones. They are *OUT FOR DELIVERY* as we speak.

Just Delivered! Pictures for everyone!

LightSpeed1 said:
Just Delivered! Pictures for everyone!
Click to expand...

Definitely looks good in black as well. Unique as I don't think many people have them in this colour.


Sent from my iPhone using Tapatalk

In my time here, looking through these threads, I haven't seen anyone with the black one's. As far as that swan in the upper left hand corner, the website picture said HiVi in silver letters. I did think that the letters was a better look. But like the one guy said, it's the sound that's most important.
Last edited: Apr 13, 2011
H

How are you finding these? I have tried periodically this year and last and no luck.

OnYourKnees said:
How are you finding these? I have tried periodically this year and last and no luck.
Click to expand...

This is where I purchased mine. I ordered them on Sunday and received them on Tuesday.

So, my M10s have had their requisite "burn in" period, and I must say, they do sound better. The bass has deepened and tightened up quite nicely.

I know from reading past reviews and threads, people have expressed concern with the shielding of this system (receiving random radio stations and whatnot). Personally, I haven't had any issues. Perhaps Hivi has remedied the issue, or I just happened to get a well-shielded set.


LightSpeed1 said:
Just Delivered! Pictures for everyone!
Click to expand...

Ohhh, the black is interesting and pretty! I didn't even know they existed. Let us know your impressions on their sound sometime? There are too few reviews out there for the M10s!


OnYourKnees said:
How are you finding these? I have tried periodically this year and last and no luck.
Click to expand...

Hmm, Lockware Systems like LightSpeed1 said seems to be your best bet at the moment. AudioInsider.com is out of stock, but it seems you can still place an order or a reservation for when they get some more (Spring 2011, the website says ...). And there's always Ebay/Craigslist/et cetera to check out now and then. I hope you can find some!

I didn't know they came in black myself. While I was looking for a place that had them in stock I stumbled on Lockware Systems. This was the second place I had found that carried them, after looking at AudioInsider.com (which was like you said, out of stock till spring). It just so happened that the black m10's was an exclusive only offered through Lockware Systems.

As far as my impressions, I absolutely love these speakers. Especially at the price. Your review was perfect in describing what you do and don't get out of these speakers. To go into my impressions would just be repeating the same points. It was your review that pushed me into the direction of the M10's and I couldn't be me happier I stumbled upon it. Thanks.
Last edited: Apr 27, 2011

The M10s sure are a great find. Hopefully more vendors will eventually start selling them ... I know there's a market out there somewhere. Or at least keep them in stock. >_<

And thanks for your kind words -- I really appreciate it!

amolatinam said:
The M10s sure are a great find. Hopefully more vendors will eventually start selling them ... I know there's a market out there somewhere. Or at least keep them in stock. >_<

And thanks for your kind words -- I really appreciate it!
Click to expand...

No problem, this is exactly what forums are for.

Love the black ones but the white ones probably look better with the imac.
Apparently they are discontinued now can anyone confirm?
S

AppleDApp said:
Love the black ones but the white ones probably look better with the imac.
Apparently they are discontinued now can anyone confirm?
Click to expand...

I'm looking for a set in either white or black, does anyone know a place that has them available now?