iOS and Android keyboard app SwiftKey today announced its "biggest update" since the company was acquired by Microsoft in April of 2016. SwiftKey 7.0 includes a "Toolbar" designed to give users fast access to features that are both old and new.

Found under a new "+" sign to the left of the prediction bar, Toolbar will give iOS users the ability to quickly add emoji, GIFs, and items copied from the Clipboard into their messages, as well as customize the keyboard's theme. 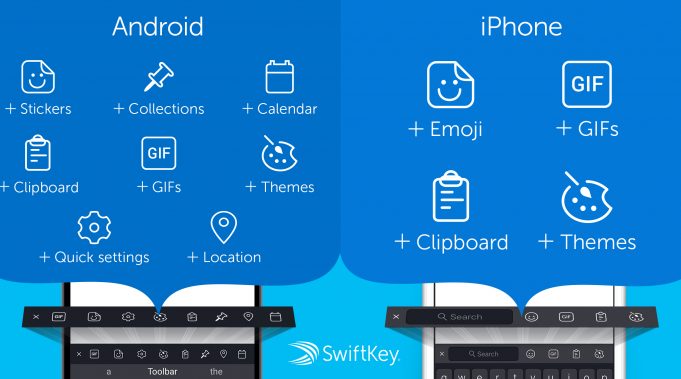 For Android users, Toolbar will house a few additional features like stickers, collections, calendar, and quick settings. SwiftKey 7.0 also adds in eight new 'Lish' hybrid languages, in this case letting people shift between English and Indic languages. SwiftKey said that down the line it will launch location sharing for U.S. and India-based users, as well as Calendar sharing, so that you can insert addresses and appointments into messages.

Third-party keyboards grew in popularity following the launch of iOS 8 in 2014, which introduced the ability for iPhones and iPads to support such keyboards on a systemwide basis. Companies like Fleksy have faced major changes in the ensuing years, and others -- like Swype -- have shut down completely. Along with SwiftKey, Google's Gboard is one of the other major third-party keyboards for iPhone.

SwiftKey is available to download for free from the iOS App Store [Direct Link], and users should begin seeing the version 7.0 update rolling out today.

Been playing with SwiftKey and GBoard. GBoard gets most of my intention with swiping correct. SwiftKey seems to get it more wrong than right. And deleting your "learned keyboard" from SwiftKey requires an entire uninstallation instead of simply clearing the cache. It's a tough sell, even with this new Toolbar, when GBoard already has all that.
Comment

I'm a beta tester on my iOS devices for SwiftKey.
I have version 2.2.4 installed.
Version 7.0 makes no sense.
Comment

PierJes said:
I'm a beta tester on my iOS devices for SwiftKey.
I have version 2.2.4 installed.
Version 7.0 makes no sense.
Click to expand...

I think they mean android 7, but yeah iOS is 2.2.4 how has the beta been I think of toolbar is silly but is it better speed etc
Comment