T-Mobile revealed today in its Q3 2013 results that it sold a total of 5.6 million smartphones in the quarter, including 3.6 million under its own brand. As noted by AllThingsD, T-Mobile Chief Marketing Officer Mike Sievert indicated that the iPhone represented 15% of that latter number, putting iPhone sales for the quarter at just 540,000.

T-Mobile noted during its earnings conference call that it felt the iPhone sales percentage could have been better if it had had better supplies of the iPhone 5s at its launch in the waning days of the quarter. Many customers undoubtedly held off from purchasing iPhones for much of the quarter in anticipation of the new models, but T-Mobile was unable to make up for that slack following the launch due to very tight supplies.

On September 20, 2013, T-Mobile started selling the iPhone 5s and 5c with very attractive introductory prices of $99 down and $0 down, respectively. Total smartphone sales, including sales to branded prepaid customers, were a record 5.6 million units in the third quarter of 2013, equivalent to 88% of total units sold, up from 86% in the second quarter of 2013.
Click to expand...

Overall, T-Mobile announced the addition of over one million new customers to its network and service revenue growth of 8% year-over-year.

Earlier this year, T-Mobile became the last major U.S. cellular carrier to begin selling the iPhone and has attempted to differentiate itself from other cellular networks with new 'customer-friendly' rate plans that involve no annual contract. Earlier this week, T-Mobile CEO John Legere assured that all iPad customers on the carrier would receive 200 MB of free monthly data with "no exceptions", although customers must either have phone service through T-Mobile or sign up for at least a $20/month 500 MB tablet data plan if they wish to take advantage of the carrier's interest-free financing on iPad purchases.

Or, T-Mobile attracts more price-conscious customers who don't want to see the massive price of the iPhone amid sale prices of the Galaxy and other devices. I wonder if the international options will bring some new customers to the mix.

The reality is that T-Mobile isn't as clear-cut a winner if you have multiple iPhones on a family plan, compared to just one device. And, the real savings come from buying a used iPhone 5 on eBay and using it on T-Mobile.

It will be interesting to see if T-Mobile sales are a good indicator of emerging market sales, too. Same sort of buying options (off contract). This isn't necessarily bad, but it's certainly not good. The fourth-largest carrier in the US barely sold half a million iPhones. (You could also point to timing of T-Mobile's uncarrier options, and maybe people just haven't paid off their old phones yet.)
Comment

I think there were a lot of people like me who bought the phone from Apple and activated it on T-Mobile. They aren't known for their great stock capabilities and weren't even offering the model I wanted. They make more money on the service plans than the phones anyway, so I don't really see sales numbers as the issue. I think the issue is activations.
Comment
R

I'd like to see numbers for how many iPad orders were cancelled after the CEO mislead customers.
Comment
D

I think the reason T-Mobile is not selling more iPhones is the screen size. Many T-Mobile subscribers have gotten used to larger screens so current iPhones are seen as a downgrade to them. Just wait until the iPhone 6 with a larger screen is released. T-Mobile's iPhone sales will explode.
Comment
K

weird. i had no problems obtaining my 64gb space gray on launch day from tmobile. well, rephrase that. i did have problems, but once they got sorted, it shipped on launch day and i had it the following monday.

wish i could say the same for the ipads though.
Comment

Been with T-mobile a year now and really love them. Bounced around between all the major carriers the past 5 years and its the first time I'm really happy. Didn't grab an iPhone though, I touched the display Note 3 and knew it was love.

Two consecutive quarters of over 1 million customers growth. What Tmobile is doing is clearly working now. They added more customers this quarter than all 3 other carriers combined.

For those wondering why only 500,000 iPhones, you have to remember that at Tmobile stores supplies of the 5S were severely constrained. In fact most stores still don't have them in stock. Also for a good chunk of the quarter Tmobile was selling all of their phones for $0 while the iPhone 5 was excluded (per Apple's request), so a lot of their customers went for Androids. Plus in Apple stores those who want an iPhone for Tmobile have to pay full retail upfront because Apple doesn't handle the financing like TMO does in their stores.

Hopefully they continue to take customers from the big 2 and maybe force them to change some of their policies. Also hopefully they can find a way to acquire some low band spectrum to increase their rural high speed data coverage.

Switched to T-Mo from Sprint a week ago. Never looking back. 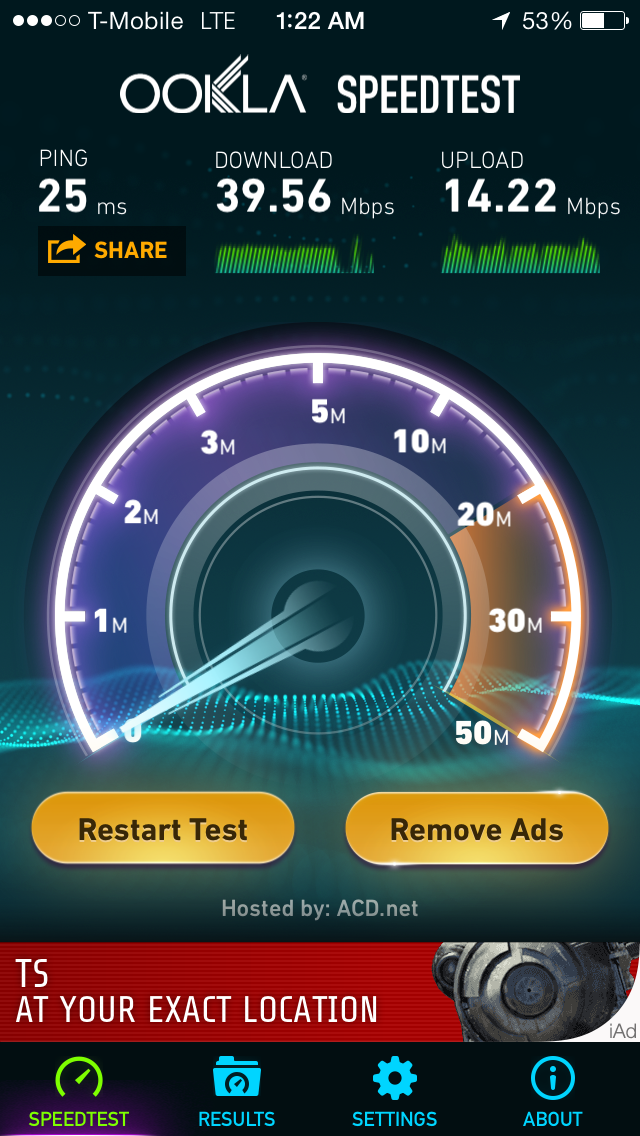 applerocks said:
The reality is that T-Mobile isn't as clear-cut a winner if you have multiple iPhones on a family plan, compared to just one device.
Click to expand...

One of the advantages that T-Mobile has over AT&T, Verizon and Sprint is that each phone line on the family plan gets its own data plan, no sharing of data. And if you keep the iPhone for longer then 2 years, the monthly payment drops while the other 3 keep charging the same amount each month.
Comment
You must log in or register to reply here.
Share:
Facebook Twitter Reddit Email Share Link
Register on MacRumors! This sidebar will go away, and you'll see fewer ads.
Sign Up
Top Bottom