The battery issues and the increase in data usage issues

One and the same?

I'd say yes. Anyone agree?

I love your detailed analysis.

saving107 said:
I love your detailed analysis.
Click to expand...

Sorry, Did I say I'd be analyzing? I just made an observation, and then you felt the need to threadcrap.

Am I wrong? perhaps.

But thanks for replying.

LapsangSouchong said:
One and the same?

I read somewhere (can't find it now ) that it has been discovered that under iOS5 the phone still uses 3G (for some things at least) even when it's connected to Wi-Fi.

I was out of the country the other weekend so using Roaming Data. My plan includes 25MB Roaming Data per day. At ~6pm I got a text from Vodafone saying I was nearing my limit (I think they send them when you hit 80%) so I reduced the amount I was using the phone (was using Maps a lot). An hour later I was back on the Wi-Fi at the hotel, and stayed connected to that until we went out the following morning.

So, it seems like my phone was using 3G even when it was on Wi-Fi. Coincidently (or not) this was around the time my battery usage went bad. Up until then I'd been getting excellent usage.

I noted a few times right after I updated my husband's 4 that his phone would use cellular data while asleep, while on wifi. So yeah, something is up.

parish said:
I read somewhere (can't find it now ) that it has been discovered that under iOS5 the phone still uses 3G (for some things at least) even when it's connected to Wi-Fi.
Click to expand...

And if you cared to read further, you'd also "discover" that previous iPhone models have done this as well under certain circumstances (such as when sleeping).

But there's a pretty easy way to find out if the battery and data usage issues are related... 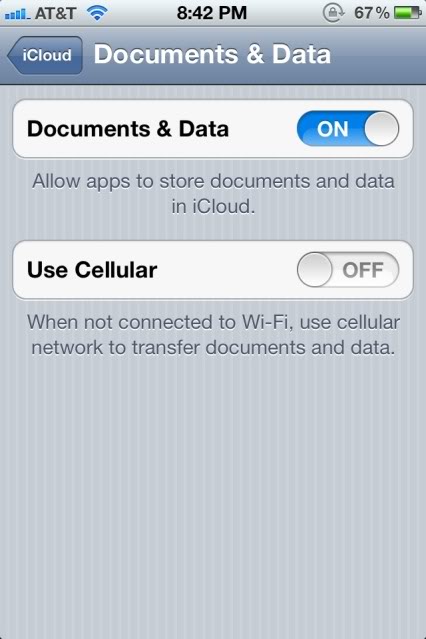 Do this, and see if battery life improves. If it doesn't, then turn off "Documents & Data" and see if there's a change.