The Best Apple-Related Accessories at CES 2021

CES 2021 is taking place digitally this year, and it hasn't been as exciting as in past years because many vendors have opted out. That said, some companies are still showing off some interesting Apple-related accessories that are coming out this year and that will be of interest to Mac, iPad, and iPhone users.

Wireless CarPlay is catching on, and Pioneer debuted its new DMH-WC5700NEX receiver with support for both wired and wireless CarPlay. The updated receiver features a 6.8-inch touchscreen and a hideaway control unit for installation flexibility. It's coming this summer, and pricing hasn't yet been detailed. 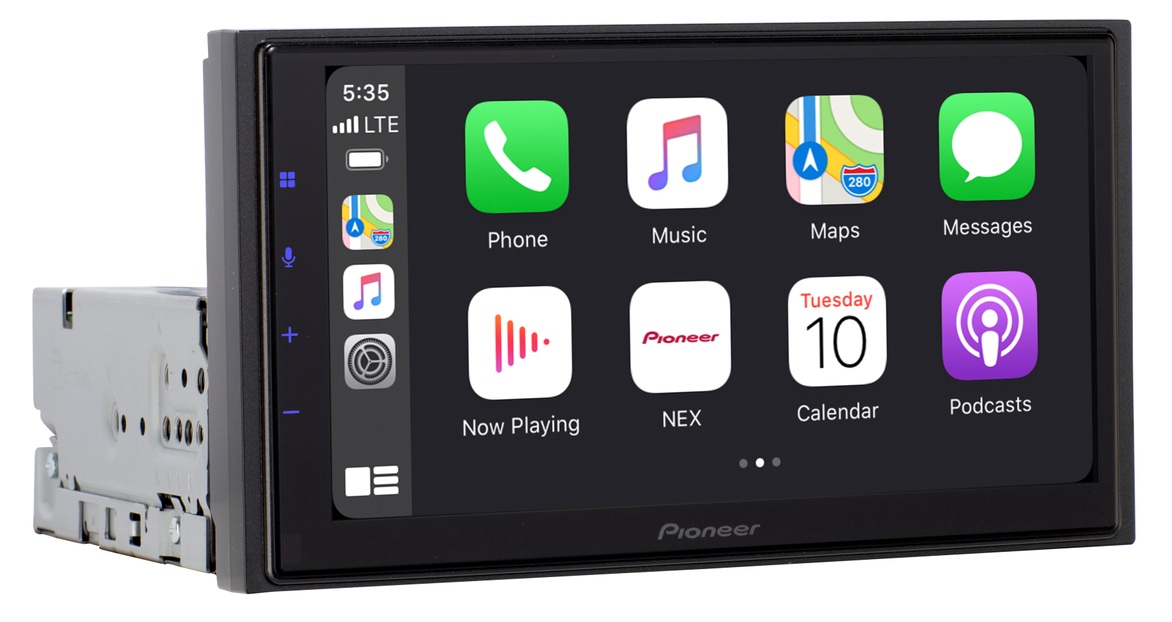 LG showed off a new UltraFine Display OLED Pro with a 31.5-inch display, more than 8 million pixels, and HDR individual pixel dimming. It's the first OLED monitor from LG, and like other UltraFine displays, it will be compatible with Apple's Macs. LG also showed off a new 39.7-inch 5K2K UltraWide monitor. Pricing and availability have yet to be announced. 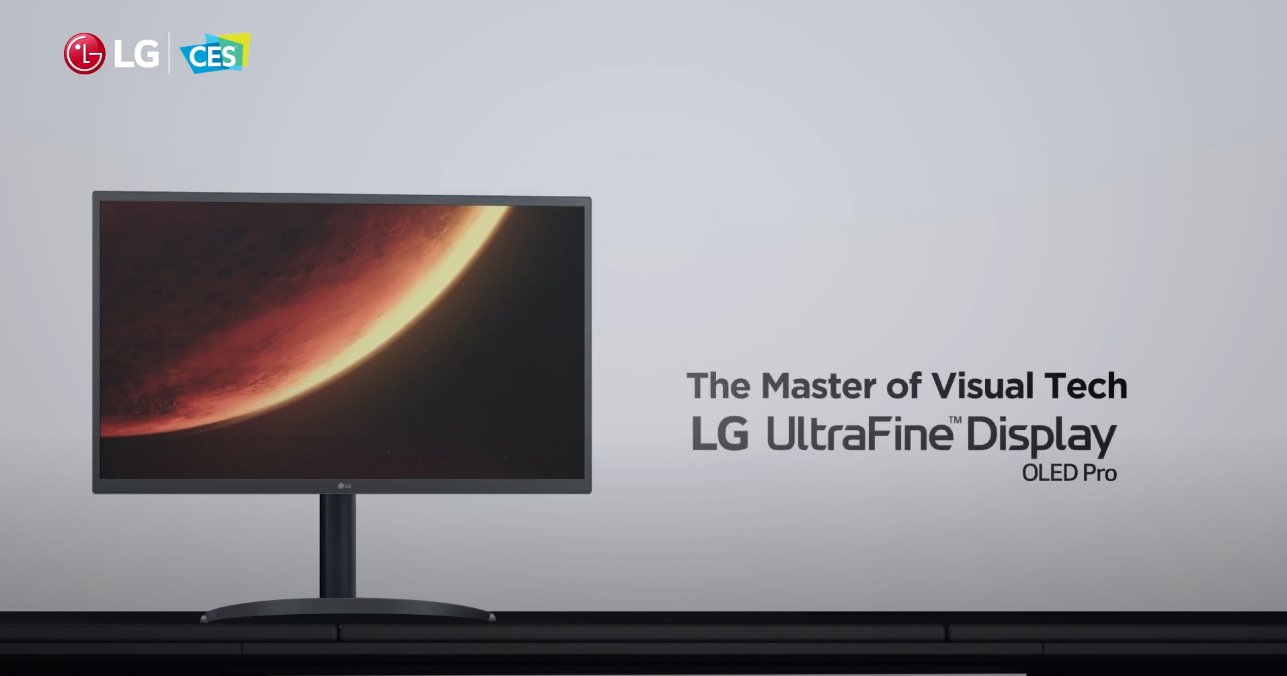 Satechi's Dock5 is a simple charging station that can accommodate up to five devices at one time with two 20W USB-C ports, two 12W USB-A ports, and a Qi-based wireless charger that supports up to 10W. It's priced affordably at $60, and can be purchased from the Satechi website. 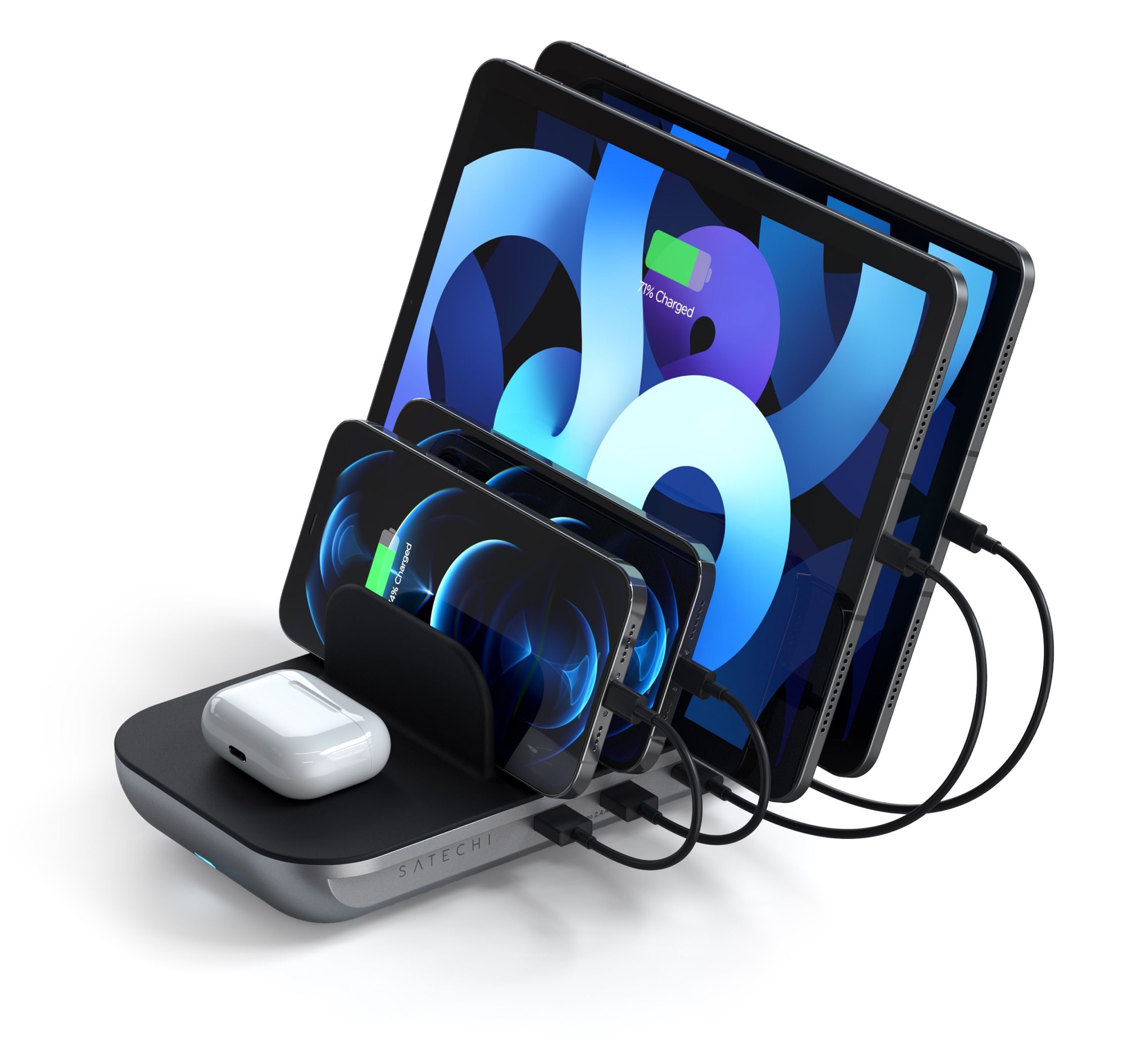 The StudioDock is an iPad Pro docking station that includes built-in iPhone and AirPods wireless charging, along with an optional Apple Watch charger for charging up a multitude of Apple devices all at once. It has three USB-A ports, one USB-C port, an HDMI 2.0 port, a 3.5mm headphone jack, an SD card reader, and a Gigabit Ethernet port. Kensington has not yet shared pricing or a release date. 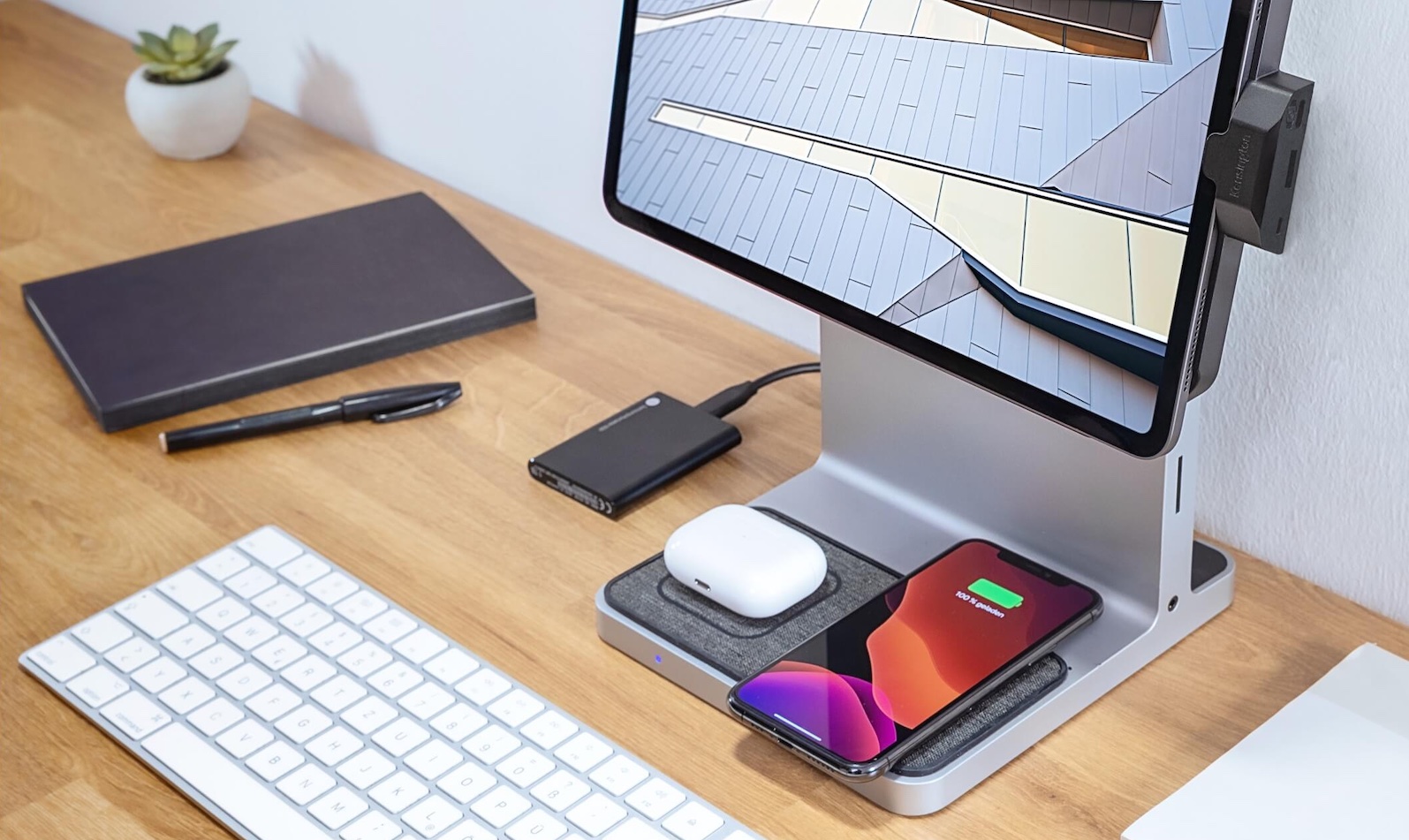 Dell showed off the UltraSharp 40 Curved WUHD Monitor, which features a 40-inch curved display with a 5120x2160 resolution. It has a 21:9 aspect ratio and built-in Thunderbolt 3 connectivity so it's able to work with Apple's Macs. The UltraSharp 40 will be available on January 28 at pricing starting at $2,100. 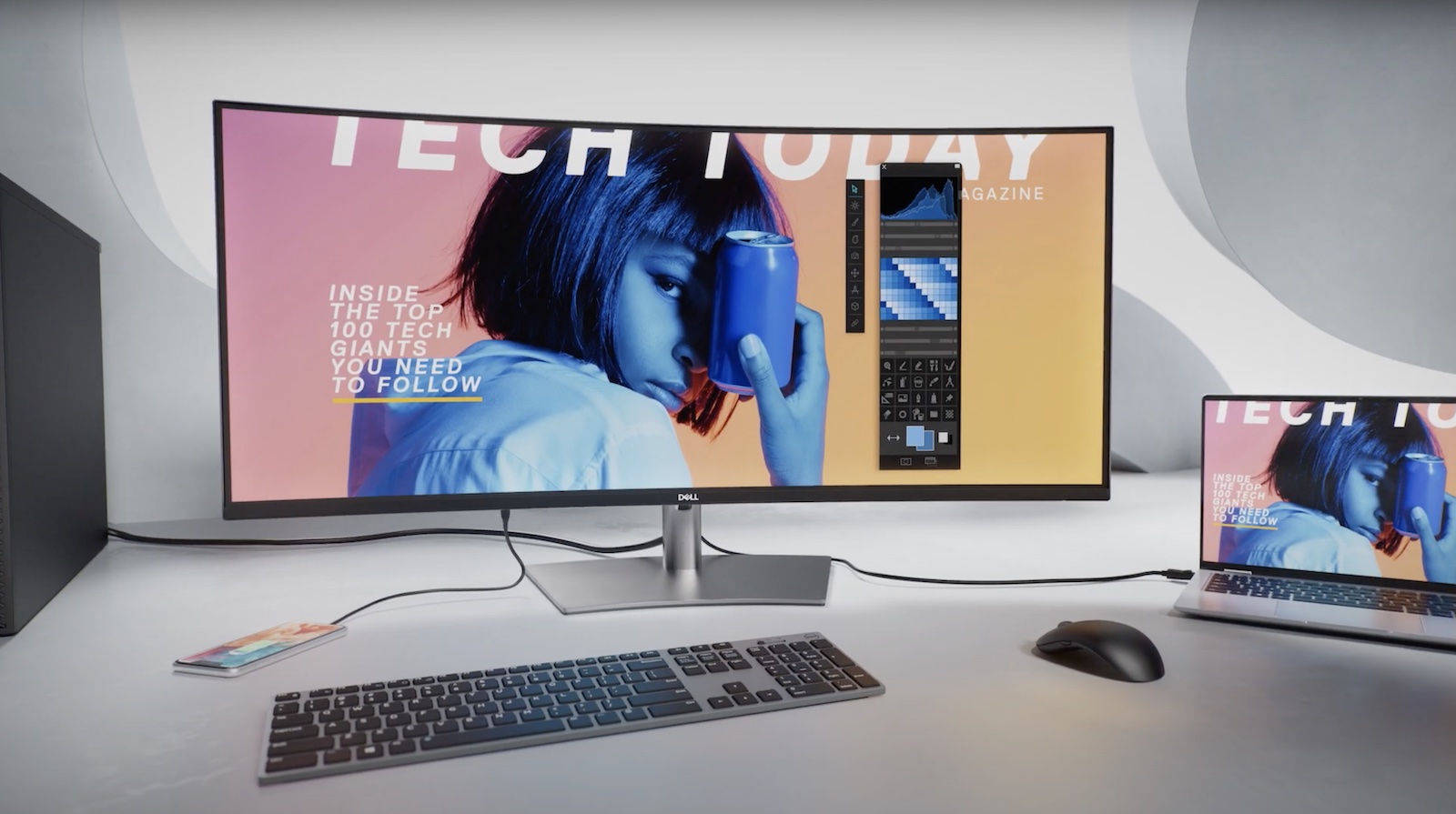 JBL debuted the JBL Bar 5.0 Multibeam, a soundbar with AirPlay 2 that makes it ideal for Apple users. With AirPlay 2 support, sound can be streamed wirelessly right to the sound bar from the iPhone, iPad, and Mac. JBL is releasing the sound bar in the Spring of 2021 and it will be priced at $400.

Belkin debuted another MagSafe charging option, the Boost Charge Pro 2-in-1 Wireless Charger Stand with MagSafe, which works with Apple's iPhone 12 lineup. It can charge an iPhone 12 and another device through its wireless charging base, and it's more affordably priced than the 3-in-1 version at $99.95. It will be available in March or April. 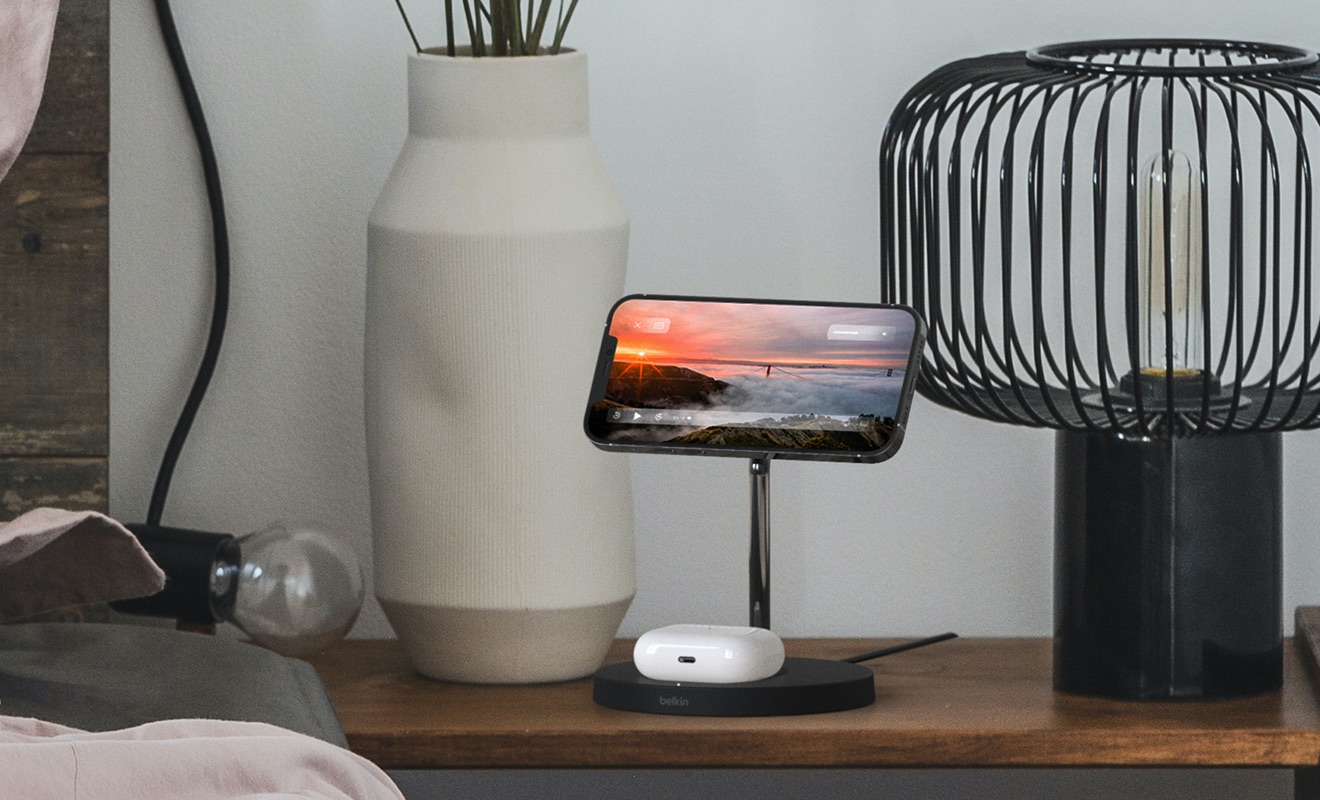 Belkin's wire-free Freedom True Wireless Earbuds under its Soundform brand are the first third-party earbuds to offer integration with the Find My app. These headphones can be tracked right alongside your Apple devices, plus they offer eight hours of play time, environmental noise cancellation, and Qi-based wireless charging. Pricing is unknown, but Belkin plans to release the earbuds in March or April. 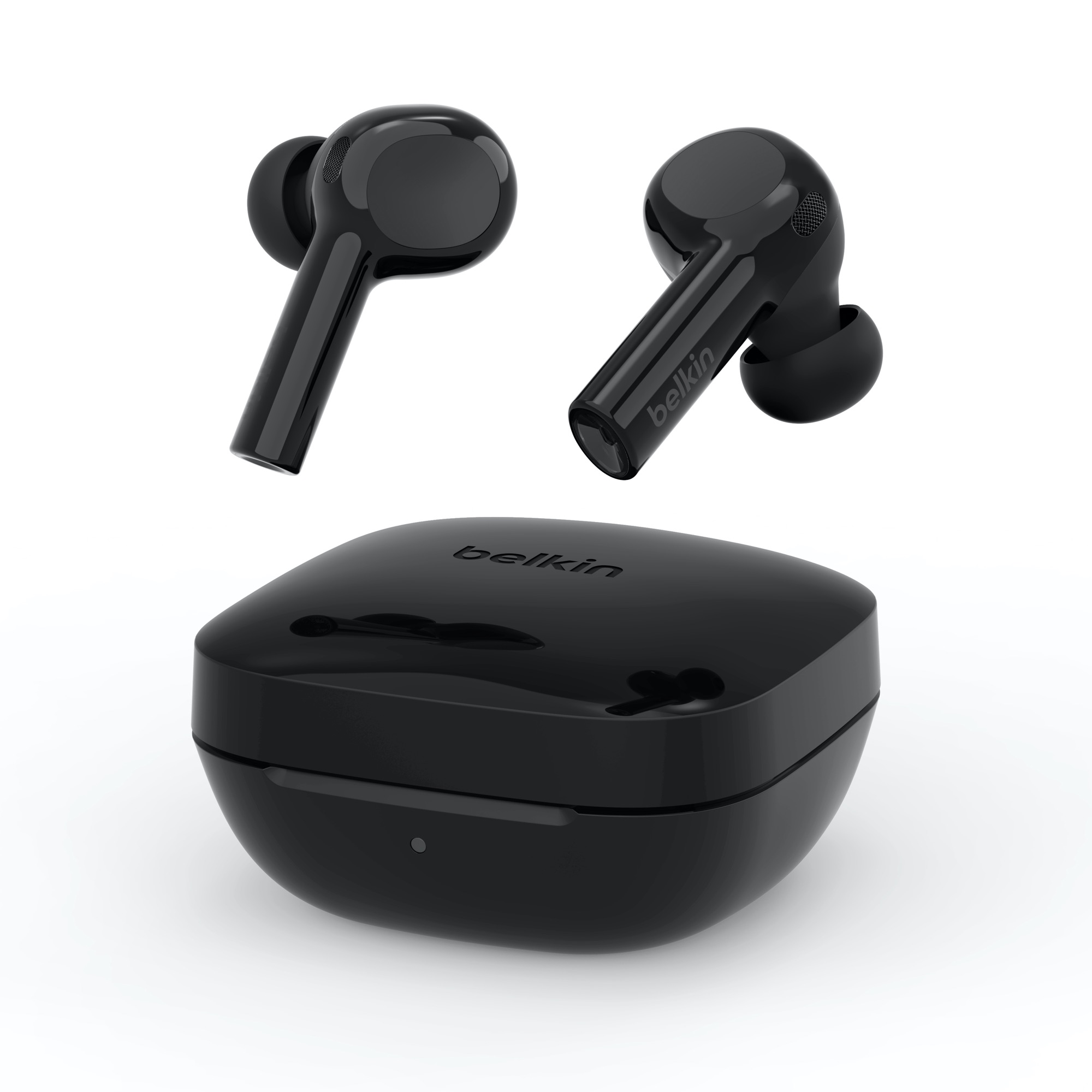 Do you have other favorite Apple-related accessories that were announced at CES 2021? Let us know in the comments.

That Satechi dock looks nice and is reasonably priced. That may sell well, especially around here.
Reactions: Mactopter, coachingguy and artfossil
Comment
C

Is it too much to ask for a HomeKit secure video doorbell that is sold in Canada? And not a “adding HSV at a future date empty promise”
Comment
P

Why release a sound bar at the same price point as a HomePod/4 HomePod minis?

LMAO "Best of CES"? There's been no best of anything from CES. Almost all the companies had nothing new to offer and if there were any innovations they were in the kitchen area such as fancy refrigerators that only millionaires would buy. Even Sony had nothing to show off. Some thinner gaming laptops and that's it. The rest was the usual vaporware.
Reactions: jimthing
Comment
S

pubb said:
Why release a sound bar at the same price point as a HomePod/4 HomePod minis?

There’s still a lot of people with cable and other devices that can’t use HomePod only for audio, the majority of people don’t have an Apple TV.

you could also ask why is the HomePod/4 HomePod minis the same price as a decent sound bar.

I’m more interested in what’s going on with the Belkin 2 in 1 MagSafe charger photo lol.... like ok that vase is dented, but why is there an open lightbulb just sitting on the nightstand?!
Comment
T

TheApplePro1 said:
I like the Belkin 2in1 charger which has power adapter and is much cheaper and better than Apple MagSafe Duo
Click to expand...

Technically not the same thing, as Belkin charges iPhone + AirPods, whereas MagSafe Duo charges iPhone (or AirPods) + Apple Watch. But at $100 vs. $180 ($130 for MagSafe Duo and $50 for 30W USB-C Power Adapter), it is a significant saving. Just be warn that Belkin requires iPhone to be either case-less, ultra thin case, or MagSafe case. Magnet isn't strongly enough to hold it in place otherwise.
Reactions: artfossil
Comment

This has got to be the most bleh "best of CES" I've seen by a pretty wide margin. 2020 continues to remind us how bad things were around the world. It would not surprise me at all that many products were held back so they could launch when more people have money to spend.
Reactions: iGüey and jimthing
Comment

california_kid said:
This has got to be the most bleh "best of CES" I've seen by a pretty wide margin. 2020 continues to remind us how bad things were around the world. It would not surprise me at all that many products were held back so they could launch when more people have money to spend.
Click to expand...

I do wish more aftermarket car stereo manufacturers would offer a unit with a physical volume knob. My 98 4Runner project car doesn’t have steering wheel controls and having to look down to find tiny volume buttons kinda defeats the purpose of keeping your eyes on the road. A physical knob offers an eyes-free tactile solution
Reactions: Tzerlag, Daedalus65, CCPisFascism and 5 others
Comment

I hope the Belkin charger was designed by a different team than the one featured in Macrumors’ previous article.

How I wish Apple would produce a Thunderbolt 4 NAS. But then I probably wouldn't pay for it, because I'd want NVMe SSDs, and we all know how much Apple charges for that. So I'll have to look elsewhere.
Comment
You must log in or register to reply here.
Share:
Facebook Twitter Reddit Email Share Link
Register on MacRumors! This sidebar will go away, and you'll see fewer ads.
Sign Up
Top Bottom