I’m just curious if they’ll call it a Mac Pro 7,2 or even something like a throwback to the old PPC version, and have it called a RackMac again.

Anyone have any thoughts?
E

I think they'll flip the current Mac Pro on it's side, with minimal fuss and call it a day.... oh and charge a bit more for it as well
Reactions: Nermal and OkiRun
L

Unlikely, but I prefer to resemble Xserve. So basically modern version of Xserve.

makes me wonder, can we lay our current 7,1 mac's on their side?
D

Ludacrisvp said:
I’m just curious if they’ll call it a Mac Pro 7,2 or even something like a throwback to the old PPC version, and have it called a RackMac again.

It is probably the the same motherboard with minor modifications in a different case. The only changes that need is to take the button and TBv3 plugs from the top and put them on the sides. (and the antenna connections molded into the handle base. but can do that with some wires.) That's it for electronics. The case is just mechanicals ( shouldn't impact the model number).

Can toss the "space frame" . The top and bottom 'plates' to the space frame. Wheels option. And simply just put the same motherboard in a rack suitable case. ( If the 'tower' version's motherboard has some empty 'chip pads' and traces to where the rack needs button , light and two ports then done. If the board is the same then it doesn't particularly need a different model family number . 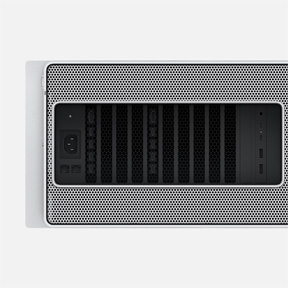 If look at the back view it is just the same stuff without the high end CNC, two sided holes. And a bit taller( wider from tower perspective) which probably helps with moving more air. ( The backside "blower" may be different but that wouldn't necessarily change the motherboard. ) . The Promise J2i mount probably won't mount. However, since "thicker", so there could be a much better place to mount SATA drivers here with optional brackets out of the CPU thermal air flow. 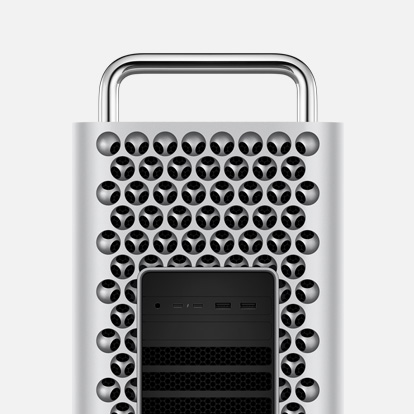 The tower makes the back look like the front. The rack version just has the front that way.

This would be similar to how the single and dual package Mac Pro 4,1 5,1 shared most of the infrastructure and different on CPU daughter card. This is even more straightforward electronically and different just on container. ( the new tower is a bit even more rack hostile than the old classic case. )
[automerge]1576473472[/automerge]

Korican100 said:
makes me wonder, can we lay our current 7,1 mac's on their side?
Click to expand...

On the floor? That would be bad.

On a desk? protruding legs into your workspace are a benefit how? Hard pressed could just it as a 'pizza box' stand for a monitor but it will look like a very odd duck.

Onto some shelf? It weighs far more than most things put on a shelf.

Inserted onto some rack/card ? Errrr, that is what the rack version is for. ( if trying to duck $500 , it is probably not worth the drama. )
Last edited: Dec 15, 2019
You must log in or register to reply here.
Share:
Facebook Twitter Reddit Email Share Link
Register on MacRumors! This sidebar will go away, and you'll see fewer ads.
Sign Up
Top Bottom