I just installed iOS 11 on my iPad Pro 12.9 (2015) and it has been great. But one area that has been frustrating is the Files App. I love the basic idea of it (partial file-like system on the iPad that consolidates files for iCloud, Dropbox, et.) but since installing iOS11 all my thumbnails for jpegs, PDF’s, videos and even Pages documents are gone when I open the App. Even the preview icon you see on front of the folders in iCloud Drive are removed leaving just a blue folder.

The actual files open fine when I tap on them. Just no previews.

Then sometimes the icons and thumbnails will partially reappear out of nowhere only to disappear minutes later.

They do return if I do a hard reboot - but that is not a good solution.

I should say iCloud on my iMac has no issues with these same files. Also, I have checked all my iCloud settings on both my MAC and iPad and all is the same as a week ago when this was not an issue.

It might not sound really important but it makes it really difficult to try and find files this way. iCloud Drive on iOS10 did not seem to have this problem.

I read it might be an Apple server issue as Dropbox still has thumbnails. Or a bug in iOS 11. But I’m not that knowledgeable on stuff like this and was wondering what might be going on or if anyone has any suggestions.

Sorry to hear you're having the issue as well, but hopefully this means it is most likely a bug in iOS 11 and can be fixed by Apple in a future update vs a hardware problem on our end.

Perhaps a bug report has been submitted about this during the betas.
Reactions: Clv1
Comment

I have had this problem too. On iPhone as well as iPad - and usually the same files. Have found that just making small edit to a file to save has been enough to bring the thumbnail back. Must be some bug in iOS 11? Hope it is corrected as is annoying.
Reactions: Clv1
Comment
B

Jonathantuba said:
I have had this problem too. On iPhone as well as iPad - and usually the same files. Have found that just making small edit to a file to save has been enough to bring the thumbnail back. Must be some bug in iOS 11? Hope it is corrected as is annoying.
Click to expand...

It’s weird. One day it will seemingly be fixed - with all the thumbnails displaying, then after opening another Files folder and letting those new thumbnails load, the thumbnails then disappear from the previous folder where they were just displaying correctly.

Almost seems like the system is running out of memory. But it can’t be as it happens within minutes after a hard reboot on my 12.9 iPad Pro - which has 4 GB if I remember correctly.

I do agree that it’s annoying and it slows me down quite a bit as I can’t tell what each file is without actually opening it. Hopefully it’s just a bug that was fixed (or will be) in 11.1 - but I have not heard much about others having the problem to begin with. So perhaps it’s specific to us for some reason.

Any insight from someone that might know what could be causing it would be most helpful.
Reactions: Clv1
Comment

I found this thread through web search and strange can’t find any mention of this problem elsewhere. In most ways iOS 11 is better, but the Files app is inferior to the previous iCloud app in some respects - this being one.
Reactions: Clv1
Comment

Same problem. I suspect it’s a memory management issue? Very bothersome as I use iCloud Drive to share photos to my phone. Now I have to go into each file to see what it is?!
Comment
T

So I'm not alone? I'm trying to move a much of stock art to the iPad to be able to drag and drop it - except I cannot see what the file is most of the time. Which is totally not helpful...

Utiful failed me in drag and drop support, oneDrive is failing in the same area - but both have thumbnails.
Comment

Seems to be related to filesize &/or pixel size??
& your connection strength.
the files have to download & icloud has to update & sync
mine will eventually show up
Comment

I have found the problem has disappeared with recent iOS updates
Reactions: Gravydog316
Comment
S

Jonathantuba said:
I have found the problem has disappeared with recent iOS updates
Click to expand...

Issue happening here on my iphone Xs Max running is 12.1

Here we are, two years later, and Apple has yet to fix the issue. Though I'm Apple on iPhone, iPad and TV, it impacts my Window usage with the same erratic behavior — no thumbnail without a lot of prodding — but only on copies of a saved, downloaded or screenshot image edited in iOS 13. Enough! 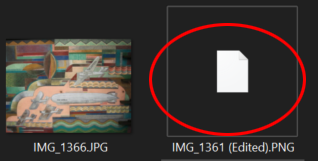