Ticketmaster Adds Support for Apple Pay to its iOS App

Ticketmaster today announced it has added support for Apple Pay to its iOS app. Available now, version 1.7.1 of the Ticketmaster app allows customers to purchase tickets for music, sporting events, and more with a single touch. 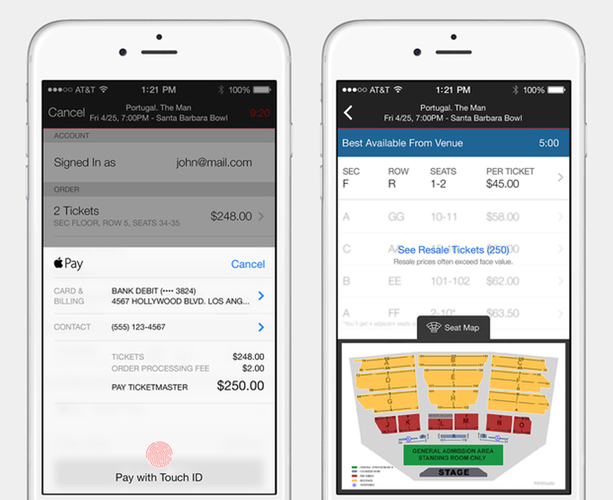 "We work hard to deliver simple and secure ways for fans to purchase tickets to the events they love, and offering Apple Pay makes our industry-leading app the most convenient, flexible and secure way to buy," said Jared Smith, president of Ticketmaster North America.
Click to expand...

Apple Pay is now two months old, and early adoption of the mobile payment service by retailers and consumers has been strong. A recent report from ITG suggesed Apple Pay accounted for 1 percent of digital payment dollars during the month of November.

Ticketmaster is a free download from the App Store. [Direct Link]

Cool! This should raise their "convenience fees" another 10 bucks or so.
Comment
A

room237 said:
Cool! This should raise their "convenience fees" another 10 bucks or so.
Click to expand...

It's always stressful to try to get good tickets through their service and then remember your login info and checkout in time so I'm really glad they added this.
Comment

iPhone 6/Plus only or any Touch ID enabled device for this sort of thing?
Comment
R

timsutcliffe said:
iPhone 6/Plus only or any Touch ID enabled device for this sort of thing?
Click to expand...

iPad Air 2 and iPad Mini 3 can use apple pay via app.
Comment

I am really glad for this app along with Seat Geek. This will also encourage the other ticket vendors to complete their apps.

Competition and not wanting to be left out is a key driver for Apple Pay.