Tidal has added the ability for users of the music streaming service to automatically add new albums to their music library as soon as they become available. 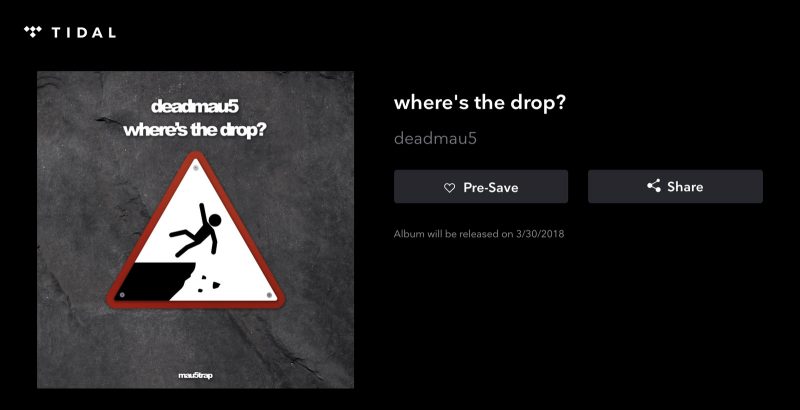 The new "pre-save" feature ensures albums are displayed in album collections the moment they're uploaded to Tidal servers on the official release day. The feature is launching in tandem with Deadmau5's new album Where's the Drop?, which can be pre-saved in advance of its official release next week.

Apple Music already offers a similar feature for pre-ordered albums purchased through iTunes. Spotify also has an equivalent feature, but so far it's only been used in artist/label marketing campaigns and requires a direct link to the album to use it, as noted by The Verge.

If you listen closely you can hear the 7 people subscribed to Tidal rejoice.
Reactions: tonyr6, Huck, Darkwalker and 1 other person
Comment

Maetzle said:
If you listen closely you can hear the 7 people subscribed to Tidal rejoice.
Click to expand...

Tidal definitely sounds better than the competition, but to get their highest quality they are priced ridiculously.
Reactions: roncron
Comment

How did anyone learn of this? You mean someone subscribes to Tidal?
Comment

mattopotamus said:
Tidal definitely sounds better than the competition, but to get their highest quality they are priced ridiculously.
Click to expand...

I got 6 months of Tidal HIFI for 99 cents though a BestBuy deal. Tidal was actually free, it was the CD i bought that was 99 cents. You can live off free trials, too, if you try (or care).
Comment
Y

I know exactly zero numbers of people who heard about Tidal.
Comment
A

YegorH said:
I know exactly zero numbers of people who heard about Tidal.
Click to expand...