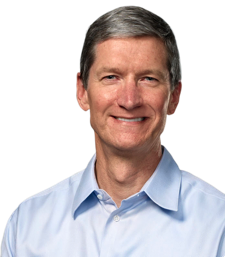 During Apple's annual shareholder's meeting today, CEO Tim Cook angrily rebuffed a representative from the National Center for Public Policy Research or NCPPR -- a conservative think tank -- that asked the company to disclose the costs of its sustainability programs, such as solar energy facilities, and to embrace a corporate policy that focused on profits above all else.

The representative asked Cook about the impact of the company's renewable energy programs on its bottom line, and also asked Cook to commit to only undertaking projects that were explicitly profitable.

The CEO did not take this well, according to a report from MacObserver, which said that Cook's body language changed significantly and his gentle and controlled speaking style gave way to a rapid-fire response.

What ensued was the only time I can recall seeing Tim Cook angry, and he categorically rejected the worldview behind the NCPPR's advocacy. He said that there are many things Apple does because they are right and just, and that a return on investment (ROI) was not the primary consideration on such issues.

"When we work on making our devices accessible by the blind," he said, "I don't consider the bloody ROI." He said that the same thing about environmental issues, worker safety, and other areas where Apple is a leader.
Click to expand...

Finally, Cook looked at the questioner and said "if you want me to do things only for ROI reasons, you should get out of this stock."

Following the meeting, the NCPPR released an incendiary press release that is heavily critical of Cook, claiming that shareholder value is destroyed in favor of efforts to combat climate change.

Finally some passion/emotion out of this guy!

Read this article earlier. Really embodies what Apple primarily stands for & how they separate themselves from competitors.

Never been a huge Tim Cook fan either, but massive kudos here.

Go Tim! I'm glad he put the NCPPR in its place!
S

What the guy from NCPPR is probably too stupid to realize is that a huge part of Apple's financial success is related to its image. Apple already takes a beating for any perceived human rights or environmental transgressions, precisely because its user base tends to skew so heavily liberal and socially conscious. If the company were to suddenly start placing profits above all else, how do you think this demographic would react? Of course, aside from any financial considerations, I really respect Cook for taking a stand on this.
B

Could only imagine if Steve was on stage at the time.

This is what makes a company: its ethics.

Apple and its employees care about more than profitability; they care about how what they do impacts the world, not how much money they make every quarter.
Z

Wow did anyone visit the site where the NCPPR listed their press release? Holy web 1.0! Didn't realize Angelfire was still around.

Also, Jobs always preached its about making products and pushing ideas to the limit. It's about the intersection of the humanities and technology. Not the bottom line.

markyr17 said:
Finally some passion/emotion out of this guy!
Click to expand...

Whether anyone agrees or disagrees with what was said, the above is very true. Emotion from RoboTim.

My respect for Tim Cook has increased greatly.

There is a body that thinks this? May as well call themselves "Money Grabbers of Doom" if they're going to be so blasé about their motives.
B

Johnf1285 said:
Wow did anyone visit the site where the NCPPR's site where they listed their press release. Holy web 1.0! Didn't realize Angelfire was still around.

Also, Jobs always preached its about making products and pushing ideas to the limit. It's about the intersection of the humanities and technology.
Click to expand...

Same thing I thought. It hurt my eyes.
8

Thanks for standing up for principled leadership Tim. Nice to see. A company that puts profits above all doesn't sit at top of "Most Admired Companies" lists. I'm proud of Apple for committing to renewable energy and hope other companies follow Apple's lead.
M

Wow. That got me liking Cook and Apple more than the usual.

I agree with Tim. It isn't like Apple to focus mainly on profits, they've never been about the profits. Just look at how hard they fight since before they were founded and the history since. Anybody not understanding this should GTFO of its stock and so on.

If Apple focused on profits only, they'd be dead by now IMO.

I love it! If you don't like the party, you can always leave.

The NCPRR are a wholly awful organisation. They are an embarrassment to the conservative name.

Everyone to NCPRR: Drop Dead.

Expects AAPL to tank on Monday due to this report.....

But, good for Tim/Apple. Companies who put profit first lose sight of why they are in the business.

MOFS said:
There is a body that thinks this? May as well call themselves "Money Grabbers of Doom" if they're going to be so blasé about their motives.
Click to expand...

Of course there is. They are called Bain Capital.