Popular task-managing app Todoist today announced a new AI-powered feature called "Smart Schedule," which intelligently takes into account user habits and pre-existing tasks to organize and schedule tasks on its own. The company said that it created the feature because so many of its users -- 70 percent in total -- face unfinished tasks each day.

With Smart Schedule, Todoist hopes that percentage will begin dropping as the new feature begins learning and adapting to the following factors: your habits, task urgency, weekdays versus weekends, upcoming tasks, daily and weekly goals, and more. On a personal level, Smart Schedule will be able to figure out things like what time of day each user checks their email, which day they read most, and suggest tasks accordingly. 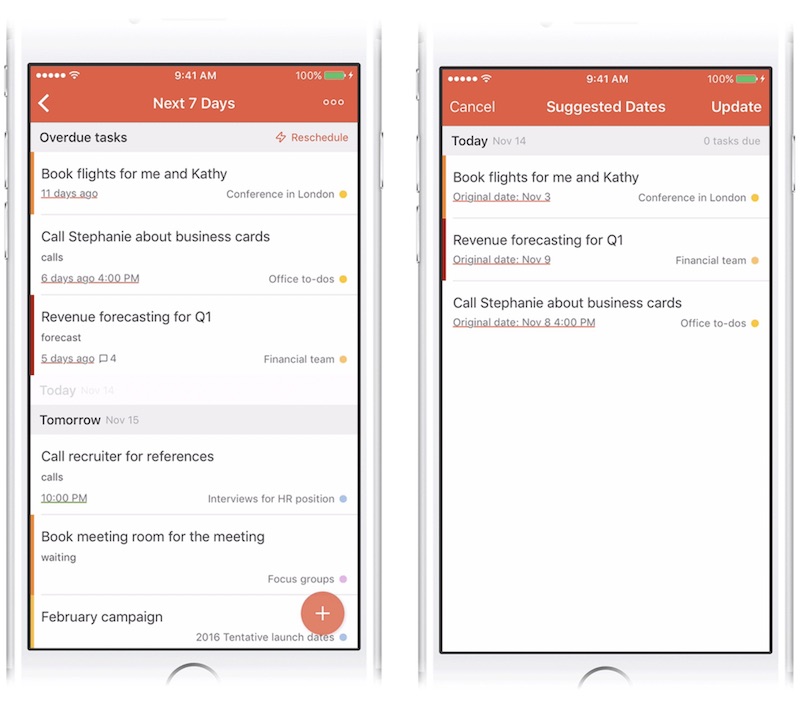 The feature will also accumulate anonymous data from all Todoist users to figure out how urgent generic tasks are, as well as when more users do tasks during the week ("check email") instead of the weekend. The company said that users will still have full control over their schedule, and can edit and delete Smart Schedule's suggestions as they see fit. Due to its AI-learning, Todoist also mentioned that the feature will only get smarter the more it's used.

Smart Schedule uses predictive modeling to help you easily plan out your tasks for the day and week to come. It learns your personal productive habits, and takes into account patterns across all Todoist users, to predict the best possible due dates for your tasks.

That means those 50+ overdue tasks you have hanging around can be quickly rescheduled en masse, while new and unscheduled tasks can be easily assigned to the best due dates. In this way, Smart Schedule makes it much easier to stay on top of your to-do list and roll with the punches when your day doesn't go as planned.
Click to expand...

Todoist also confirmed that Smart Schedule is "completely private and completely yours," with the feature's accumulating personal data never accessed by a Todoist employee or any outside service.

Wow. I was interested until I read $29 per year.
Reactions: Baumi

Everyone knows the best todo app is 2Do.
Been using it since version 2 on iOS 4 and over the years I've found nothing that has ever beaten it!

Well worth it, though, if you need a really comprehensive todo system. It's one expense I don't feel bad about paying at all. It covers all your devices, so you're more buying an account than an app.
[doublepost=1479358180][/doublepost]A really interesting idea, as long as it works reasonably well. I end up putting so much stuff in, that if things have due dates, it takes some time each day re-assigning them. I guess my fear (as with all AI type stuff) is what if it estimates wrong, and moves something out much further than I would have?

One thing I wish for this app, is that it would be less focused on all this 'natural language processing' and AI and such, and just make the UI more friendly towards directly entering stuff. I'd rather just type some text of the todo item, and then quickly pick things like due-date, re-occurring frequency, tags, etc. It often messes up when I'm trying type stuff like 'every month starting October 29th' or such, and I could have more quickly clicked my way there. Often, I just enter it in, let it mess up, and then click to fix. But, I wish the click to set were more accessible on initial entry.

We'll see how it goes once I start using it with my iPhone and Siri in the future (assuming we get more 3rd party Siri integration, which I suppose is now becoming possible?), etc. I guess that's where the natural language might start to shine. But, on my Mac, I think it slows me down currently over a more traditional point and click setup.

Overall, this is an incredibly powerful todo manager that is solid and available about everywhere. I used a couple of others in the past, including Appigo ToDo, and was either disappointed by things I couldn't do or had stability issues (and even data loss!). Knock on wood, but this has been rock solid since I switched (about a year ago).
You must log in or register to reply here.
Share:
Facebook Twitter Reddit Email Link
Register on MacRumors! This sidebar will go away, and you'll see fewer ads.
Sign Up
Top Bottom