Trimforce on a Fusion Drive?

Hello, I have a 5k iMac with a native fusion drive. Wondering if I should enable trimforce or how I can check if trim force is enabled? The system profile doesn't even mention trim support in the usual spot. Wouldn't the iMac fusion ship with trim force enabled by default?
Reactions: jgelin

That is where I looked and I didn't see Trim Support listed. How can I confirm my iMac was shipped with a fusion drive as it was supposed to be. Now I am paranoid it doesn't have one.
Comment

It seems the question has changed from:
trim force is enabled?
To:
confirm my iMac was shipped with a fusion drive?
There are a couple of ways, again check the System Report. 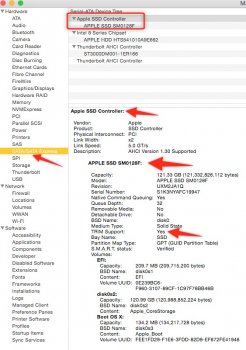 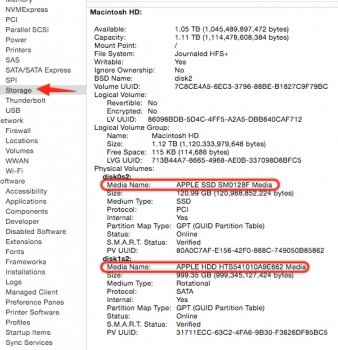 Ok, under storage I do see an SSD and an HDD but I don't see anything anywhere regarding Trim Support. Does this mean it is disabled or would it say, Trim Support: Disabled?
Comment

TRIM support is not listed under the Storage tab.
Look under the tab where the drive controller is listed.
CoastalOR post shows it under SATA tab.

The SSDs that Apple supplies would have TRIM enabled. No probs on that (even if it were an important issue beyond your own curiosity. )
Reactions: CoastalOR
Comment

honeycombz said:
Ok, under storage I do see an SSD and an HDD but I don't see anything anywhere regarding Trim Support. Does this mean it is disabled or would it say, Trim Support: Disabled?
Click to expand...

It has been awhile, but I'm pretty sure it will say:
Trim Support: No

That line has always been there on my Macs in the SATA section. I do know that the Trim Support: line will still be there whether the SSD has TRIM enabled or disabled.

EDIT: DeltaMac - Good catch. OP: Make sure you are looking in the SATA/SATA Express section.
Comment

Trim Support is definitely not listed under SATA. I'm concerned the fusion drive isn't even hooked up? I see the SSD under storage but then don't see Trim Support under SATA. I could just sudo trimforce enable and see what happens but I'd rather know there isn't anything else going on first.
Comment

Again, refer to CoastalOR post, and the Storage screen.
A Mac, with a fusion drive, will have both a hard drive (HDD), and an SSD. Two devices, combined into one drive. The Storage screen will show a line entry similar to one on CoastalOR's post - where it reads "Logical Volume Group". The Size shows you the sum of the capacities of both the HDD and the SSD.
The fusion drive means that both devices are used as a unit (so you have the Logical Volume Group)
So, it's easy. If you have a logical volume group, then one reason for that is a fusion drive, although it could be some other software combination. The fusion drive would then be a logical conclusion if you have a logical volume group.
If there is NO logical volume group in that Storage window, then all you have is an (uncombined) SSD and HDD, two separate devices, with separate volumes on each, not a fusion drive.
Comment

Attached are some photos

Your SATA does not show the Apple SSD and that is not right. A OS reinstall might fix the problem, but I think you need to talk to Apple about the problem.

The pictures I posted was my wife's 2014 Mac mini fusion drive, so you should see something similar. The interesting thing is the Storage does show the Apple SSD.
Comment

The SSD in OPs Mac is not an SATA device, and should not show up in the SATA tab.

But, the SSD does appear as part of the storage device (in the Storage screen), and appears to be configured as a Corestorage drive, so probably a fusion drive.
I don't have a PCIe Mac, so would it show up under the PCI tab?, or NVMExpress? Not sure where PCIe devices would be displayed.
Comment

So do I need to talk to Apple or not I'm a bit confused. Are there some Terminal commands I might run that would give me a bit more information?
Comment
Z

I ran first aid last week and I saw it display a step that said "Trimming Drive".
Comment

honeycombz said:
So do I need to talk to Apple or not I'm a bit confused. Are there some Terminal commands I might run that would give me a bit more information?
Click to expand...

I honestly do not know what to tell you. From your pictures, I can now see that you have a 2015 5k iMac with a 1TB Fusion drive. It has the smaller 24 Gb SSD which appears to be connected via PCI-Express instead of PCI, so I have no experience with that combination of fusion.

Here is a terminal command that may help. It will search the systemprofiler for TRIM:

Hmmm, that terminal command didn’t pull up anything and I tested it on another machine and it pulled up Trim Support so. If you were me, would you backup, sudo trimforce enable, and then take a look or is it not worth the headache to do anything.
Comment
S

The pci tab in the same screen shots you posted, your PCIe connected SSD should be in there and should show trim support. You are however worrying about absolutely nothing if you bought a fusion drive machine and have not replaced any drives then TRIM will be enabled simple as that.
Comment
You must log in or register to reply here.
Share:
Facebook Twitter Reddit Email Share Link
Register on MacRumors! This sidebar will go away, and you'll see fewer ads.
Sign Up
Top Bottom