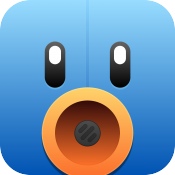 Following the release of Tweetbot 3 in late October, Tapbots has now updated its revamped app to version 3.1, re-adding several former Tweetbot options that did not make it into the redesigned app.

Users are now able to set a list as their default timeline by holding down on the "Timeline" title to open a list of options. Right swipe once again initiates a quick reply (and can be customized with a different action) and text can be resized within the app. Previously, the app relied on iOS 7's universal text settings.

Round avatars, which were introduced alongside the iOS 7 redesign, can now be set to square, and timeline badges can be hidden. The update also contains several other minor feature updates and bug fixes.

What's New in Version 3.1
- Using a list as your timeline is back (hold down on "Timeline" title to reveal the menu)
- Right swipe to quick reply (short swipe and release for custom action)
- Resize text within the app (Settings > Display)
- Option to set square avatars and hide timeline badges (Settings > Display)
- Email conversations or share via Storify
- "Last tweet x minutes ago" is back in the profiles (under recent images)
- Removed "Retweeted by" string so there's less chance of truncation
- Lots of bug fixes
Click to expand...

Tweetbot developer Paul Haddad has also noted on Twitter that Tweetbot 3 will gain a night mode option in a future update.

Tweetbot 3 can be downloaded from the App Store for $2.99 [Direct Link]