Videos shared from Vine and images shared from Flickr will now be shown directly within Tweetbot, without the need to open a separate window. Tweetbot includes native Vine controls that allow users to play videos via AirPlay and tweet links to videos. 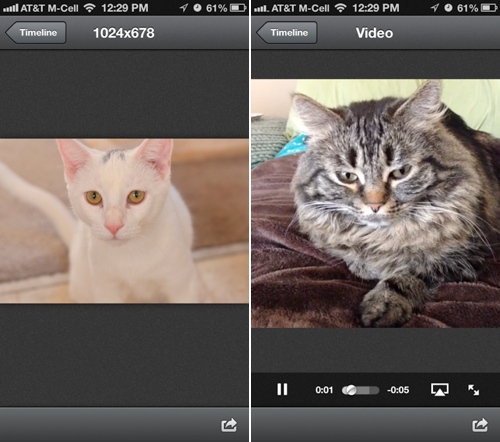 Inline image support for Flickr (left) and Vine (right)​
Tweetbot's new version 2.7 update also includes the ability to open links in 1Password or Chrome, rather than Safari, and adds better support for muting Tweets that include URLs.

I own all of Tapbots apps, and I love each one of them. From the converter, to their calculator, input 7734 and turn it upside down and it will spell hell and you'll hear flames! Great stuff all around.
Comment

Personally, I think it's great that Tapbots is making it easier to look at pictures of cats on the internet; it's just been so difficult up until now.
Comment

I'd rather be able to open links in Atomic Web or similar WebKit mobile browser with Adblock support.

And not from Google, TYVM, though the Adblock thing isn't really in their wheelhouse anyway.
Comment
M

Fresh Pie said:
Personally, I think it's great that Tapbots is making it easier to look at pictures of cats on the internet; it's just been so difficult up until now.
Click to expand...

Still no landscape Timeline on the iPhone... <sigh>
Comment

Indeed, "MacConvert2011" that was the point of the joke. Ironically, I'm not the new one here.

Just picked up Tweetbot for iOS a few days ago and I really enjoy it. Not many of my friends use Flickr or Vine, but glad to see the app supporting those features for those who do.
Comment