Earlier this month, Tweetbot for iOS was updated with a new "Topics" feature designed to link multiple related tweets together in a cohesive way, and now the Tweetbot app for Mac has been updated with the same feature.

Topics are built around the Twitter feature that links conversations. Tweets composed as a topic in Tweetbot are linked together via Twitter's conversation threading mechanism and use the same hashtag, so "Tweetstorms" or tweets surrounding a single topic connected. 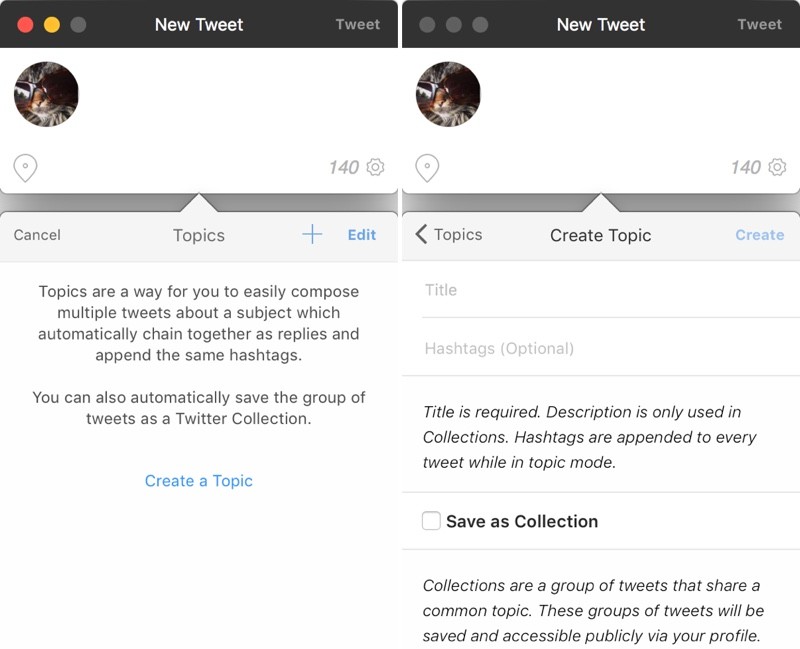 Linking multiple tweets together is often desirable in situations where a single tweet doesn't suffice, such as a lengthy rant or live event coverage.

This release introduces Topics. A Topic is a way to let you quickly Tweet a group of related Tweets without having to manually reply to yourself and/or manually add the same hashtags over and over again. They are really great for rapid fire live Tweeting events.

You can access Topics by tapping the gear menu in the New Tweet screen. They are also stored in and require iCloud, so you can start a topic on your iPhone and easily continue it on your iPad and Mac.
Click to expand...

Today's Tweetbot update also includes support for Collections, a way to save tweets linked together as a topic, and there are a number of feature improvements and bug fixes.

Tweetbot for Mac can be downloaded from the Mac App Store for $9.99. [Direct Link]

Such a great app.

Great to see my fav Mac Twitter app being updated, but was really hoping that by now Tapbots would have implemented a dark mode UI like they've done with the iOS version. Hopefully coming soon. Anyway, great app and cool to see so many bugs being ironed out.

Michaelgtrusa said:
Such a great app.
Click to expand...