Twelve South today expanded its HiRise lineup, launching a new stand designed to match the rose gold iPhone 6s and the iPhone 6s Plus. Twelve South's HiRise Deluxe stands for iPhone and iPad are some of its most popular products, and with the addition of the rose gold color, there's a finish to match every iOS device. 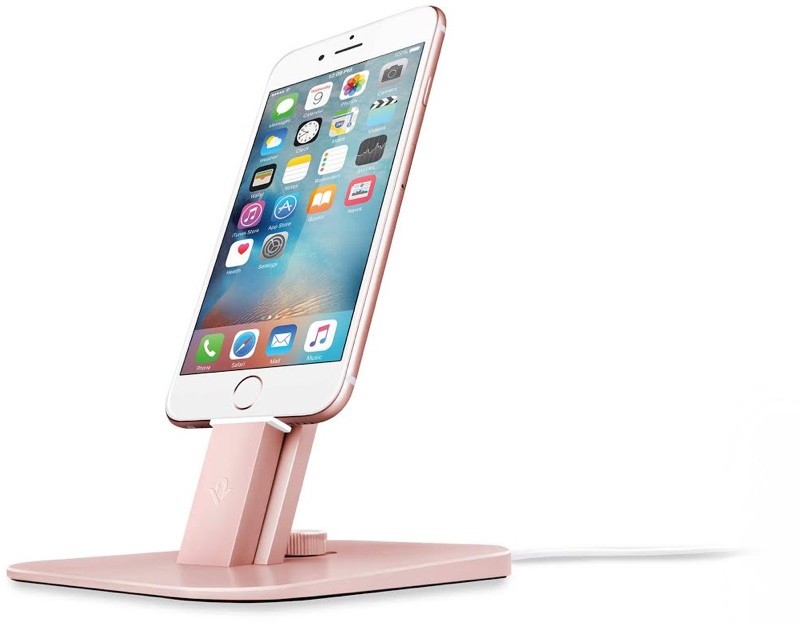 "There is something special about the new Rose Gold iPhone. It has captured the imagination of millions of people who want anything but basic black or standard silver when it comes to the iPhone they use everyday." said Andrew Green of Twelve South. "HiRise Deluxe is already the most functional and flexible stand available, but with a version that now perfectly matches the hue of our customers' Rose Gold iPhones, their experience will be complete."
Click to expand...

For those unfamiliar with the HiRise Deluxe, it's an angled aluminum pedestal that's designed to function as a stand for FaceTime sessions, video watching, and more, all while keeping an iPhone charged with a Lightning cable. The HiRise Deluxe ships with Lightning and micro-USB cables, and it's adjustable, so it's able to accommodate most iPhone cases.

According to Twelve South, when not in use charging an iPhone, the HiRise can also be used to charge the Siri Remote for the Apple TV, the Apple Pencil, the Magic Mouse, the SteelSeries Nimbus controller, and other Apple accessories that charge via Lightning.

The new HiRise Deluxe in Rose Gold is available from the Twelve South website for $59.99 starting today. It's also available in Silver, Black, and Gold.

A portrait stand. Perfect for video…

I too find it weird that they describe it as "a stand for FaceTime sessions, video watching, and more, all while keeping an iPhone charged with a Lightning cable."

I'd say it's a charging dock, not sure many people actually use their phone while it's on there. I certainly don't with mine.
Reactions: utsava

I have the previous version (before the "Deluxe"). I chose it specifically to have a stable, fixed, charging location that was raised a bit above the surrounding clutter. And it works well for this. It's also good interacting with Siri and for glancing at notifications. I've also used it as essentially a fixed-location Apple Music control panel. I have used it to charge the Siri Remote, just because it was there. Charging the Magic Mouse seems like it would be a huge pain, with the back support post getting in the way (don't have the mouse to try). I can imagine people using it for portrait-mode FaceTime. But watching video on it would just be silly. That bit is clearly the marketing department running on overdrive.

There's not something special about charging $59.99 for this. It's bad enough the plastic non-matching lightning dock was $30.