Image via TechCrunch​
​
The app, which will be optimized for El Capitan, will show interaction highlights within the OS X Notification Center, and it has a built-in dark mode for users who prefer a darker interface.

Twitter for Mac has never been a focal point for Twitter, and the app has often gone for months without updates and new feature additions. From June of 2011 to April of 2013 it received zero updates, and in 2014 and 2015, it's only been updated twice. With the revamped version, it's possible Twitter plans to invest more of its resources into the Mac app to allow it to better compete with third-party products like Tweetbot.

Twitter plans to release its updated Mac app in a few months, with no concrete launch date set at the current time.

It's about time. I never even bothered to download the Mac app because it wasn't updated to the point that the iOS app and the web version. Maybe now I will once this gets released.
Reactions: Glassed Silver and Archmage
Comment

It's about time. If they want to generate revenue through ads, they're gonna have to start making their native apps work well so people actually use them. Don't think it'll make me switch from Tweetbot on my iPhone or Mac though.
Reactions: orbital~debris
Comment
N

Why make an app for a web page? Does it do anything that twitter.com doesn't?
Comment

I complained about this yesterday on Twitter so I will take credit for it!

Until they add synched bookmarking between devices, I'll stick with Tweetbot. I seriously don't understand why that feature isn't a priority for Twitter. Why should I have to re-read old tweets just because I switch from Mac to phone, or phone to pad. Makes no sense.
Reactions: 3bs and Sandstorm
Comment
F

+1 for Tweetbot
I have no interest in a different client.
Reactions: orbital~debris
Comment
M

AndyUnderscoreR said:
Why make an app for a web page? Does it do anything that twitter.com doesn't?
Click to expand...

Without actually having access to their app, we don't know their app is better. Twitter simply can't build proper native apps.

Tweetbot is so much better;

1. It is very responsive with scrolling no matter how much tweets you go through, something that can't be done well in web browsers as it starts to get unstable the more data you load.
2. It can sync your timeline with TweetMarker or iCloud, so when you switch devices, you will see where you were at before.
3. Keyboard shortcut is easier in native apps, you can customize it and do things faster or automate with other apps.
4. You can have multiple columns instead of one column only on the website, I have 3-4 lists that is shown in columns next to my main timeline. (Tweetdeck does this too)
5. You can sign into multiple accounts.
Reactions: orbital~debris and pittpanthersfan
Comment

Finally. I've been using Twitter on the Mac for the past 4 years and have barely seen it updated over the years.
The Mac app was updated around once or twice (at most) a year and slowly became so unbearable to use I had to switch to using Tweetbot. It consumed a lot of RAM, lacked many of the updates Twitter have made over the years to their mobile and website applications and even started looking dated.

You'd never think that such a popular social network would neglect their Mac app whilst continuing to release updates every other week on their mobile apps and websites. Twitter have probably lost most of their Mac users to Tweetbot, it's too little too late.

EDIT: Looks like the app won't be released for a few months. LOL, just when you think they were getting somewhere.
Last edited: Oct 21, 2015
Reactions: orbital~debris
Comment
M

About time. The current Twitter app on Mac is pretty useless. You can't watch videos on it. Can't wait for this App to release.
Comment
C

I am really excited for this. It's about time
Comment
R

AndyUnderscoreR said:
Why make an app for a web page? Does it do anything that twitter.com doesn't?
Click to expand...

I have the app on my Mac and my iPhone. I never, ever use the website. The app is seriously way more efficient. It just loads the tweets, without any of the cruft and weight that comes along with the website.
Reactions: orbital~debris
Comment
P

Tapbots needs to pull a Taylor Swift and sue Twitter for ripping off their design.

Seriously, why does every flat design UI look the same nowadays? Zero creativity. Exhibit A: 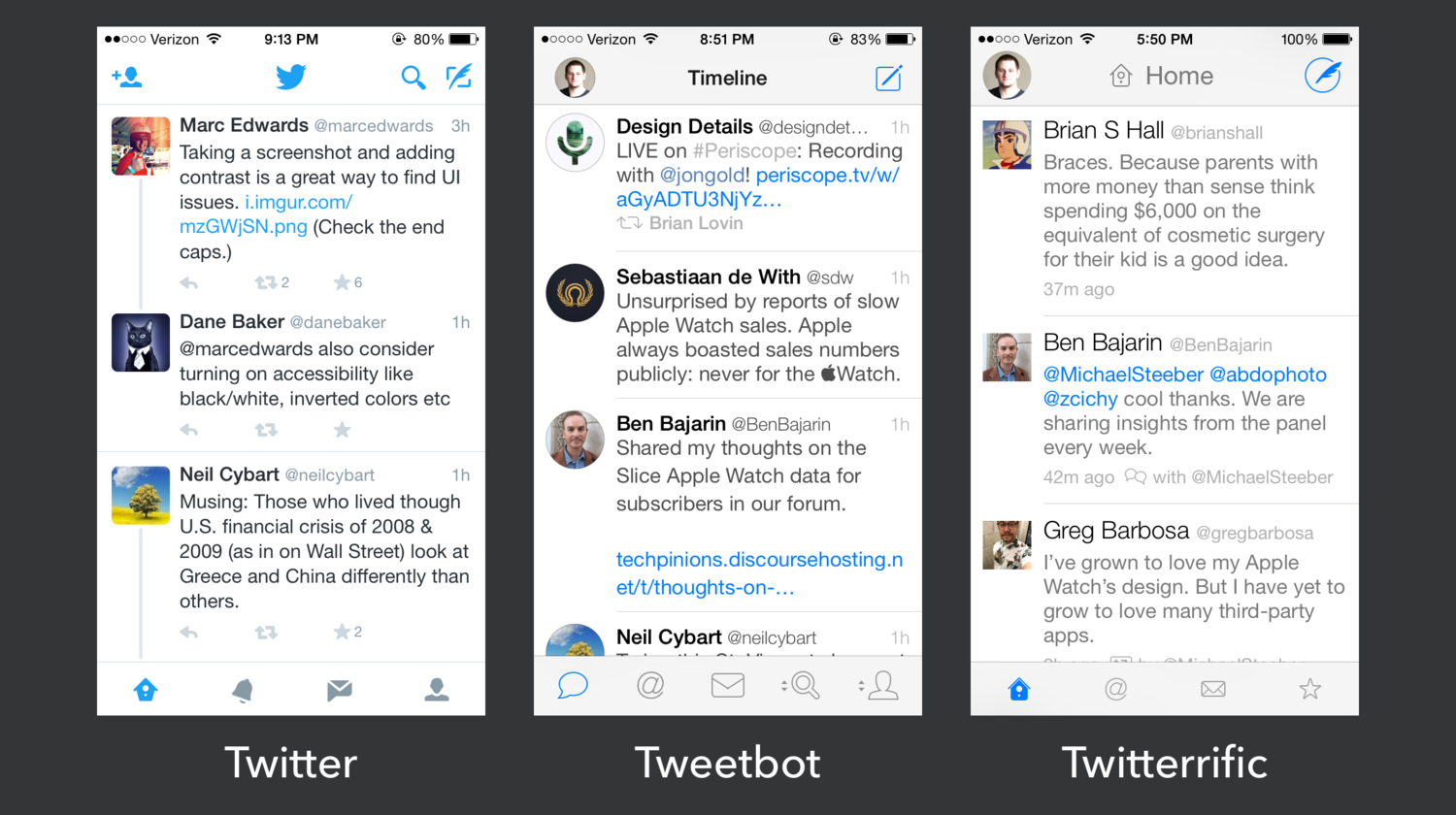 Paradoxally said:
Tapbots needs to pull a Taylor Swift and sue Twitter for ripping off their design.

Seriously, why does every flat design UI look the same nowadays? Zero creativity. Exhibit A:

Because they're all using the iOS template. I like it, makes things consistent.
Reactions: orbital~debris
Comment
P

xmichaelp said:
Because they're all using the iOS template. I like it, makes things consistent.
Click to expand...

I don't. There's just too much white and apps have no personality. You can still follow the guidelines and have uniqueness. Overcast (podcast app) is an example. Unfortunately, many apps are just too devoid of that nowadays.

People prefer the client than the web app, perhaps they see this now.
Comment

Paradoxally said:
Tapbots needs to pull a Taylor Swift and sue Twitter for ripping off their design.

Seriously, why does every flat design UI look the same nowadays? Zero creativity. Exhibit A:
Click to expand...

If it works, it works. It's pointless for every app the reinvent the wheel. I don't see that as a bad thing. If you know how to operate one app, you know how to use them all. Largely at least. It's the same on OS X where many apps look similar and always have.


Paradoxally said:
I don't. There's just too much white and apps have no personality.
Click to expand...