Twitter last night updated its iOS app to version 7.8 to patch a bug that prevented users from uploading photos in high resolution, but the same update also appears to have removed the company's companion Apple Watch app from the App Store. As noticed by users on Reddit and Twitter, after updating the Twitter app on iPhone the Apple Watch app has subsequently vanished, and Twitter has yet to comment on whether or not the app's removal is permanent.

On Apple Watch, Twitter users could view their timeline to browse recent Tweets made by people they follow, check out top trends, and Tweet directly from the Apple Watch using a voice-to-text feature. Now, any mention of Twitter offering an Apple Watch app has been removed from the app's page on the iOS App Store. 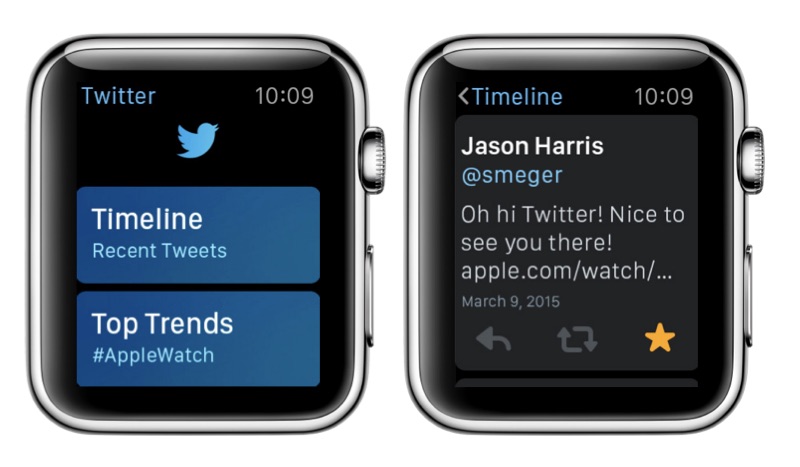 MacRumors forum members pointed out earlier this week that the Twitter app on Apple Watch began crashing and had trouble displaying the Twitter icon on notifications following the launch of watchOS 4. This means Twitter could be working on the app behind the scenes to get it up and running again for the new operating system on the Apple Watch, but it's also a possibility that the app is gone for good.

If it is, Twitter will fall in line with a series of high-profile Apple Watch apps that have pulled support for Apple's wearable device this year. Over the course of a few months in the first part of 2017, Google Maps, Amazon, and eBay all quietly removed their Apple Watch apps from the App Store without many people taking notice until May. Google and eBay said the move was to rework the apps and debut new versions later, which has yet to happen.

There are still some third-party Twitter clients with Apple Watch support, including Tweetbot and Twitterific. If Twitter comments on the removal of its Apple Watch app, we'll update this article.

Update: Twitter provided a statement to TechCrunch, although the social network company avoided commenting specifically about the Apple Watch app and its removal from the App Store.

"We heard from people that notifications were the most helpful part of the Apple Watch Twitter experience. With this, we are focusing on supporting more robust, media-rich notifications. We are committed to providing the very best Twitter experience on iPhone, iPad, Apple TV and Apple Watch, and we'll continue to iterate and improve our apps across all platforms," said Dan Jackson, a Twitter spokesperson.
Click to expand...

With a faster processor and independent network connectivity, third-party apps are just beginning to make sense. Would be a pity if this trend continues.
Reactions: richhh, ralphdaily, MonstaMash and 1 other person
B

Not surprising as it's still just a fitness band that shows you push notifications. The series 3 could change that now that connectivity is easier with LTE but I worry the hassle isn't worth it for most developers. You can only create and update so many versions of an app. Remember how we all criticized Android and its fragmentation, well this is comparable.
Reactions: Kashifnawaz85 and Applebot1
V

now how else will i be able to get trumps tweets while working out without my phone
Reactions: ZebraDude, B60boy, wolfshades and 1 other person
S

Its going to take a while to figure out what should and shouldn't be in this market, but waiting till the market is obviously turning for the Apple Watch (Series 2 was really the turn) and then they pull their app seems like missing the surge. Its their app though.
Reactions: GrumpyMom

So the Twitter app is no longer available for Apple Watch?
Sounds like an improvement to me!
Reactions: Doodah7

I honestly don't get why people do this. Developing for the watch is actually rather interesting and its not some horribly difficult thing to do.

Sure there are some special considerations to take but its a lot simpler than the phone. Even the layout on the watch is done for you for the most part.
Reactions: midkay

Twitter is one of the 5 3rd party apps that I use. I just turned off auto-update since my twitter is still there.
Reactions: SamGabbay, ralphdaily, jhfenton and 2 others

Wow. Twitter couldn’t have tested it with os 4 BEFORE it was released? Some lazy ass devs they have there.
N

WarHeadz said:
Wow. Twitter couldn’t have tested it with os 4 BEFORE it was released? Some lazy ass devs they have there.
Click to expand...

I would move that its probably some pennywise and poundfoolish managers / executives who made this choice, now - when the market is obviously growing quite well - that was the cause. Probably called off months ago.

Guessing the devs liked working on the new platform and had no choice in the matter (in a corporate environment that's normally how it is).
Reactions: WarHeadz

Twitter was one of my most used apps on Apple Watch. Scrolling through the timeline worked really well with the digital crown. Hopefully they pulled it for watchOS 4 revisions (my app was crashing too after the update).

If the report of it crashing are true, then that points to lazy devs who didn’t work on watchOS 4 compatibility.

They’ve been having other Apple Watch gremlins, like blank icon — and Apple Watch support documents still exist through Twitter support (promising). So hopefully it’s temp pulled to roll out update that works over LTE / away from iPhone.

The legacy app was still watchOS 1 compiled, and especially with more users trying to access away from iPhone w/ Series 3 — they couldn’t and a swarm of complaints.

I hope they roll out a revamped version with Scribble compatibility.

macTW said:
If the report of it crashing are true, then that points to lazy devs who didn’t work on watchOS 4 compatibility.
Click to expand...

I don't know about before, but I got my Series 3 on Friday, and never was able to get the app to run on it. It would show the "Timeline" and "Top threads" button, like on the image in the article, but clicking either would just make the app crash.
More or less the same with Facebook's Messenger app. I just get and endless loading wheel, and nothing ever happens. Tried to uninstall and reinstall the app. No luck.

The premature release of the first Apple Watch really hurt the platform as a whole. The current Series 3 Apple Watch is the first one I think is really fast enough and with an excellent battery life to support an app platform, but most developers have left already. That's a pity.

My watch twitter app is still there since I don't auto update, but it crashes every time I open it, so I guess it won't make a difference to update
R

My Apple Watch twitter app on my Nike series 2 just crashes anyway. I haven’t update the app on my phone yet.

Same day they increase their characters to 280?
J

Good luck paying $10 a month of data for almost nothing.
Reactions: richhh

Huh I was just thinking my Watch Series 0 was glitching, glad to know it’s Twitter at fault(I wasn’t a big user of the app anyway, apps are way too slow on S0)