Twitter recently began rolling out a new live-streaming Periscope button into its iOS app, letting users initiate a real-time broadcast from Twitter's first party app without having to jump into the company's year-old live-streaming video service Periscope. If a user doesn't have Periscope downloaded, the app will nudge them towards its location on the App Store.

The new "Go Live" button can be found when composing a Tweet, sitting to the right of the Photo and Video media options. The company began testing the feature on Android back in May, but confirmed to BuzzFeed yesterday that a "small group" of iOS users would begin to see the button this week. Of course, the long-term plan and launch window were kept secret.

A rep for Twitter told BuzzFeed News, "a few weeks ago we rolled out a 'Go Live' button in Twitter to a small percentage of Android users. We're beginning to roll this out to a small group of iOS users. Over time, everyone will have the ability to start a Periscope broadcast from Twitter."
Click to expand...

Periscope launched in March of 2015, on the heels of similar live-stream service Meerkat. Since then, Facebook has shifted a lot of its focus into the live video space, updating its mainline app with a live video-heavy "Discovery" tab and discussing its plans for the future during the company's F8 Developer Conference in April. A rumored standalone camera and live video app is said to be in the works at Facebook, as well.

Screenshot is missing an arrow.
Reactions: earthTOmitchel, Porco, sudo1996 and 14 others

This is pretty cool.

My ones broken it's missing the arrows! Haha 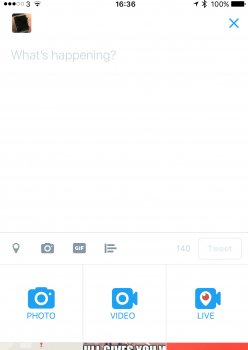 What a great time to be alive....!
Reactions: jacklink01, CarpalMac, jdillings and 1 other person

If it's being trialled with a small group of users, then it's not very well targeted as its appeared in my Twittter app & I rarely post photos, never mind video.
C

Just phoned my stockbroker and shouted "I'm IN!!".

Twitter shares are gonna rocket like one of them arrows when this baby hits primetime.
Reactions: jdillings

If only they'd put all the buttons in a drop-down menu like Apple did in iTunes 12.4, it could have taken twice as many arrows to explain. Missed opportunity.