Uber, Lyft, and Zipcar Launch Election Day Promos to Help Voters Get to the Polls

Ahead of Election Day in the United States tomorrow, November 8, a collection of popular iOS and Android ride-hailing apps have launched promos for customers to more easily make it to their polling location before the 8PM deadline (via BuzzFeed). As the biggest ride-hailing app in the U.S., Uber [Direct Link] recently announced that starting tomorrow an action sheet will pop up when users launch the app, reminding them to vote.

Through a partnership with Google, the prompt will also include a way for users to find their polling place, add it as a destination, and use Uber to make it to the polls. Uber said that the small update was implemented because the company wants "to make getting to and from your polling place easier than ever." As a blanket rule, polls open 6AM and close at 8PM. 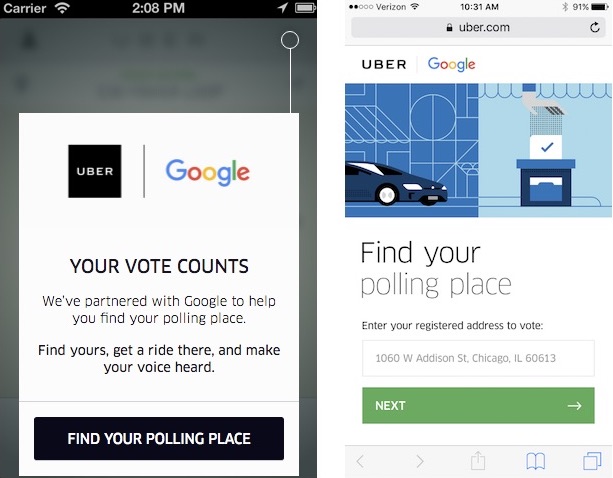 Let Uber and Google help you get out to vote. As part of our ongoing campaign to encourage users to vote, Uber is teaming up with Google to launch a special in-app feature on November 8th that will help you locate your polling location and then seamlessly request a ride with just a push of a button.

Given the important decision people around the country will make on November 8th, we wanted to make getting to and from your polling place easier than ever. Teaming up with Google, Uber is excited to help make that trip as convenient and stress free as possible.
Click to expand...

Another popular taxiing app, Lyft [Direct Link], is angling its Election Day promotion as more of a money-saver for its customers (via The Verge). In twenty select markets, Lyft riders will be able to get a 45 percent discount on one ride between 7AM and 8PM tomorrow, although the return trip does not receive a similar discount.

Lyft's promotion is limited to the following cities: Atlanta, Baltimore, Boston, Charlotte, Chicago, Dallas, Denver, Detroit, Miami, Minneapolis-St. Paul, Nashville, New Orleans, New York City and New Jersey, Orange County, Philadelphia, Phoenix, Portland, Raleigh, San Diego, and Washington. Eligible customers in these cities can check their inbox for a promotional email from Lyft and take advantage of the 45 percent discount in the Deals of the Week section of the app.

Car-sharing company Zipcar [Direct Link] is offering 7,000 of its vehicles completely free of charge on Election Day to customers riding to the polls. Of course, limitations apply, including the fact that a free Zipcar can only be taken between the limiting, last-minute window of 6PM and 10PM on the night of November 8. Users can reserve a Zipcar now, although supplies of the 7,000 rides available are likely to be limited.

If voting actually mattered, they wouldn't let you do it.
Reactions: tomnavratil and Bubba Satori

miniyou64 said:
If voting actually mattered, they wouldn't let you do it.
Click to expand...

Right now it's like choosing between Nero and Caligula.
What could go wrong?
Reactions: Snoopy4, Biscuit411, ucfgrad93 and 1 other person

Congress has the real power, not the Executive, Congress can override any veto and thus pass any law that is Constitutional. The Executive can only carry out the laws passed by Congress.

Good on ya folks..keep this up and I'll have to rethink my position on tech companies

lowendlinux said:
Good on ya folks..keep this up and I'll have to rethink my position on tech companies
Click to expand...

You're on a tech-centric forum...

Good for them, no matter who one supports or doesn't, we should all be exercising our right to vote. Many people have fought and died to give us this privilege.
Reactions: Keane16 and ucfgrad93

juanm said:
You're on a tech-centric forum...
Click to expand...

Did you take a glance at my username?

miniyou64 said:
If voting actually mattered, they wouldn't let you do it.
Click to expand...

Voting does make a difference and life has improved dramatically over the past two centuries.

Eraserhead said:
Voting does make a difference and life has improved dramatically over the past two centuries.
Click to expand...

Dramatically improving standards of living have nothing to do with pretending to choose a ruler every 4 years.

miniyou64 said:
Dramatically improving standards of living have nothing to do with pretending to choose a ruler every 4 years.
Click to expand...