Unable to sync/backup iPad 4 on iOS 6

Yesterday I read BigBoss announced it would be a good time to upgrade my iPad 4 (which is still running the original iOS 6.0.1) to iOS 7.0.4 because when Apple releases iOS 7.1, I might not be able to update to a jailbroken iOS 7.x at all... (because Apple stops signing 7.0.4 then)

Since I bought my iPad back in July 2013, I have never been able to backup it or sync it with iTunes on my Mac. When I plug it in, iTunes seems to start syncing the device, but then it gets stuck at "Backing up"

It stays there for about one minute, and then the following error comes up:

But, when I open iTunes -> Preferences -> Devices (from the status bar), it does seem like it created a backup entry for my device, although this cannot be possible, because the 'backup' process took about 10 seconds and then gave me an error... 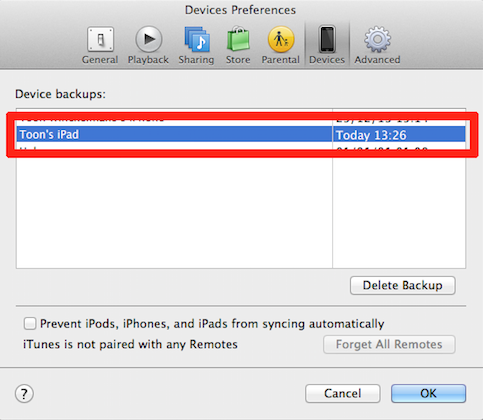 I thought this issue might be caused by a jailbreak tweak on my iPad, so here's a list of the tweaks I have installed:

So yeah, this might seem like quite a list, and probably not all apps will be compatible with iOS 7 (yet), but I'd really like to keep most of these, so I am gonna give PkgBackup a try after I fix this syncing issue...

Any help is very much appreciated! Thanks in advance
N

Can you sync in safe mode (or pre-safe mode; boot while holding volume up)?
Is it set to sync over wifi?
C

I can't help with the backup issues but I got an iPad 4 on iOS 7 and all I can advise is to stick with iOS 6, in your case 6.01. The iPad 4 is noticeable slower now. Choppy scrolling, 4-Finger-Pinch to close is buggy. iOS 7.04 is not a good version if you can't upgrade (nor downgrade) which is most probably what will happen for jailbreak users.

In my opinion, your best option would be to do a backup to iCloud and do a restore as new from either Recovery Mode or DFU Mode. Many tweaks have not been updated to support iOS 7 or newer underlying frameworks like the newest Mobile Substrate. If you tried to restore that backup you may very well end up having vast amounts of issues. So do the iCloud Backup, restore to iOS 7, restore backup from iCloud, and then reload all jailbreak software.
You must log in or register to reply here.
Share:
Facebook Twitter Reddit Email Share Link
Register on MacRumors! This sidebar will go away, and you'll see fewer ads.
Sign Up
Top Bottom