When I occasionally feel stranded by running (allegedly) obsolete hardware, I like to keep things in perspective by looking back on things like this....
Cubase VST 4, note the specs - 64 tracks of audio, unlimited MIDI tracks, 4 effects per channel.....and then note the system requirements:
Minimum 120Mhz processor but a G3 at 300 Mhz "would be very cool" 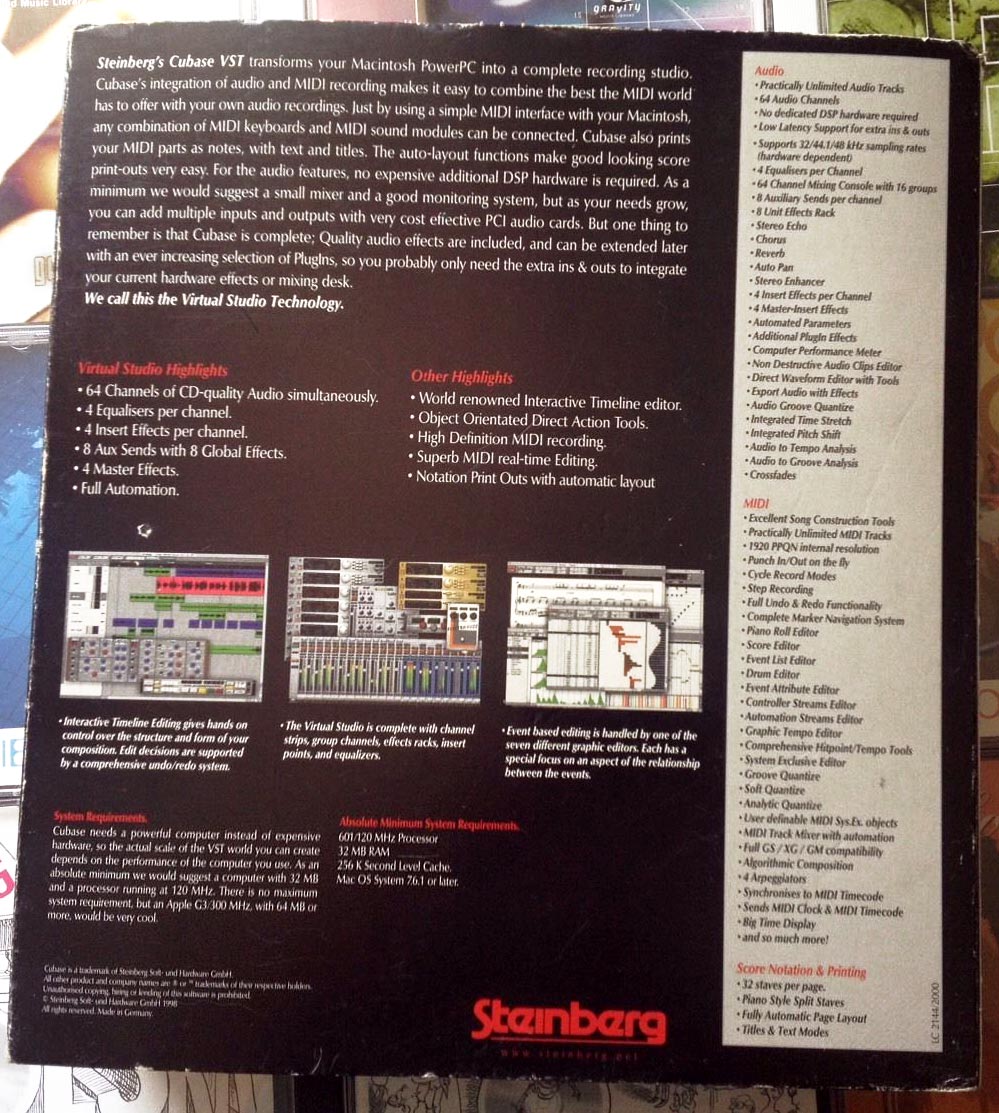 I love the wording on those requirements. It is almost comical how a 300 MHz G3 "would be very cool" and could do so much audio but is considered useless today.
Comment

4 was OK, but as I recall 4.1 was a fantastic release. I'm pretty sure 4.1 was the one where they introduced virtual instruments. I think you could even use auto tune on that release as an add on effect. Not much has gotten a whole lot better since then, honestly.
Comment

BigRed1 said:
Not much has gotten a whole lot better since then, honestly.
Click to expand...

I think people tend to get trapped in the upgrade cycle and convince themselves they could make better music...if only they had the latest software and hardware...
Comment

Dronecatcher said:
I think people tend to get trapped in the upgrade cycle and convince themselves they could make better music...if only they had the latest software and hardware...
Click to expand...

I'm not in the music industry but your viewpoint I think is applicable to a lot of things.

I used to hold this view when it came to design software and OS. During the OS9 era (at work) that was pretty much doable as releases came fairly quickly and the company I worked for was frequent enough in upgrades.

But eventually I got so far out on the bleeding edge that there were a few times I was unsure if any work would make deadline because the Mac was non-functional. I learned a big lesson in that being that far out ahead of the curve wasn't so good.

When I first got the job I have now we were on PC using Pagemaker. Technically, I could have left everything alone and still functioned. I didn't, but neither did I get that far out ahead either. The economics of the business prevents that in any case so I've also learned to make do with what I do have.

A PDF is a PDF and as long as it's generated correctly it doesn't MATTER which app made it, nor which version.
Reactions: Dronecatcher
Comment

eyoungren said:
A PDF is a PDF and as long as it's generated correctly it doesn't MATTER which app made it, nor which version.
Click to expand...

Agreed. I've been 'stuck' in Adobe CS3 for years - for print media I see absolutely no reason to go higher.
But now that so much of a designer's work is beginning to focus on digital content, the upgrade path will ever continue onwards as the online world becomes more and more thirsty for newer hardware.
Reactions: eyoungren
Comment
You must log in or register to reply here.
Share:
Facebook Twitter Reddit Email Share Link
Register on MacRumors! This sidebar will go away, and you'll see fewer ads.
Sign Up
Top Bottom