Imangi Studios' hit game Temple Run 2 has been updated to include Olympic sprinter Usain Bolt as a playable character.

As expected, the character comes equipped with Bolt's signature yellow and green outfit along with unique talents like a coin-magnet speed-boost hybrid power up. Bolt spoke to USA Today about his appearance in the game, which he says that he plays while traveling. 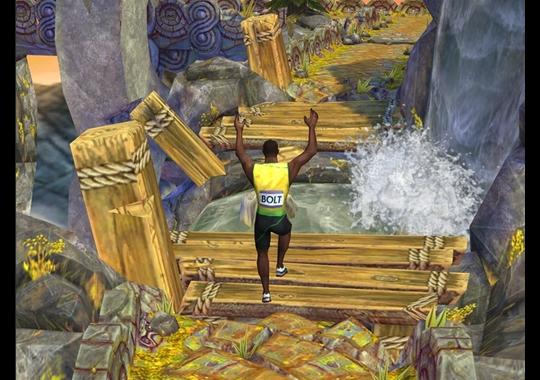 To see himself actually in the game, "is fun and a little crazy," says Bolt, interviewed via email. "People always tweeted at me and told me what a great fit my character would be in Temple Run, so finally seeing myself in the game is epic."
Click to expand...

Temple Run 2 is Imangi's follow up to the original Temple Run game, which was first released in 2011. Temple Run 2 launched early this year, offering enhanced graphics, smoother gameplay, new power ups, and new environments. The free game was an instant hit, with more than 50 million downloads within two weeks.

The partnership between Bolt and Imangi came about after the studio contacted him about being a character in the game. According to Bolt, he responded, "Make it happen ASAP!"

Temple Run 2 can be downloaded from the App Store for free, though the Usain Bolt character will require a $0.99 in-app purchase. [Direct Link]

I got the update to the app but don't see it as an option in the game..am I the only one? I prolly wouldn't pay for it anyway but I hate when things don't work the way they are supposed to.
Comment

I bet Riley Cooper and Paula Deen won't be using this character.
Comment

FYI, the yellow and green are the national colors of Jamaica, not Bolt's "signature" outfit. All athletes who compete for Jamaica wear those colors.
Comment
T

oregon.trader said:
FYI, the yellow and green are the national colors of Jamaica, not Bolt's "signature" outfit. All athletes who compete for Jamaica wear those colors.
Click to expand...

Good times. Instabuy, especially as the game didn't cost me anything itself! A fun real life tie-in, maybe it'll start a trend . Cool response to being asked about it, proper celebrity.
Comment

Do the power ups include "testosterone injection" and "human growth hormone?"

(just a sports joke, not maligning Usain)
Comment
I

With Usain Bolt, does that mean you can plow through the levels in record time?
Comment
A

this is gonna be awesome, cant wait to play!
Comment
G

iMikeT said:
With Usain Bolt, does that mean you can plow through the levels in record time?
Click to expand...

Since temple run is just one endless level, no.
Comment

Buying him should allow you to play "turbo mode", where it goes at 10x the speed (More like 2-3x)
Comment

ghettochris said:
Since temple run is just one endless level, no.
Click to expand...

Not with Usain Bolt. He finishes endless levels!
Comment

whooleytoo said:
Not with Usain Bolt. He finishes endless levels!
Click to expand...

Now we need a Soviet Russian character so that the endless levels finish him!
Comment
E