I have been copying my music from a USB 500GB HDD (out of my old laptop in a USB powered caddy) to my MBP, and then from the MBP to a 256GB Pendrive.
I didn't verify that the files had copied to the MBP correctly, I just assume they had as I played some of them.
I then copied from the MBP to the Pendrive.
I then deleted the copy on the MacBook.
I have been looking at some of the folders on the Pendrive and the MP3s in some of them literally disappeared in front of my eyes, as though they were getting deleted. Also some of the folders that I know definitely were full of MP3s are now empty!.
I think it might be a faulty Pendrive, so I tried to verify it using the Disk Utility.
After about 10 seconds I got the message "Error: Live file system repair is not supported" As in the picture below :- 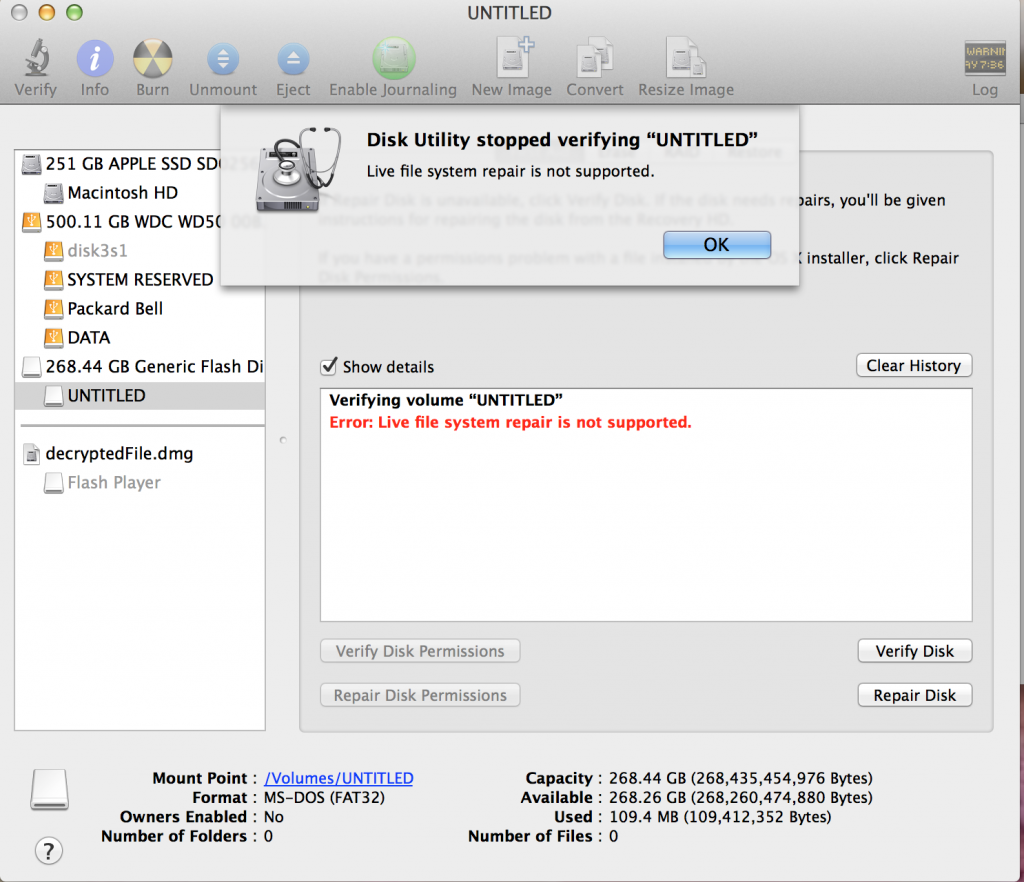 Does that mean the Pendrive is faulty or is it that it may have been being indexed at the time?
What could cause the files to "disappear"?

My wife just came up with a suggestion....
Could it it be anything to do with apple not liking MP3s?

I have a sneaky feeling that you have a corrupt, dodgy pen drive... Apple has no problem with MP3s!
Comment
S

256 GB Generic Flash Drive...let me guess, purchased for cheap on fleBay from a seller in China?
Comment

I also notice that it is the folders that ONLY contain MP3s that are being emptied.
If there is artwork in them they are still visible.
I now don't think it's the pen drive because it is showing the folders on the USB HDD as empty, but when I connect it to a Windows laptop everything is there!.
As a work around I have decided to do the copying with the Windows laptop.

Barney63 said:
...
I now don't think it's the pen drive because it is showing the folders on the USB HDD as empty, but when I connect it to a Windows laptop everything is there!.
As a work around I have decided to do the copying with the Windows laptop.
...
Click to expand...

Another tip - your pen drive is in what I call a Windows format (Fat32), and checking the file system on a Windows laptop might be your better choice. You can go into Programs/System tools, and verify your pen drive with the disk tools. I don't recall exactly what Windows called those tools, but I'm sure someone here will respond with a good answer.
Comment

It looks like it is the pen drive.
I have been using it in a Windows laptop and after transferring about 150GB to it the same thing happened.
It wasn't particularly cheap and it was a UK seller on eBay, he is sending me out a replacement.