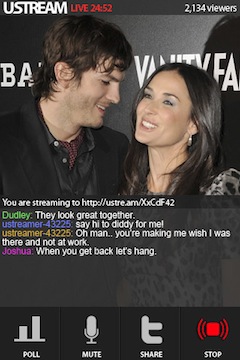 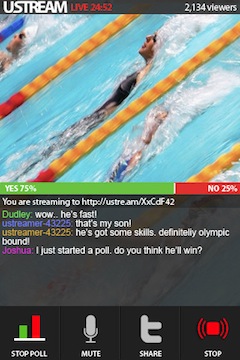 While one of the key features of the iPhone 3GS was video recording capabilities, that was limited to recordings that were captured on your device and could be uploaded to the web after they were done recording. With the Ustream Live Broadcaster, you can easily record videos right to the web, and allow others to watch them as they're being recorded. These videos can also be archived so that people can watch them later, if they choose.
Click to expand...

The debut of Ustream Live Broadcasting marks the second approval of a video streaming application for the iPhone in recent days, following Apple CEO Steve Jobs' apparent personal involvement in the approval of Knocking Live Video. Knocking, however, offers only iPhone-to-iPhone one-on-one streaming, while Ustream supports streaming to the Internet for multiple viewers.

Ustream is no stranger to the App Store, having debuted an application for viewing Ustream videos early this year.

Wow, this could be really interesting..

Better yet: it's available in countries outside of the US, so that's a big plus!

Downloading it right now..
I

I think I see ichatAV coming to iPhone next generation in June/July then. Plus old news about camera patent behind display

Allowed over 3G? How in the world did that slip by AT&T??? Better get the app now before it gets shut down.

If streaming FROM the iPhone is now kosher, I would assume that streaming TO the iPhone will be next. I still haven't updated from the original version of my EyeTV app because of the apparent restriction.
1

well it's only a matter of time before Qik shows up with a version that allows streaming too... (i prefer Qik->Livestream over Ustream.TV anyway)

the best news is that this works with a 3G or 3GS too.
P

Just for the record, no other application could do this because the 3.1 iPhone OS doesn't provide any public APIs for accessing the raw video feed....

If this app is "special" then that's one thing... but if it just got approved despite using "illegal" APIs on the iPhone for no reason, it's just annoying to everyone else developing out there.

Lots of apps that use the camera preview are in this category... Technically you are not allowed to do it and you get rejected from the app store... but some slip through because Apple has such a shoddy and inconsistent review process.

Fring can do this too and had been able to for a while now! Please wrote a story about this it is another app that can, there aren't just two!!!

Just finished playing with it and it is nice. It allows you to record Local, to your iPhone or remote to ustream servers. You can broadcast live, it has audio, the video is a little choppy but still decent. The URL you are streaming to is on your screen so you can give it to others. This App is about to change the game, I can see people streaming from all kinds of events and if the arena has free wifi it will make it all the more better.

This app is awesome!!!

Does this require 3G?

can this work ipone to iphone ?

wow! that is VERY interesting! One more reason to get an iPhone. Now, just lower the price of the monthly plan and I will be there in a jiffy!

tried it for a few minutes but buggy. froze up on one page, when trying to create show got a error message. might have been rushed out

Pretty nice. Does it stream the audio too? I can't test that here at work.

Good. This is going to change a lot of things. If you are recording somebody doing something wrong (such as a police officer beating and innocent old lady) or a criminal robbing a store, and that person runs up and grabs your phone from you, it will already have been streamed live onto the web and (Youtube?). Does anyone know if it uploads to Youtube in real time? If an Iranian protester is filming the government abusing it's powers and they grab his phone from him, will the video already be on Youtube?


zombitronic said:
If streaming FROM the iPhone is now kosher, I would assume that streaming TO the iPhone will be next. I still haven't updated from the original version of my EyeTV app because of the apparent restriction.
Click to expand...

Not necessarily. When you allow people to downstream, they will spend much, much more time watching video clips (think about television shows and Youtube - we already have Youtube). But when people can upload only, they won't be sitting there for an hour straight watching television and Youtube. There's a big difference.

DisturbedLen said:
Pretty nice. Does it stream the audio too? I can't test that here at work.
Click to expand...

pavelbure said:
can this work ipone to iphone ?
Click to expand...

Yup - you download ustream's viewer app to watch the video.
U

How do you find the streams? The search button does not search all shows. Its crap.

Wow, this works on the 3G  and allows you to record video directly to the phone  upload it, just like you would on the 3GS!

Not just streaming video, but saving it as well!

What I find amazing is that it took me a few seconds to download the app, register on the Ustream site and "broadcast" my first stream.

Next someone will need to create an iPhone tripod for Ustream iPhone broadcasters! (Not to mention lighting and boom microphones. Also, a director's chair for the truly egotistical.)

Question: the view app has some of the worst reviews I've seen -- complaints of crashing, no search function, etc. Is anyone using it? And liking it?
R

Alright, great...the broadcaster app works but the viewer app still doesn't allow you to see your live feed because of the search restriction. Ustream, I hope you update this. I remember when the view app first came out and all streams were still searchable.
A

Hopefully not a stupid question, but is there anyway of getting locally saved video off of the iPhone (3G - not S) apart from uploading it?

I used it, and for a second, it recorded my iPhone screen. Could this be a way to record vids of your iPhone, instead of those crappy handheld videos of demos?
You must log in or register to reply here.
Share:
Facebook Twitter Reddit Email Share Link
Register on MacRumors! This sidebar will go away, and you'll see fewer ads.
Sign Up
Top Bottom