[center][img]http://images.macrumor...ar11_impression_share_500.jpg[/img][/center] ​
Mobile advertising firm Millennial Media today announced that release of its March 2011 "Mobile Mix" report, revealing that Apple's iOS has benefited from the launch of the Verizon iPhone, with its share of the smartphone/connected device operating system market for ad impressions growing by 11% to 31%. iOS continues to trail Android's 48% share, but Android's share has been falling for the last several months after having risen to over 50% of the market.

According to the report, the Verizon iPhone accounted for 8.2% of all iPhone ad impressions during the month as iOS impressions grew by 29% compared to 23% for Android. 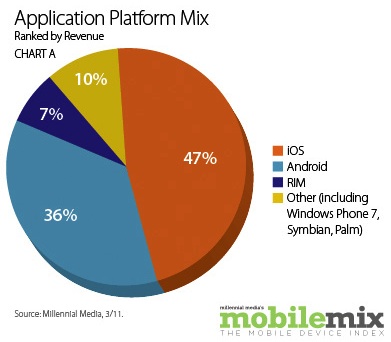 When it comes to revenue generated by application platform, iOS holds the top spot at 47%, well ahead of second-place Android at 36%. The success of iOS has been driven in large part by the iPad, which saw its revenue double month-over-month based on increased sales and adoption of Millennial's platform.

I wonder if the higher ad impression rates are any indication that iOS users spend more time in apps than Android users, or just indicative of higher growth rates of iOS?

But the Android fanboys on a forum told me that Apple finally releasing the iPhone on Verizon wasn't going to have any affects??? How could this be??? lol.
Comment
M

Actually, will iOS also feature the private mode that "instructs" advertisers to not track it?
Comment

Will iOS also feature the private mode that "instructs" advertisers to not track it?
Click to expand...

You already are prompted to give the app the ability to track your location, and Apple is forcing publishers to display opt in/out prompts.
Comment

Seriously, you'd begin to believe that the analysts and writers have nothing else to do, so they come out with this dribble.
Comment

I'm actually beginning to believe the delayed iPhone 5 rumors. It seems like the white iPhone plus the verizon iPhone is good enough to be considered an iPhone 4.5 launch for Apple. It's hard to imagine them saying no to millions of people ready to hand them hundreds of dollars for the iphone 5, but when production capacity may be in direct conflict with the iPad 2, I guess it starts to make a little sense.
Comment
T

tomcattmatt said:
I bet 1/2 of Android Impressions are from the free version of Angry Birds
Click to expand...

Exactly, and that they accidentally press it during game play.
Comment

Give it time. By next year when the LTE iPhone comes out, it's all over for AT&T.
Comment

newagemac said:
But the Android fanboys on a forum told me that Apple finally releasing the iPhone on Verizon wasn't going to have any affects??? How could this be??? lol.
Click to expand...

Yeah, the reduction in ad impressions over iphone impressions sort of indicates that the iPhone is back on the rise over Android.

Also, from what I understand, Android Apps are more Ad prone too given that that's how Google makes it money with the OS.
Comment

For most advertisers, the iOS consumers are a much more attractive demographic then the android users. This is why you are seeing a significantly higher cpc on ads on iOS devices.
Comment

Exactly what I was thinking. I'm not sure what to make of any of this given that there are more ad-supported apps on Android than on iOS.
Comment

It kind of blows out of the water the theory that Android with more phones is a more attractive development platform.

I mean Ad supported apps are making more money on iOS. Plus iOS has a strong paid app market that most cross platform developers have noted has been hard to translate to Android or indeed other platforms.

With these numbers Android would need 3-4 times market share to make it the more attractive platform. Or a Single device with a solid marketshare in it own right.
Comment
J

All this means is that this particular ad platform gains more revenue on iOS.

It's fair to say that iOS users are more inclined to pay, which means relatively less demand for this platform, which skews the numbers towards android.

Also, iOS has iAds which also take a small piece of the pie. Maybe Admob is relatively more popular on iOS or maybe it's more popular on android, which again would skew numbers in either direction.

Basically you can't deduce anything from these numbers
Comment

newagemac said:
But the Android fanboys on a forum told me that Apple finally releasing the iPhone on Verizon wasn't going to have any affects??? How could this be??? lol.
Click to expand...

Actually, it was the countless iPhone fanboys on this forum that said that the iPhone would never go to Verizon. The technologically ignorant and too young to remember claimed that it was impossible for Apple to but a CDMA antenna into the iPhone.

Then even more fanboy FUD came out about how a Verizon iPhone would never outsell AT&T . . . .

So I guess these same people will just claim that it was "them over there" that made these statements even though for YEARS it was the iPhone camp making those claims.

Or we can just keep things on topic instead of putting our feet in our mouths.

Back on Topic:
This is of course going to happen when you put one of the best selling phones on the largest 3G network. Analysts really need to see what happens when the iPhone 5 (both white and black models) are released. I hope that it does finally have LTE like some of the new HTC phones do.
Comment