Music video hosting service Vevo today introduced a revamped Apple TV app that has been fully redesigned with a simpler interface that's easier to navigate and a new focus on personalization and curation, both of which Vevo hopes will draw in more users.

Vevo's new design brings videos and playlists front and center, with the aim of providing an immersive video watching experience as soon as the app is opened. 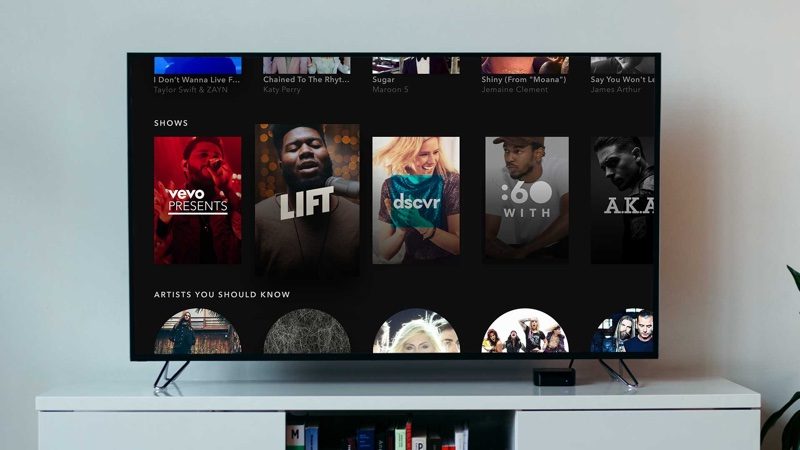 A new "peek-inside-playlist" feature lets users browse through content while listening to playlists, artist stations, or videos, and as the app is used, it will learn more about each user, offering up personalized content that can then be further customized by adding videos to a playlist or favorites section.

Users can choose from a variety of curated artist stations that match tastes and moods, and there's programming curated by an in-house editorial team that's designed for different times of the day, big events, and holidays. All playlist content is also localized by genre and market, and there's a genres section for browsing top videos, trending artists, and most recent playlists in each genre.

"Music videos became a cultural phenomenon through the power and reach of television over the last thirty years," said Erik Huggers, CEO, Vevo. "In recent years, this platform has lacked the rich and immersive experience that a new generation of viewers demand from their connected devices. With Vevo for tvOS, we've created an environment that allows the music video to shine once again on the big screen, with an intuitive user interface and new levels of personalization and control."
Click to expand...

The new Vevo Apple TV app will be available starting on Friday, May 19.

VEVO's AppleTV app has some of the best TV UI concepts. Just touching the remote brings up a heads up display allowing you to then slightly move your finger to the action you want and physically press to enable it. It's very responsive and intuitive. I think that Apple should adopt it for tvOS' native playback UI.

It seems, through the lack of comments ... barely anyone cares. Doesn't bode well for their redesign intention.

I did enjoy the previous interface when I installed the app on my Apple TV, but honestly I haven't used the app since. I might check out the redesign, but I doubt that would be enough to interest me in using the app more often. I think the ability to view the same Vevo videos through YouTube is part of the reason that I and others won't directly use the Vevo app.

Perhaps, few are interested in only music videos, even if it's essentially Pandora for music videos now. If Vevo enables people to consume other types of video content, or even exclusive content, that could be a driver.

prasand said:
I might check out the redesign, but I doubt that would be enough to interest me in using the app more often.
Click to expand...

Ended up checking out the app, and though I think there are a few design tweaks that should be done, it has kept my attention for the past 12 hours or so. Even let a playlist rock while I fell asleep.

I believe that is longer than I used the app before, so the change is effective. But it's possible that once I cease to be interested in catching up on videos, I might lose interest in the app again, as I go back to consuming other content.

I think a couple of real changes (outside of the app name, wtf, seriously, the app is now named "VevoAppleTV"?) would make the app more of a joy to use. Where before the navigation was innovative it is now cumbersome. Where one would expect fast-forwarding to occur, the track instead skips to the next, with no visual indication of how to seek or rewind (one has to pause first, to be able to see the seek bar, and then rewind, but that isn't intuitive). If they are not going to give a innovative navigation, they need to give standard seeking and skipping gestures or it becomes difficult to use and would turn off many. Swiping up to show the bottom tray, is finicky and doesn't always work, so that needs to be taken care of (that and the playlist add feature seems to trigger randomly unintended). That's pretty much it.

Enhancement wise, if they add captions / lyrics then there's real incentive on why some would use the Vevo app over YouTube. That and some real Pandora like functionality. As it is, playlists seem curated which is cool, but being able to generate playlists on the fly, will cause many to play an artist / track (station) and let it just rock for awhile. If they can add those things, I think many would stick to it.

Personally, I'm not the type to watch music videos that often (even on YouTube it's a rare occurrence for me) so it wouldn't keep me per se ... but it would cause me to come back occasionally. The addition of other types of music related content might also still help (for example, artist news clips). But there's the licensing or original content creation hurdle.