Video Stream of 'Back to the Mac' Media Event Now Available 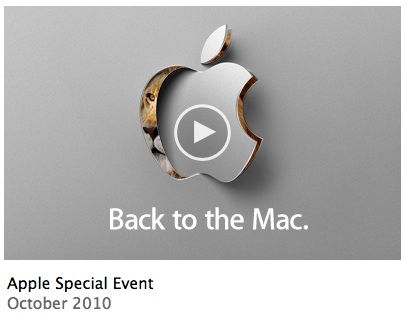 Apple has posted the full video from today's "Back to the Mac" media event as a podcast on iTunes, and the stream is also available via a direct link to the .mov file. The stream was initially available for users on Safari for Mac OS X 10.6 and iOS, but users on other platforms now have options for viewing the broadcast.

Apple should also be making the stream available in multiple formats for access directly through its special event site, but the video is not yet appearing on that site for the alternative browsers and platforms.

Apple made a number of announcements and product introductions at today's media event, as we covered in earlier stories:

Article Link: Video Stream of 'Back to the Mac' Media Event Now Available

The End of the Mac as we know it. Start hugging your iDevices... that's what Apple will be caring about in the next 10 years.

Mac OS X Lion is just the transition to all iOS devices, live with it. That's the truth.

...at least they filled a gap in the MB line!

I WAS the one said:
The End of the Mac as we know it. Start hugging your iDevices... that's what Apple will be caring about in the next 10 years.

Mac OS X Lion is just the transition to all iOS devices, live with it. That's the truth.

So what are you going to use instead? Windows 7? Ha ha ha!!

I have a feeling we will all get used to the new OS and it will still work just great, integrating itself into our lives.

I can't really imagine what's so horrible about it. The UI is a little different with launch pad and mission control, but you don't HAVE to use those if you don't want.

Mark my words, in the next few years, all Mac apps will go through the store and you'll have to have an active connection/account in order to use the app. You'll see all of Adobe's apps go there, along with Microsoft and anyone else who wants to lock down the software. Why else to you think that Apple spent all those millions building that gigantic server farm?
B

Does anyone else notice how frail Jobs seems? I didn't notice when I first watched, but compare his presentation from now to even the iPhone4 keynote and at least I seem to notice that he is definitely not as charismatic as usual. I also wonder why he didn't present all of the new features himself like he usually does. I really hope I'm making this up because Jobs is truly an asset to Apple and the entire tech world.

How long before Apple renames Mac OS X to "iOS Pro"?
B

Steve Jobs health concern trolling and unfounded "Apple is oppressing me and hates my Mac!" trolling all on page 1. Macrumors, you never let me down.
B

burgundyyears said:
Steve Jobs health concern trolling and unfounded "Apple is oppressing me and hates my Mac!" trolling all on page 1. Macrumors, you never let me down.
Click to expand...

Good to know it's not just me.

I came on to see if anyone else was having problems with this.
S

Downloaded the podcast version. Plays fine on my Mac but I receive a "Movie could not be played" message on my iPhone 4.

and no iWork update. iWork for iPad only works with existing documents from an almost two year old version of iWork for Mac. So we're all supposed to upgrade from '08 to '09 at full price, and what happens when '11 is finally released? Another full price upgrade?
P

Yeah, my iPad couldn't play it either. This sux. I mean how could you botch up a standard iOS compatible video encoding?
Q


pika2000 said:
Yeah, my iPad couldn't play it either. This sux. I mean how could you botch up a standard iOS compatible video encoding?
Click to expand...

It looks like the podcast video only plays in iTunes or the old Quicktime player on the Mac. It doesn't play on my iPhone 4, my iPad, or in the new Quicktime Mac player. Very annoying.
R

I´m underwhelmed by the press conference.
There was really nothing new.

So OSX Lion is all bout bringing iPad to the Mac. In other words, we have seen it before.

Mission Controll seems more like Apple desperatly wants to innovate something new like Expose, but it´s basically the same.

The Macbook air looks exactly the same as the old one. I was here hoping for "the worlds thinnest computer", but no such thing. The aluminum unibody is also starting to get boring. Are Apple no longer able to create a completely new look for their computers?

I also think its strange to see Apple announce stuff coming out in more seven months. Usually what they announce are available instantly. I kind of expected Lion before christmas.

Finally, the biggest news were coming from iLife11, and I don´t think the changes were as dramatic as Steve Jobs wanted us to think.

I watched it on my 1st gen Apple TV and it really struggled on the split screen sections.

Watched the Live Stream on my iPad live, coped fine, got rather blurry when lots of movement happened on the screen.

bperrella said:
Does anyone else notice how frail Jobs seems?
Click to expand...

I noticed he was walking around and talking, not laying in a bed eating ice cream.

Too many whiners in here. Yesterday I watched the live feed full screen from start to finish and was very impressed.
S

I mentioned this on the spoiler-free thread. It doesn't play in Quickime, it crashed iChat if you try to share it, but my WD TV Live Plus played it just fine. Weird!

it seems like apples presentations are getting more and more disappointing. i dont want my Mac to be like my iPhone...

OllyW said:
I watched it on my 1st gen Apple TV and it really struggled on the split screen sections.
Click to expand...

Wow, I thought this was just my machine (I have aTV Flash installed), but now I see others have exactly the same issues. I was having problems with the split screen sections of the presentation also. Weird.

Apple forgot to invite women to attend the event. Perhaps a few snuck in.