Vodafone UK Warning iPhone 4S Users Not to Upgrade to iOS 6.1 Due to 3G Issues

Vodafone UK today began sending out text messages to iPhone 4S owners on its network instructing them not to upgrade to iOS 6.1 due to issues with 3G performance. iOS 6.1 was released to the public on January 28.

If you've not already downloaded iOS 6.1 for your iPhone 4s, please hold off for the next version while Apple fixes 3G performance issues. Thanks
Click to expand... 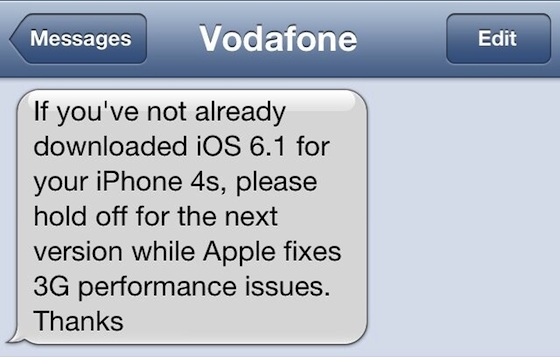 The carrier has yet to offer additional information on the issue, but Apple's iOS 6.1.1 update has just entered developer testing earlier this week. Vodafone's message suggests that this update will address the 3G problem, but neither Apple nor Vodafone has explicitly confirmed that this is the case.

Update: Vodafone has now posted a notice on its support forums addressing the issue.

Some customers may occasionally experience difficulty in connecting to the network to make or receive calls or texts or to connect to the Internet. Apple is working on a solution to their software issue. These connection problems are intermittent.

While Apple's investigations continue, we would recommend that anyone who has not yet installed iOS 6.1 on their iPhone 4s should delay doing so until Apple has confirmed that their problem has been fixed.
Click to expand...

Still better than nothing I guess...

Must admit for the last week I have been getting absolutely terrible 3G coverage, calls not getting through and then being notified of a voicemail.....seems to be when I am on a WiFi environment and a call comes through it never gets there.....

Just going to update to 6.1.1 and see if it makes any difference as cant go backwards....

What do you think of the beta? I find no different at all. No bugs
R

Seems likely that some Android fan at Vodafone is just trying to stir the pot.
C

I've had a similar experience on O2 UK.

A little unrelated to the 3G topic, but I'd just like to state that Vodafone is the worst company I've ever had dealings with. I've been on their contract for 23 months (just one more month until it's over, nearly there!) and they can wholeheartedly suckle from my left testicle.

Haven't they abused you enough?!

Maybe you should try AT&T?
They suckle too!

Ulp, just upgraded to 6.1 and jailbroke today. Am on o2. Still, between home and work and kids, I am rarely away from wifi, and even crappy 3G is good enough for the limited amount of actual mobile browsing I get to do when I'm not stuck 50foot underground.

Hmm... I have noticed my data connection cuts in and out at home since I upgraded to 6.1 - it was never very strong at my place, but this never used to happen.

So if the update itself is at fault (that's an assumption, obviously) - would it specifically be the baseband update that's problematic?

Defender2010 said:
What do you think of the beta? I find no different at all. No bugs
Click to expand...

I upgraded to 6.1 and am on Vodafone. But as they seem to have virtually 0 3G coverage anywhere I go anyway I haven't noticed any difference. Perhaps fixing my wifi bug where even though I am connected to wifi networks that worked fine on the 3GS but cannot stay connected (without having to reboot) on the 5 would be nice! Sorry for the rant.

Vodafone have a 3G network??? Not anywhere I go regularly they don't
P

That's strange, I'm on Vodafone with a iPhones 4s and I went straight to iOS 6.1 when it was released. I have had no problems what so ever. In fact it could possibly have been better recently. Still hate Vodafone though.
Last edited: Feb 8, 2013

I was on Vodascum with my iPhone 4. When I was in between the 4 and 5 I moved to 3 on their rolling 1 month contract because vodafone's 3G coverage was shocking.

3's network, for me, is awesome and I roam around the country. When iPhone 5 came out, I stuck with them on the £37/mth contract which includes all you can eat data. This week they've also said 4G will be standard so I think I will get it when they start rolling it out.

I am "nearly "an advocate of them, I think they're often overlooked due to them not having a great network in the past but when you're looking to move I would give them. Look-see!

Why am I "nearly" an advocate of them? Their customer service is shocking! But over the length of a contract you shouldn't have to contact them that much, do it all in store!

Nothing to do with the topic as such but from one ex-vodafoner to another!

How about the wake from sleep issue as well?
R

The same problem exisit with Vodafone India as well
K

Same problem here in Finland with the biggest carrier Sonera: bad connections, no calls at all etc. After the latest update there is no button for 3G to turn it off. Only LTE. My biggest concern is batterylife. In 8h my iPhone5 is dead...

A little to late for that. When is the next update?

My day always goes down a little whenever I hear or read about Vodafone.

... traveling in the UK last weekend my iPhone 4S, with IOS 6.1, roaming on Vodafone UK mysteriously stopped working one evening. I put it down to the hotel being in a black-spot but it would not reconnect several miles down the road. Solved with a complete reboot.

Not a lot of love for Vodafone!

Last year one of their retentions team tried to get my wife to stay with them. He ended up being extremely rude and telling her she didn't have a clue. An hour later the same idiot phoned me. He tried to deny it but I had some fun with that.
You must log in or register to reply here.
Share:
Facebook Twitter Reddit Email Link
Register on MacRumors! This sidebar will go away, and you'll see fewer ads.
Sign Up
Top Bottom