The war of the super-smartphones continues to heat up, and, at the moment, most of the combat seems to be between Apple's iPhone and the multiplying array of competitors running Google's Android (NASDAQ: GOOG - News) operating system. 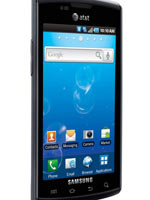 ©Samsung
The AT&T Captivate and T-Mobile Vibrant have bigger screens than the iPhone but lack frontfacing cameras.

Despite the weak economy, consumers seem to crave these hand-held computers, which typically cost around $200. Apple this week said it can't make enough of its new iPhone 4 models to meet strong demand. HTC, the Taiwanese-based manufacturer behind many of the better-known Android phones, also is struggling to meet demand for models like the Droid Incredible on Verizon (NYSE: VZ - News) and the Evo 4G on Sprint (NYSE: S - News).


Now, the Korean electronics giant, Samsung, has begun rolling out an impressive new line of iPhone competitors that run on Android. These new super-smartphones are called the Galaxy S Series, and Samsung has managed to get all four top U.S. wireless carriers to agree to start selling them this summer. They share most of the same guts, but carry different model names and exterior designs.

I've been testing the first two Galaxy S phones, the T-Mobile Vibrant and the AT&T Captivate (NYSE: T - News), both of which cost $200 with a two-year contract. Neither has all the features of Apple's latest model, like a front-facing camera for video calls or an ultra-high resolution screen, but they are worthy competitors. They have some attributes the iPhone lacks, like bigger screens and better integration of social networking.

The T-Mobile Vibrant has rounded corners and a prominent border that make it look very much like last year's iPhone 3GS model. The AT&T Captivate is more angular and, to my taste, looks sleeker. Though the two phones share the same battery, the Vibrant claims better battery life. The Vibrant is longer but a bit lighter.

For Android phone makers, a key challenge is to differentiate their models from others offering the same operating system. Samsung has chosen to do so by combining a design that's almost as thin as the iPhone 4 with a generous, four-inch screen. That's significantly bigger than the iPhone's 3.5-inch display, but smaller than the huge 4.3-inch screen on the Evo and the new Motorola Droid X (NYSE: MOT - News), which would force the phones to be larger.

In my tests, phone calls on both models were crisp and clear. Reception on the AT&T model was about the same as on the iPhone 4, which only works on AT&T. The five-megapixel camera took sharp pictures. The camera also did a fine job with video, which is high definition. Battery life was good, though not exceptional. The phones lasted through an average day of varied use.

The screen on the Galaxy S is based on a different technology than those on most other smartphones. It's called Super AMOLED, and Samsung claims it has better color reproduction, contrast, outdoor visibility and brightness. To my eye, the Galaxy S screens did look very good, but seemed no better, indoors or outdoors, than the iPhone 4's screen and were slightly less sharp.

Samsung has also added some of its own touches to Android. Users can add Samsung "widgets," such as a Buddies Now module that quickly allows access to your closest contacts. There's also something called the Social Hub, which integrates social-networking updates and media with contact entries. This is a common feature on Android and Palm phones, but isn't present on the iPhone. 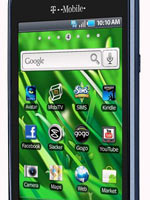 While it's improving rapidly, Android still isn't quite as smooth as the iPhone's software, and on some Android models I've tested, it can slow down or have a jerky quality. Not so on these Samsung models. Performance in every function I tested was snappy.

Another nice touch on the Samsung models is a generous amount of internal memory -- 16 gigabytes -- in addition to the common removable memory card, which in this case holds two gigabytes but can be replaced at extra cost with a roomier card.

Also, Samsung says the new phones can hold up to two gigabytes of third-party apps, the most I've seen on an Android phone, which, unlike the iPhone, places limits on total app storage.

Like other Android phones, the two Samsung models offer around 65,000 third-party apps, including popular titles like the Kindle e-book reader and Facebook. That's far fewer than the iPhone's 225,000 available apps, but well above the measly 7,000 or so apps available for the BlackBerry.

There are some drawbacks. Like other Android phones, the Galaxy S models don't come with a program like iTunes, which allows easy synchronization with content on a PC or Mac. You can plug the phones into a computer for manual transfer of files, but this only works smoothly on Windows PCs. On Macs, you must turn on something called "USB debugging" to make this work.

I also wasn't crazy about the home, search and other buttons on these phones, which are found on a panel below the screen but not easily visible until you touch the panel and light the buttons up. That, in effect, means you have to touch twice to use them.

Still, for consumers who prefer Android, or who -- in the case of the Vibrant and the coming Sprint and Verizon versions -- would rather not be on AT&T, the Galaxy S phones present an appealing alternative to the iPhone.

Though that is a fair review, the writer obviously does not know about Doubletwist which is a program very much like iTunes and is compatible with MOST Phones. They dont just limit it to iPhone or just Android.

So there is an easy way to sync your music, Movies and Apps. It is intregrated with Amazon and linked with the Android Market.
B

To sum it up: If you can't get an iPhone, these should be your second choice.

bumzo1 said:
To sum it up: If you can't get an iPhone, these should be your second choice.
Click to expand...

Or perhaps if you refuse to go to AT&T. There are a couple Android forums and there are many former iPhone users in there making the switch for whatever reason.
P

Vegastouch said:
Though that is a fair review, the writer obviously does not know about Doubletwist which is a program very much like iTunes and is compatible with MOST Phones. They dont just limit it to iPhone or just Android.

So there is an easy way to sync your music, Movies and Apps. It is intregrated with Amazon and linked with the Android Market.
Click to expand...

Yeah, sounds like the author is an android newbie... doubletwist is awesome, it's like itunes, but works on a whole slew of devices (not just android).