I'm running El Capitan in Mac Pro 3,1 8-core @3.2GHz with Elsa GTX680 in PCIe slot #1 but Web Driver would not install. It always produces an error message at the end of the installation process and when I open System Preference, the NVIDIA Driver Manager preference pane is visible at the bottom but a click on the icon only produces an error message that says "Please install again".

Similarly the Cuda driver also produces an error message at the end of its installation process but Photoshop CC is showing GTX680 as GPU in its preference panel and SETI@Home in Boinc Manager is working as screen saver.

Before installing the drivers I have all security software turned off and access privilege sorted out by TechTool Pro but this happens only on my external startup SSD and I have no problem with my internal SSD. I'm wondering what's going on and if anyone think of a possible cause, an input will be appreciated. Is it okay to have Cuda driver alone running?

What is the error message?

Yes I deleted the Preference Pane. This is how the error message reads. 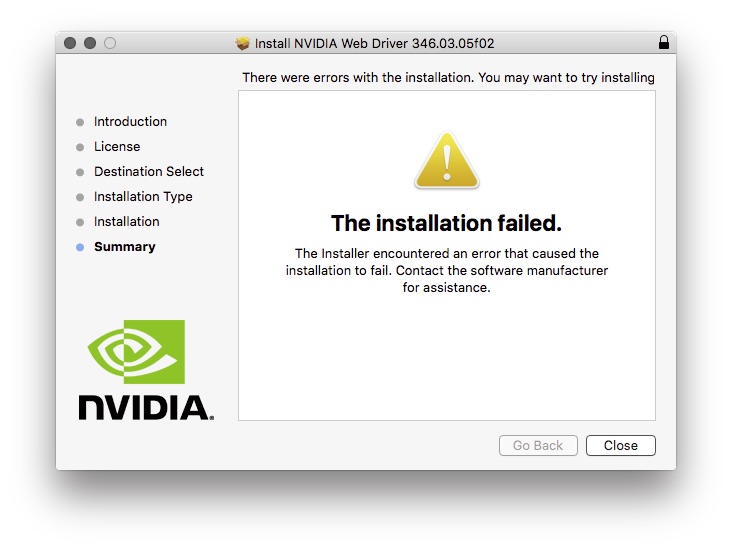 Well, I still have this problem unsolved and I must have been falsely optimistic that a new version driver would install. Instead the situation has not changed and new WebDriver simply refuses to install. I'm starting to wonder if there may be some remaining pieces or parts of the driver in my Mac OS which I didn't quite uninstall when I removed the icon from the Preference. I realize I should have uninstalled the driver using the Uninstall button but instead I just right-clicked the icon and removed it. Would someone know what parts go into which folders of Mac OS when WebDriver is installed? I may have to hand-pick all the residues out and throw them away.
Comment

You could try AppCleaner or CCleaner. The former is highly rated but I've not used it. The latter I've used, but only on Windows--haven't tried it on OS X yet.
Comment

Have you tried using the "Uninstaller" that is in the "Nvidia Driver Manager"? And yes, you can use the Cuda Driver with the Apple Driver.

Lou, the Uninstaller button is out of my reach as I cannot install WebDriver to begin with and that's the problem. If I can get WebDriver to install again all my problem will go away without uninstalling the program.

As for the app deleting app, ActionableMango, I normally use AppDelete but I don't know if it works on a Preference pane. The icon on the bottom of preference window can be removed by right-clicking'n'drag method but would that also remove all associating files from Library?

So if neither of these can be used, then I only have to delete bits and pieces which I installed previously but have not been physically uninstalled. I just don't know where to look.

Or this problem may have an entirely different cause. Thank you guys for your help. I will try some more.
Comment

This problem has finally been resolved.

The latest drivers wouldn't install and I used Pacifist and executed the main installer inside the package and then the following message appeared. Evidently System Integrity Protection had been turned on somewhere in the past and this prevented the drivers from installing. I turned it off using a simple Terminal command and both Web Drivers and Cuda Driver installed successfully.

For your reference, the following is the message that appeared:


The operation couldn’t be completed. Operation not permitted

This error appears to have occurred because one of the directories you tried to write to was protected by OS X's System Integrity Protection feature.

System Integrity Protection is a feature of OS X which protects certain system files from being modified, even by the root user. This feature enhances the security of the OS by preventing malicious installers and/or rootkits from tampering with the OS.

If it is critically important for you to make changes to your system that involve overriding this security feature, you can disable System Integrity Protection by booting your Mac in Recovery Mode by holding down the Command (⌘) and R keys during startup, then choosing “Terminal” from the Utilities menu and typing “csrutil disable” without the quotes, followed by a Return. After you make your changes to the system, you should repeat these same steps, typing “csrutil enable” without the quotes and followed by a Return into the Terminal. This will re-enable the System Integrity Protection feature.​
Comment