What Camera do you use? 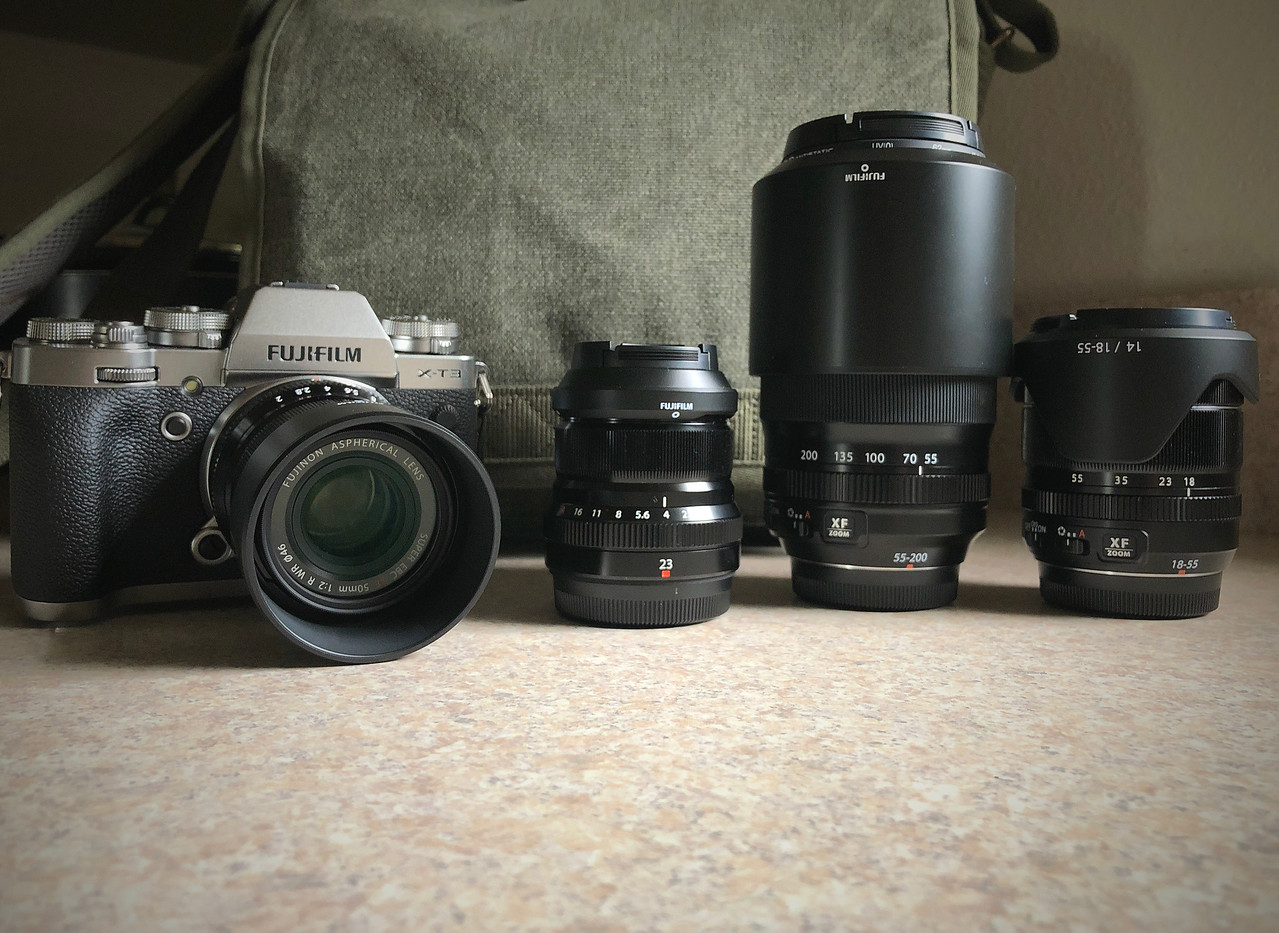 I got a Nikon Z6 last month and really love it. It has become my primary camera. It replaces a D800 that I will continue to use from time to time - I have gotten in the habit of using two cameras.

i also have a D700 that I won't sell, but now will only be used very rarely. Most likely it will go to my son, who has expressed an interest in photography, but that has taken a back seat now that school has started again (he's only 12).

I started off with Canon but moved to Nikon after being frustrated with the Canon focusing system. Although that has largely been fixed now, I still love my Nikon gear and really appreciate that Nikon made an adapter for their mirrorless system so I can still use all my lenses.
E

Started with Canon, went to Sony, discovered Leica, changed from Sony to Fuji with a brief flirt with Olympus M4/3 along the way, then Sold my Fuji gear to fund my Leica habit.... Currently M4-P film, M9 (as above, because it is an M9), MM and a CL.

In parallel to this, Sony RX100 MKiii still rockin as a carry everywhere option and a Canon AE-1 and Nikon FM and Rollei for periodic giggles....

Having said this, there is another system in my future again as the Leicas don't expose for more than 30 seconds and I would like to do more long exposures. However this time, the candidates are not full frame or medium format etc as I now absolutely realise I am always gonna be crap at this hobby so no point spending mega bucks anymore.
Reactions: Scepticalscribe

Sony a58 - bought 2014 (saw a great deal on "dealnews.com" and grabbed it). I like it, but it looks like Sony has abandoned the A-mount line, so there's no "pathway forward" other than to use it until it breaks.

Canon EOS R - I liked it when it was new, but didn't feel like "paying the price" then, so I waited almost a year. Then I found an excellent deal through "canonpricewatch.com" and got it new for hundreds less than Canon sells as refurbished. Got the battery grip and USBc charger as "part of the package", as well.

I didn't "need" the R, but I figured I'd probably never own another full-frame camera, so, what the heck!
Now I need a good wide-angle zoom for it, good macro, and the Canon EF 100-400 which looks great but it's pricey!

Fuji x100f for travel and Nikon d850, both of which I absolutely love. I'm inching towards a z7 for a lighter travel kit while still being able to use my Nikon F lenses if I don't want to be quite as light. My iPhone X shows up every now and then too, and I may or may not upgrade this year.

Started with a Pentax ME Super (a lovely little camera, one of the lightest and smallest SLR cameras around), graduated to a Pentax P-30T.

Then, I migrated to Nikon: I had a Nikon F75, and after that, a Nikon F100, though I had planned on the purchase of a Nikon F80, but was persuaded to purchase a F100 instead - a lovely camera that was subsequently stolen.

That was when I switched to Leica.

My first Leica camera was a R7 (with which I had a Leica R 35-70 lens), and I currently use a Leica M6 with summilix lenses. That means that I am still using film cameras.

Sony RX100 M7 for travel and to always carry in backpack

Last film cameras were Canon, however when switched to digital none of my FD lens would work so Canon basically told me I was free to choose any system as I was starting over. That experience basically made Canon second choice and went with Nikon. Progressed through the various models up to a d610. While I did tote that around Europe several years, with daughter's wedding in the Canary Islands, borrowed a friend's newly introduced Sony A7. When considering the Nikon upgrade, Sony entered the picture. Additionally, I didn't have any Nikon 2.8 glass which eased the decision as I knew the Nikon/Sony adapters were (and still are) crap compared to Canon Metabones. Switched to Sony and the rest is history. Currently use an A6000 and my primary is the A7RIII which very satisfied with and would/will upgrade the a6000 before I went to the a7rIV, and the III does everything I need

Some oddities here. I currently have:

Hasselblad HD3II-39 - medium format CCD sensor, lovely image quality, lovely handling etc. The Leica is a little smaller, lighter and more versatile so this one was meant to be sold by now but I am having problems parting with it.

Canon M5 - because I needed a small, light camera as a backup/travel option and it works with the few Canon lenses I still have.
Reactions: fathergll

I started this thread, but I failed to include my details 😨

I have as many of you know, an OMD EM5 MII, I generally live within two lenses, a 12-40 f2.8 lens for 90% of my shooting, but also a 14-150 f4 - f5.6 lens. I also picked up a G5X Mark II, and I'm looking at this as something to always have with me, so I don't miss out on opportunities, or when I travel and don't want to deal with my M43 gear. I'm kind of thinking the compact camera will be a good fit for DisneyWorld, thanks to the heat and crowds.

I started off way back with a Nikon D80 camera (I still have it and it still works) then last year (around this time) I decided to get serious with my photography. I initially was going to go with the Nikon Z7 and even pre-ordered it, but after still checking out other Mirrorless cameras decided to cancel the order and went with the Sony A7RIII. I was happy with the resolution of the camera, but I really like taking pictures of birds-in-flight (BIF). Then around the holidays the Sony A9 dropped in $1000 in price and Amazon made it where I could pay it off in 3 payments. The temptation was too great for me, so I pulled the trigger and bought the A9. I originally was going to sell the A7RIII, but decided to keep it for the resolution. The A7RIII is my landscape, portraits and macro photography camera; whereas, the A9 is my BIF photography camera (or any thing that moves fast). I think these two cameras will keep me perfectly satisfied in the years to come (hopefully). I do have two telephoto lenses right now (100-400mm and the 200-600mm), but I will probably end up selling one of them depending on which one I use the most. Right now I am leaning in selling the 100-400 lens as the 200-600 balances better on my Wimberely Gimbal and has a little extra reach. However, right now I just I'm going to hold off selling until I am really sure of which one I'm going to keep.


Curious about this A9II "rumored" to be announced next month. That thing is going to be a beast, imho.
Reactions: MacNut and Strider64


Curious about this A9II "rumored" to be announced next month. That thing is going to be a beast, imho.
Click to expand...

Even if the A9II is only 25 percent better than the A9 the wow! factor will be through the roof. I might have to stop myself from reading about the A9II when it is introduced. If it is rumor is true and it has 36MP I might be tempted to sell my A7RIII and A9 cameras (possibly the 100-400 lens) to get the A9II. However, I like having two cameras as it forces me to concentrate on the type of photography that I'm currently doing. The only thing now is when I crop a BIF the image size is reduced considerably which is kind of a bummer. Though I mostly do web work making the 10 - 12MP size images good enough quality for the web.
Reactions: mmomega

I was pretty short with my original answer, but I stick with m43 for the great portability. My last outing I was able to carry my camera+lens and had the other two lenses in my cargo shorts pockets. Despite a LOT of walking on a hot day, it was never really a burden, and I even had to carry a 3 year old for some of that time. I wouldn’t mind a FF like the A7II, but it’s hard to beat my m43s portability. It might be its best selling point.
J

Strider64 said:
Even if the A9II is only 25 percent better than the A9 the wow! factor will be through the roof. I might have to stop myself from reading about the A9II when it is introduced. If it is rumor is true and it has 36MP I might be tempted to sell my A7RIII and A9 cameras (possibly the 100-400 lens) to get the A9II. However, I like having two cameras as it forces me to concentrate on the type of photography that I'm currently doing. The only thing now is when I crop a BIF the image size is reduced considerably which is kind of a bummer. Though I mostly do web work making the 10 - 12MP size images good enough quality for the web.
Click to expand...

I'm with you. If half the rumors are true and the price is right.... my wife might kill me when it goes on pre-order.
I held off on the R4 just due to the rumors of the A9II coming soon.
I'd most likely get rid of the 6000 and the R2 and just have the RIII and the 9II.