What hardware are you folding with?

In watching the GPU usage graph in Windows 10 while GPU-only folding, it's interesting to see that it bounces around 30% usage. It has peaks and valleys, but the most I've noticed it go up to is something like 35%, and a lot of the time, it's crunching away on the FAHControl pane, but showing hardly any GPU usage. I guess the GPU does some work, and then the system has to catch up, or something. It's making 430,000-440,000 PPD in this manner. The CPU usage in this setup is at most 9%. It's nice that it's not making a lot of heat or using much energy, while still doing a lot of good work!

Edit:
Watched it from the very beginning of a job, and now it's using 86% GPU and 10% CPU, give or take. It's still dropping to little to no GPU and/or CPU from time to time, but I had expected it to be pretty consistently using most or all the GPU, and it's funny to see that not be the case.
Last edited: Nov 14, 2017

In Win10 Task Manager, I noticed I could switch views on which GPU engine was running. I chose Compute_0, and found it runs about 95% pretty consistently, yet "GPU Utilization" still only shows 9% most of the time. So, for some reason, the compute engine is not represented as an aggregate of use. In one article I found about Win10 Task Manager, I found this comment below the article:

– For the “Performance Tab”, you say that “Instead we opted to pick the percentage utilization of the busiest engine as a representative of the overall GPU usage”. if I run Folding@Home with 4x NVIDIA GTX 1080 Ti GPUs (two of the GPUS are Linked), each GPU has overall GPU usage/load of about 8%, while its Comput_0 engine has utilisation/load at about 90%.

– For the “Processes Tab” you say that “The solution we decided to go with is to display the utilization of the busiest engine, across all GPUs, for that process as representing its overall GPU utilization”, and “we added a second column, which indicates which GPU and Engine combination the utilization being shown corresponds to”. However, as in the previous example, the GPU colume indicates an overall GPU usage of about 8% and all entries below (corresponding to processes) indicate 0% GPU Usage. Running MSI Kombustor doesn’t change anything. All processes have 0% GPU load.

I presume these are NVIDIA driver (tested with driver version 388.13) issues, or Windows API issues, so please be aware of these."

Here's what my Task Manager shows: 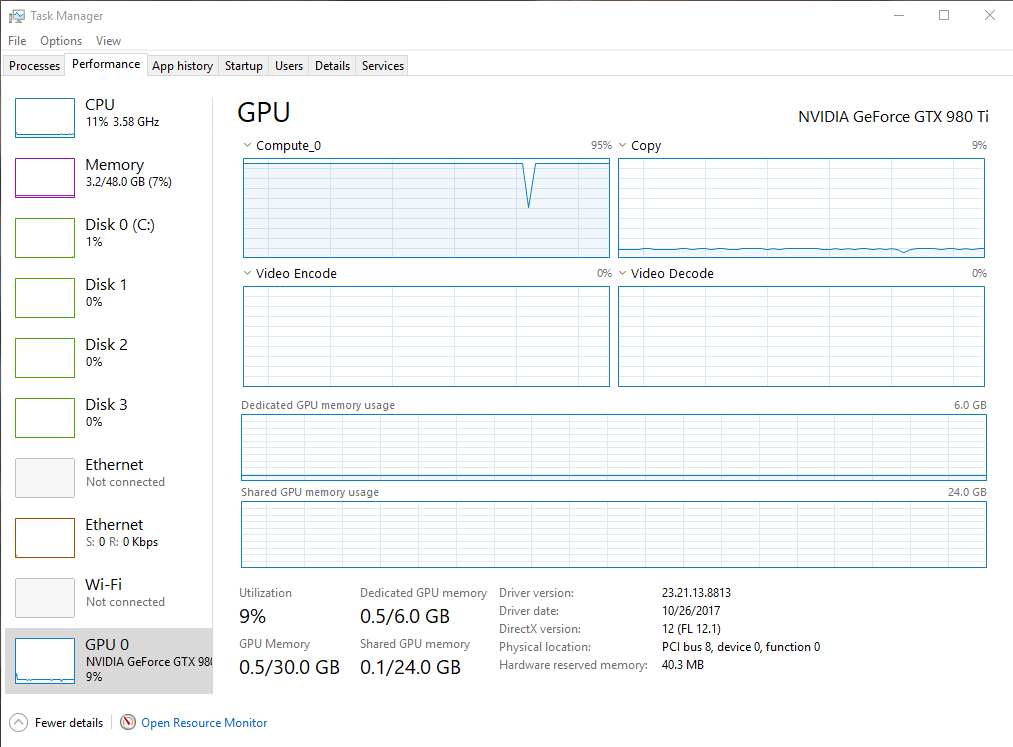 Each project / workunit is writing checkpoints in a defined Intervall. While for CPU we can influence this Intervall it is not possible for GPU. Here the project owner define the Intervall.