My daughter just sent me a photo of her 11" MBA. It has obviously suffered from a swollen battery. I have not had a chance to look at it, aside from the photo (attached below). The replacement batteries are pretty reasonably priced, and on this model, they are held in place by screws instead of glued.

My question is this... what might I be looking at in terms of other internal damage? I'm thinking for $60 or so for the replacement battery and about 20 minutes work, it might be worth it to see if I can make it work again...

Any thoughts about what could have been damaged? System board? Keyboard? Trackpad? Is there good chance that the other components have just been pushed out of place without having sustained permanent/total damage? 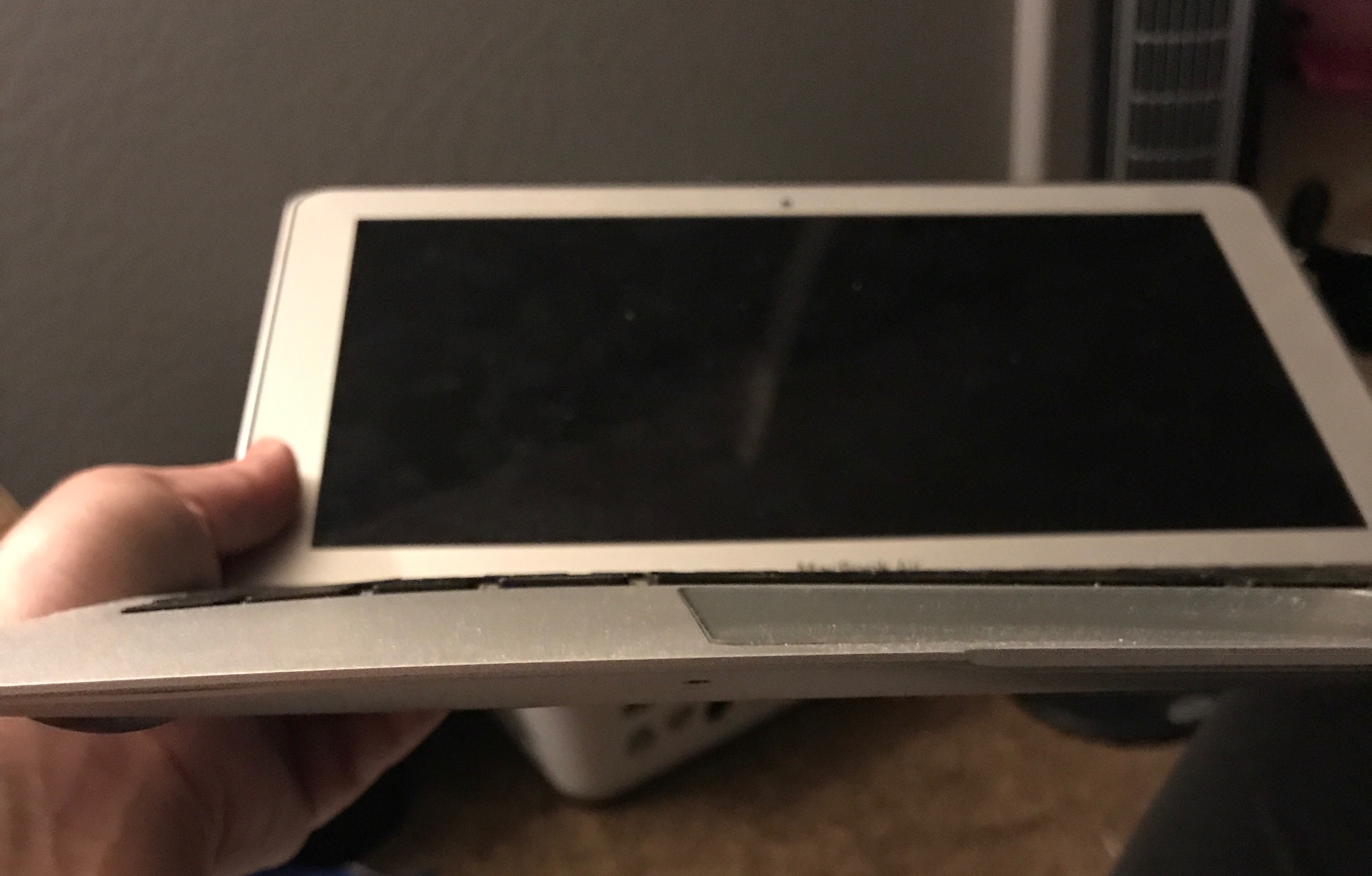 Only way to know,if you want to be sure,is to take it to Genius Bar.
Reactions: Beachguy

Due to the fact that the battery is next to all the other components not above of underneath and it has swollen upwards, i would imagine that the only thing that it has done is bent the aluminium directly on top (as you can see in the pic) and perhaps pushed the keyboard up a bit and thats probably it. Th trackpad is very durable so is probably fine.

The only way that you will know is to remove the battery and see if the misshaped areas go back down. If they do not you could try gently pushing on the affected areas of bent aluminium (i managed to reshape the damaged corner of my MBP 15" with a hammer after i dropped it and misshaped it lol) because aluminium is very malleable.

When there is a new battery fitted and the mac is all sealed up again the trackpad may feel loose or it may be visibly lower than the palm rest, and that would be because the force of the swollen battery might have bent the clips holding the trackpad. If that is the case then you can remove the trackpad( quite easy) and try to bend them back carefully with a screwdriver, and the trackpad should sit perfectly flush again.

I should warn you that these batteries as you probably know contain lithium and i would advise you to be EXTREMELY careful if and when you remove that battery! As i have heard before on a forum which i now forget of someone whose battery had swollen and then had actually had a minor explosion due to the disrupted lithium in the battery due to the swelling. Thus if i were you i would remove the battery quickly and go put it somewhere like a fire place or outside in the garden.

I know that sounds extreme but you never know with stuff that contains harmful chemicals, the fact that the battery has swollen indicates that there is serious trouble inside it already and since i am advising you i am considering the safety aspect too.

As Stefan said above, if you want the safe route, just go to a genius bar. This issue with swelling batteries I'm pretty sure is meant to be a thing of the past now.

Lastly, you say $60 for the battery. Thus i presume that you are not interested in one from Apple which they would fit for you because that is twice that cost. https://www.apple.com/uk/batteries/service-and-recycling/

I would recommend sticking with a legitimate Apple battery myself, and Apple should probably be replacing the current battery free of charge because it has swollen which isn't meant to happen.

As the battery (1,000 + cycles) in my daughter's 2011 MBA swelled, she had to press the trackpad with increasing pressure to get it to click. When we replaced the battery, the trackpad needed replacing, too. I think that was an extra 30-40 dollars.

kohlson said:
As the battery (1,000 + cycles) in my daughter's 2011 MBA swelled, she had to press the trackpad with increasing pressure to get it to click. When we replaced the battery, the trackpad needed replacing, too. I think that was an extra 30-40 dollars.
Click to expand...

Glad to know you got it sorted. Did you take it to be done at an apple store? The replacement trackpad that i got for another Mac from around that age cost £5, so $30-40 seems ridiculously high imho lol

Hope that old battery has been destroyed. The last battery in my own Air was not too far off 1000 cycles and when i got it out it looked and felt like new, so your old battery there must have been rather dodgy

thanks all... headed to Apple for an evaluation.

dwfaust said:
thanks all... headed to Apple for an evaluation.
Click to expand...

I will be very interested to know how you got on at the Apple Store as I have one that has done exactly the same thing. I hadn't used it for about eight weeks as I had bought a new Air but I dug it out as I wanted to check something on it and found it all swollen.

I finally got the 11" MBA from my daughter and removed the battery... was able to get it to boot and run on direct power (no battery, only power adapter)... so, apparently, no additional damage... so, now to find a quality replacement battery at a reasonable price. 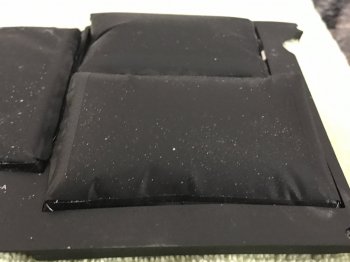 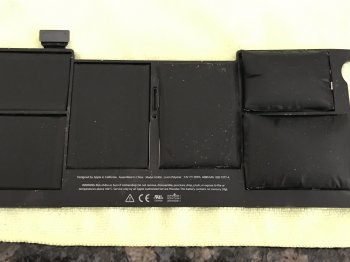 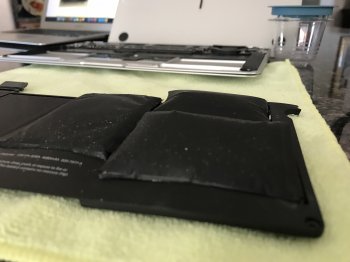 dwfaust said:
I finally got the 11" MBA from my daughter and removed the battery... was able to get it to boot and run on direct power (no battery, only power adapter)... so, apparently, no additional damage... so, now to find a quality replacement battery at a reasonable price.

Glad there is no apparent issues! I do hope that after the battery is replaced this doesn't occur again. Let us know what kind of battery you decide on.
H

Glad to hear you got it open safely. I imagine with that many charge cycles, the mba was no longer under warranty. While it would be ideal to get an oem replacement, there are a few third party options that are reliable and reputable. Without knowing the model I can not provide an specific links. Good luck sir. As they say over at IFIXIT, repair is noble.

Just found out that Apple has marked the 2011 MacBook Air "vintage", which means that they don't service them or even have parts for them. Looks like 3rd party is the way to go...
K

dwfaust said:
Just found out that Apple has marked the 2011 MacBook Air "vintage", which means that they don't service them or even have parts for them. Looks like 3rd party is the way to go...
Click to expand...

better will go for used original battery with no to many cycles
Click to expand...

Thanks for that. Obviously you didn't waste any time reading the thread. But thanks.
F

dwfaust said:
I finally got the 11" MBA from my daughter and removed the battery... was able to get it to boot and run on direct power (no battery, only power adapter)... so, apparently, no additional damage... so, now to find a quality replacement battery at a reasonable price.

++++++++++++++++++++++++++++
I had a failed Apple A1322 in a MacBook Pro A1278 Unibody featuring a 2x2.4 Intel Core2duo, 8GB DDR3 Ram, 250GB of SATA hard drive and running Mac OSX 10.9.5 Maverick. Out of the 10 A1278 I checked, two failed because the batteries bulged pushing then crushing the trackpads and keyboards. On the pics, you can see that one of the Li-ion Polymer battery (Model 1322, 10.95V at 63.5 Ah, 846 cycles) expanded from 13mm to 33mm. Further, after being taken out of the laptop into a fire-proof box, it vented and might have caught fire judging by the soot. Looking at the web, this battery expansion is quite common: Apple replaced a few of these batteries during a very short period of time, and now asks for $129 to provide a spare. Fortunately, the battery in the A1428 Unibody is replaceable... provided you have a pentylobe screwdriver!
As far as I know, Apple refused to recall the batteries, only accepting to replace them on a very limited ‘one of a kind’ scale, while leaving most of the people without help with their battery problem. Most common comment of the Apple ‘Genius’ faced with a bulged battery was ‘you need to upgrade’ ! 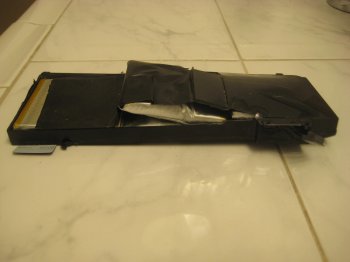 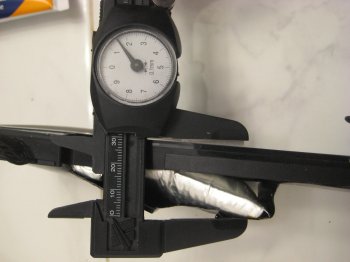 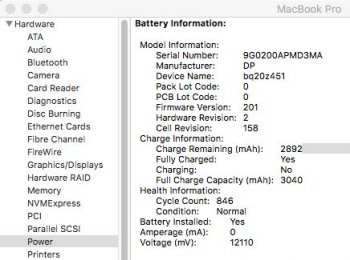